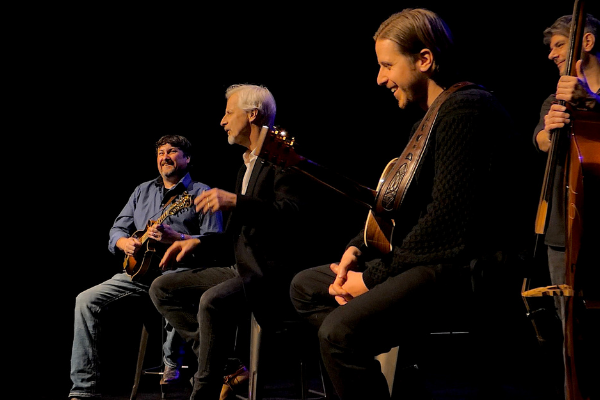 3 time ECMA Nominee and Capital/ EMI songwriter, Robert Thomas, and his band The Session Men have unveiled their new album, Parallel Lines. The all-acoustic Roots/ Americana album features some of his favourite and most-performed catalogue songs.

From ballads like “The Cradle, “In A Week or Two”, and “Twilight” to lyrically lever and intricate guitar hook-driven toe-tappers such as “Heartbreak Highway”, “Hot In Here”, and “Jacksonville”, the album showcases a veteran songwriter who is blossoming at the peak of his craft.

The band will be playing a Livestream via Facebook on Friday, April 22, 2022, at 7:30 PM ADT. Get more information HERE. Also, head to their website to see upcoming tour dates that you won’t want to miss!

Check out the album below, and find out more about Robert Thomas and The Session Men via our mini-interview.

My name is Robert Thomas. I was born in Halifax, Nova Scotia, and grew up in Winnipeg, Minneapolis, and Los Angeles. I am a career songwriter and have written for music publishing and advertising agencies since the 1980s. Over the years I have always focused on writing songs for other artists and have had many songs placed, held, or covered. Song placements never happen on their own and I am particularly indebted to Don Grierson, Capitol Records, for getting my songs through to Bonnie, Raitt, Kenny Rogers, Dottie West, Joe Cocker, and the (Dixie) Chicks. Over a career in publishing, a great many songs are written but too few actually ever get heard on the radio. As I turned 60, it occurred to me that it would be a good time and a joy to revisit my catalogue and re-record my favorite songs as they were originally intended with some of my co-writers and long-time “session men.” That process was so much fun, we wound up writing an album’s worth of new material and those songs and some of the old ones became “Parallel Lines.”

You have unveiled your debut album, Parallel Lines, what was the writing process like for this release?

An absolute joy. There was no pressure of a mandate – no other artist to target or arrangement format to adhere to so the musical and lyrical freedom was wonderful. It was also a reunion of sorts. I was able to sit down again with Ray Legere for a lot of the new songs and writing with him was effortless. He is encyclopedic on chord progressions and original, signature, guitar/mandolin/fiddle licks, so the songs we did together came very easily and were just a joy to write. I also wrote with my eldest son Selby, who is a Dalhousie Music grad and just starting his career as a writer/performer. That was very special and the new songs we did together I find to be very poignant. Then there are the notorious “session men” – getting back together with Jon Arseneau and Max Forbes after quite a while away has been great fun. Maybe because it has been quite a while since we played the old songs, Jon and Max were able to bring really nice new interpretations and energy to those songs that captures their essence perhaps more than the original demos.

The release is an all-acoustic Roots/ Americana album, what made you choose this route?

Harry Chapin penned a lyric – “remember when the music came from wooden boxes strung with silver wire.” Harry was a great influence on me and even though he’s gone, that very important tradition remains – songwriting and performing on acoustic instruments. Maybe it’s old school, but I can think of no other way of presenting my music. If a song comes across with just a voice and guitar or piano, you can trust that it is well written.

You’ll be setting off on an album release tour throughout Atlantic Canada in support of Parallel Lines, what are you most looking forward to when it comes to being back on the stage?

Rehearsals for this Tour have just been wonderful. The energy in the room has been terrific. It’s like new life has been breathed into the old songs, and there’s always the excitement of playing new ones. At this stage in my life, I think I have matured considerably as a performer and I am really feeling connected with the band and able to inhabit all of these songs in a way I might not have been able to in years past. That is exciting because I think that’s what moves people when they attend a live performance – feeling the singer and the band inhabit and present songs honestly and completely. This is the first time I can truly say I’m feeling this way about my music and I’m really looking forward to seeing how audiences respond.

This Summer and Fall, the touring will continue with a National Tour, where are you most excited to play?

As you know, it is exceedingly difficult to go from writing for publishing, essentially being unknown to the public, to being a performing act people are willing to pay to come and see. At this stage, we have to find our audience. The music that we’re doing honors the tradition of Harry Chapin, Stan Rogers and John Prine – fun, listening, storytelling songs the cover a wide range of tempos, topics, and feelings. With this wonderful band behind me, I am truly excited to play these songs anywhere across this great country that people are willing to listen.