The very first edition of LASSO presented by Bell in collaboration with Coors Original is fast approaching, and 12 carefully curated new acts have just been announced! On August 12th and 13th, Montreal’s Parc Jean-Drapeau will be the site of a massive country music party, with all the fixins fans have come to expect from evenko’s cutting edge music festivals. The multi-day modern country music festival is sure to thrill fans, old and new, with some of the most inspiring artists of the entire genre coming together for an energy hoedown!

In addition to superstar headliners Luke Bryan and Dierks Bentley, as well as previously announced favourites like Nashville’s Old Dominion (playing for the first time in Montreal), critical darling Ashley McBryde, Tenille Townes, and Kelsea Ballerini, the inaugural edition of the fest is chock full of talent and twang. 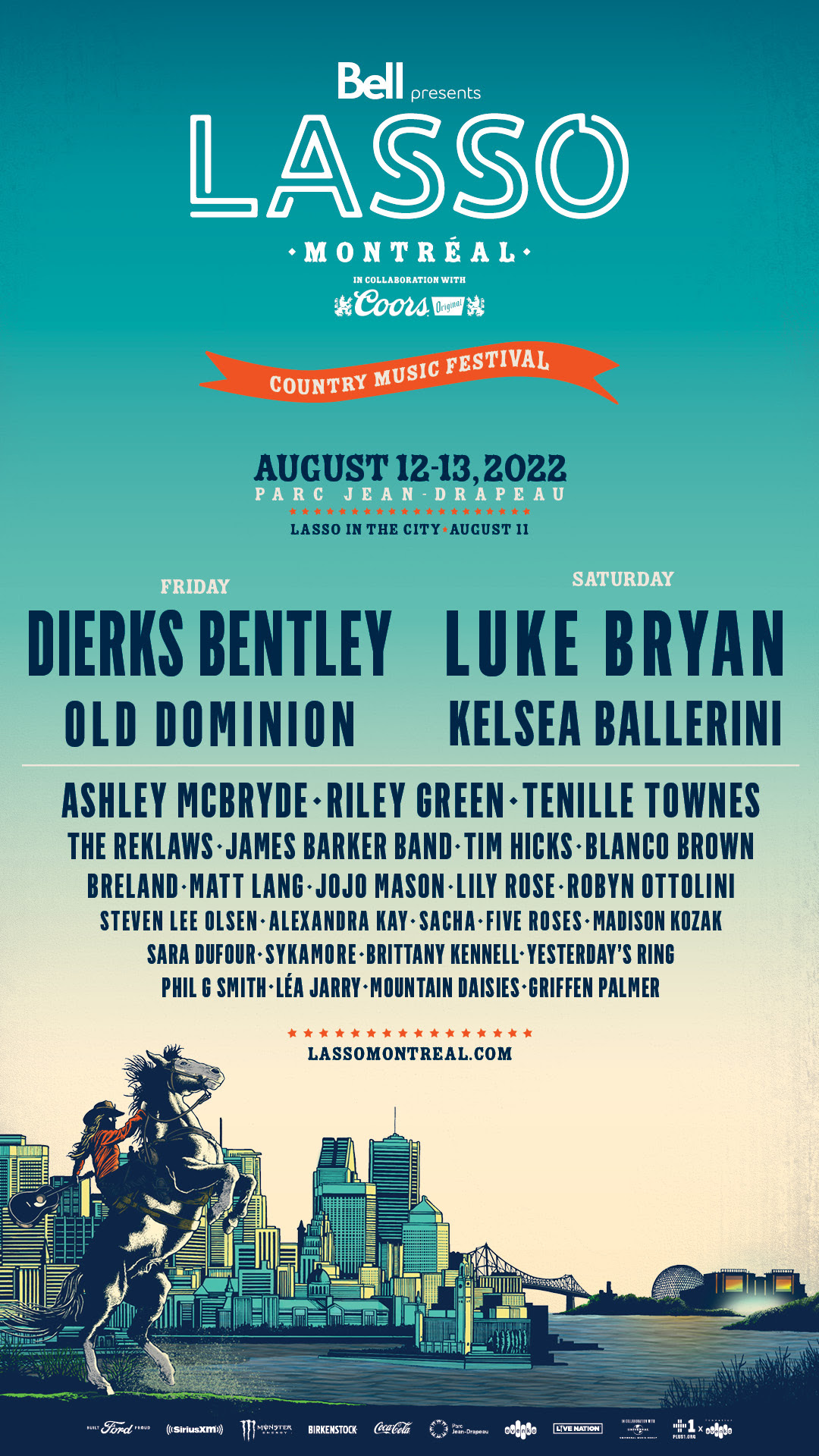 On Friday, Ontario’s James Barker Band, who are are all about feeling good together in the summertime will be on hand – the Juno-winning outfit also won Single of the Year at the Canadian Country Music Awards for the hit Chills, and they’ve got a new single out with headliner Dierks Bentley. Canada’s Steven Lee Olsen will prove why he is one of this country’s top country talents, having written songs performed by some of country’s most important artists like Keith Urban, Garth Brooks, Rascal Flatts, Billy Currington, The Judds, Dallas Smith and many others. American singer and reality TV star, Alexandra Kay (who is currently getting ready to go on tour with the one and only Tim McGraw) will surely add more fans to her TikTok following (which is growing exponentially everyday – over 2 million and counting), while Montreal’s country punkers, Yesterday’s Ring, will reunite for the special occasion. Rising star, Jojo Mason, will be on hand as well – the multiple CCMA nominee is looking forward to performing under a sky full of stars, while Quebec’s Mountain Daisies, Ontario’s Sacha (named one of CMT’s “Next Women of Country” for 2021), and Alberta’s Sykamore round out Friday’s lineup.

On the second day, Canadian country duo, The Reklaws, will have the audience singing along to their catchy tunes (their hit Long Live the Night was the most-streamed domestic song of all Canadian country artists). Festival goers will also have the opportunity to see 3 rising stars of Canada’s thriving country music scene: Ontario’s Griffen Palmer, winner of NBC’s Songland, and Madison Kozak, who has shared the stage with luminaries like Reba McIntyre, Tanya Tucker, Willie Nelson and Keith Urban, plus local talent, Phil G Smith, who will represent Quebec country in all of its swinging glory.

“We are excited to give our Quebec and Canadian artists an opportunity to perform on the same stages as some of the biggest names in country music.”