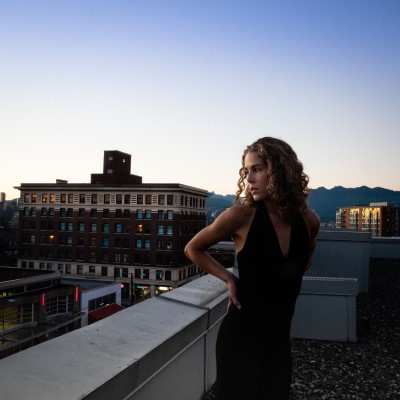 Vancouver’s Michaela Slinger is back with her new single “Don’t Wait” — her first release since signing with 604 Records.

Written in-part before her first-ever visit to Toronto and finished back on the west coast, the song has developed over time and across the country. Its infectious nature is something Slinger is known for as an artist — and rich in harmonies and lyricism.

Her first single “Flux” was released independently in 2019 and earned more than 250k streams. With the song’s growing popularity, Slinger was invited to participate, as of two fully-funded artists, in Canada’s Music Incubator in Toronto. Soon after she returned home to play Vancouver’s historic Vogue Theatre as a finalist in the Elevate Music Project.

We caught up with the west coast’s rising star to learn more about her songwriting process, releasing new music, and eventually getting back out on the road.

Can you describe to us how your life has changed since releasing your debut single, Flux, back in 2019?

I love looking back at the Flux release! It’s cool to have certain songs punctuate different moments in my life. I released that song in July 2019, and then I went to Toronto as a fully-funded participant in Canada’s Music Incubator. It was an amazing opportunity for me to be a full-time artist for two months. Once I returned home, I went right into the studio at 604 Records to record three tracks for a demo deal. I also starting gigging around the city, and I got to play some iconic Vancouver venues as part of MRG Group’s Elevate Music Project. In the middle of all of that excitement, I was offered a record deal with 604 Records that I officially signed in February 2020. I’m so grateful for all of these experiences.

Was there an adjustment period at all, going from releasing your music independently to working with a label?

Definitely, but maybe not in the way people might assume! I certainly hustled a lot as an indie artist, and it’s a quick crash course in just how many complicated facets there are within the music industry. Once I signed with 604 Records, though, it jolted me to work even harder because there were suddenly so many talented people putting their time and energy into growing my project. I think there’s a perception that once an artist is with a label, they sit back and cruise, but that’s not at all the case if you want to make the most out of such a special opportunity.

Has your songwriting always followed any patterns, or do you find yourself in a more experimental place than your early years as an artist?

I think anyone’s early years as an artist are total experimentation because you don’t feel like you know what you’re doing. That’s still pretty much the case, but I have some more established patterns in terms of how I write and I’m better at knowing what I like and don’t like in a track.

Some things have always been true for me: I’m quite lyrically-driven in my writing. Over time, though, I’ve incorporated new practices into writing: I used to exclusively write on the guitar, but now I also write on my keyboard, or I start with an interesting sound on Garageband or a vocal hook.

Tell us more about the new single “Don’t Wait” — it has a really infectious energy. And we know you wrote it while you were traveling across Canada. Did that distance and extended time change any of the early lyrics? Or did you have a clear vision from the beginning of what the song would become?

Thanks so much! Great question. The lyric idea came to me as I was preparing to leave home for a couple of months, so that core message was retained over time. I think the work I did on the song once I got to Toronto only strengthened it because suddenly I was actually in the position of being far away and thinking of someone.

Before I flew out, I quickly recorded the idea on my phone. It was just guitar and vocals. The big sound and infectious energy came as I built up the track in Toronto in the writing room at Coalition Music. I honestly never know what a song is going to become when I set out—it’s so cool when artists and producers have a vision from the start, but I’d say my writing process is quite emergent.

How have you been adjusting as an artist unable to tour and travel the way you were used to? Are you itching to get out and play your new music?

It’s been challenging, for sure. It was weird for me in a specific way, because I had literally just started to get into performing regularly around Vancouver and starting to plan tours when COVID-19 hit. So, unlike a lot of artists, I don’t even have a touring experience to miss yet—just a whole lot of anticipation and daydreams.

I want to play my whole record live with a kick-ass band to people everywhere. There’s nothing quite like the experience of performing for me, and I’ve lived with these songs so close to my chest for so long that it’s a bit maddening to still not be able to share them! But I’m also not interested in rushing the return to live shows until it’s safely backed by our scientific and medical communities, and I’ve been impressed with all of our independent venues locally working to adapt and see the other side of COVID-19.

I’m releasing one more single next month! It’s not a song off the album, though. It’s a Christmas song that I wrote.

There’s a string of big releases planned for early 2021 before the full album release. It’s funny—I kept feeling like this album was taking an eternity to finish and plan for, and I was constantly impatient. Then, suddenly, we were putting actual dates on the calendar in terms of releasing, and the realness of the whole thing hit me. I’m stupidly excited to put everything out, and also nervous (in a good way).