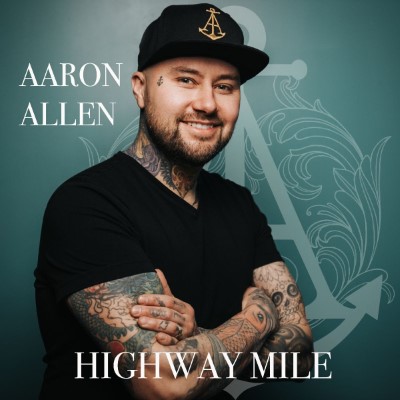 The title track from Allen’s latest release hit 200,000 streams in its first month and Canadian Beats was able to catch up with him to talk about his recent success.

Your new EP, Highway Mile, marks the 10th studio release of your career. What new elements did you bring to the table this time around? What was it like working with Jeff Dalziel?

A huge element brought to the table this time was having an open mind. In the past, I’ve been very close-minded as to what I Iistened to and what I derived inspiration from.  I was very critical about other genres and didn’t really explore things outside of my box.  Working with Jeff, he helped me to remove that wall to start seeing the good in genres I wouldn’t generally listen to and from there I naturally started writing better songs.  It expanded my songwriting education and gave me more inspiration to work with.  As well there were some great co-writers I worked with on this record.  I learned a lot from their process and perspective.  Jeff was the biggest missing piece of the puzzle for me to reach the next level in my career.  His mentorship really shifted the way I looked at everything musically.  He helped me realize the barriers I had built as an artist and how to get out of my own way.  Jeff really took the time to not only look at my back catalogue he took the time to figure out who I was as a person and an artist.  He cared about the music I loved and wanted to make.  He brought out the best in me and didn’t allow me to settle for anything less.  At the end of the day, it was just about producing music both him and I love for a lifetime.

The world of country music often sees artists being closely tied to their record labels. Could you speak to your experience working as an independent country artist? Has representing yourself helped set you apart from the crowd in any way?

Independently, it’s been a long 20-year trek but it’s made me who I am and I wouldn’t change that for the world. Without that learning experience, I’d be a different musician altogether.  It’s easy to see I don’t quite fit a certain mold and I sound a little different but that doesn’t scare me anymore.  I’m not interested in sounding like anyone else to sell records and I do feel that sets me apart from the crowd in some ways but I’m very comfortable there.  Have I struggled with that over the years?  I’d be lying if I said I didn’t.  But I’ve learned that I get to be a more authentic me.  If it holds me back in a monetary way well, that’s a risk I’m okay with.  I definitely think what my team and I have produced may be on the higher end of a risky investment based on the current climate but music is always a level of risk.  In the world of being independent, you are the investment.  You’re betting on yourself, so being you is all you got.  I can’t speak to the label side of things and how that is done as I haven’t been fully immersed in that world but what I can confidently say is that we did exactly what we set out to do and had no one to answer to but ourselves.  If I was on a label would the record sound the same?  Maybe not.

You also tattoo professionally on top of being a prolific country music artist. Could you speak to the relationship you have with these two creative outlets? For example, does one medium fuel any inspiration for the other?

Tattooing definitely inspired my single “Good Tattoo”. Tattooing gave me the idea to write a song about how love is permanent just like a tattoo.  As well, I’ve had clients come into my shop to get a tattoo and from our conversation a song was born.  It’s kind of cool how one has inspired the other from time to time.  I believe if you choose to live your life through art, you eat, sleep and breathe it.  Tattooing and music are not just jobs they make up part of who I am.  So, I guess naturally that comes out in any form of expression I do.

One of my biggest influences in the country world is Steve Earle. If he chose to record one of my songs I think I would finally have validation that I’m a good songwriter.  Until that day I’ll just keep trying to write a song as good as “Guitar Town”.  Even though he’s passed Tom Petty was one, if not the best songwriter this world has ever seen.  If there is anyone I would dream of writing a song for me it would be him.

All the places I’ve played over the years there is nothing more magical than playing Aeolian Hall here in London Ontario. It’s a small 300 seat theatre where when you perform you can hear a pin drop.  I once saw Hawksley Workmen unplug his guitar, push aside his microphone, stand on the end of the stage and belt a song out that easily traveled to the last row of the balcony.  I really love telling stories when I play so when you have a venue that is so conducive to that environment it has everyone listening and hanging on every word.  The energy travels through us all and there’s nothing like that feeling.  I will say playing last year’s Anthem Entertainment CCMA After Show in Calgary was right up there as well.  I got to sing the song “Faith” with my buddy, and co-writer on a couple of my songs, Phil Barton.  That was crazy fun.

I love the new Ingrid Andress album and I think everyone should check that out. I get huge inspiration from Donovan Woods and another great writer named Sean McConnell.  Sean McConnell’s 2016 self-titled release is on my list of one of the best records ever made.  One Acre of Land is a standout song for me.