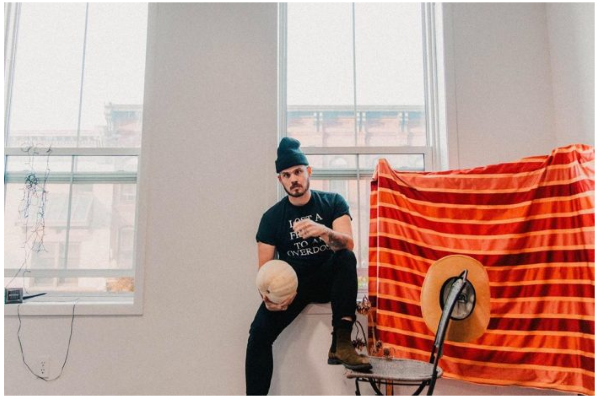 Ontario’s Michael C. Duguay has released a new tune with Owen Davies called “Sesame”. We caught up with him in our newest segment of Five Questions With, so take a few moments to check that out below, along with the new single!

I’m an artist, writer, and performer currently based in East-Central Ontario. In the mid to late ’00s, I worked as an accompanist and contributing member in a number of my friend’s great projects – The Burning Hell, Evening Hymns, Weird Lines – and released a few EP’s and records of my own. I left the Canadian music world from 2012-2018, dealing with some serious health and personal issues. In 2018, sober and healthy, I started performing again and recorded a new album of songs and song-sketches from that six-year period of instability. I called up a lot of old friends and new collaborators and worked out of a number of studios in Ontario. That record, ‘The Winter of our Discotheque’ will be released this summer on So Sorry Records.

My writing is personal and confessional; I have a difficult time writing about things that I myself have not experienced, about places I haven’t been, or people I haven’t met. I’d sooner write songs about Oshawa than Memphis.  Writing has served as a genuinely cathartic process for me recently – I experienced some pretty challenging adversity in my twenties, and writing has allowed me to make sense of it; like a sort of narrative therapy- and I think that shows in the work.  I’m interested in relaying a certain sort of specificity; I like to write about precise moments and subjects, and while I struggle to draw on vague or general themes, I like to get as close as I can to a subject and address it from every angle to the point where it becomes abstract – sort of like cubism in visual art, or how a word ceases to hold meaning when you repeat it again and again or zooming in really close to something with a magnifying glass to the point where it is no longer identifiable as part of its actual whole. Ambiguity, in general, but specifically in regards to songwriting, makes me anxious. I think that the ability to write songs that maintain ambiguity is a real gift that many folks have, but I do not. A lot of my songs end up being seven or more minutes long and, for now, I am a-ok with that.

Musically, I come from a background in the folk tradition. I grew up in Peterborough Ontario, playing a lot of bluegrass, honky-tonk and country-western music with folks like Washboard Hank and the Silver Hearts. I think that all of my songs begin as, or can be traced back to, country tunes, albeit shapeshift-y ones.  My arrangements lean towards maximalism; I like my work to be big, and dynamic. I think that draws on my experience playing punk music, and I hope that the emotional/political ethos of punk is never lost, or else I don’t know what I would be doing. I’m a card-carrying Deadhead, and I think that is reflected in my recordings as well. I’ve never quite known how to capture my work in the studio, so I bring in pals with lots of creative ideas and have fun with it.

At present, due to the COVID-19 Pandemic, all of my scheduled dates are on hold. Depending on how things pan out, I have an Ottawa to Saskatoon solo tour planned in late spring, followed by some Yukon dates. In August, I have a tentative East Coast tour booked, which will see me performing with a seven piece band. Right now I’m just patiently waiting for the world to arrive at its new normal, taking care of myself and my family, and hoping everybody remains safe and well.

My live performance takes a lot of shapes, and those shapes are often determined and shaped by the tastes and hands of my various collaborators. I treat my project like a collective which sees a lot of different musicians and artists passing through.    My solo performances, normally just me and a guitar, feature a lot of in-depth story telling and showcase my lyrical work – more like a poetry performance, supported by an instrument- and that serves as the foundation when I bring other performances into the mix. Last Autumn, I was collaborating and performing with folk and bluegrass musicians as a sort of string band. My most recent string of shows, and the shows booked this summer, feature a seven-piece band of jazz-trained musicians who all share an interest in improvisation and experimentation- and we can get really loud and freaky. Somebody described it as a post-rock jam band performing werido folk tunes, and I think that description fits nicely with the vision.

I would tell them to come see a show, but that’s not really the question. As far as what’s released and available right now, I would suggest ‘This City is a Grid’ – I think it serves as a good introduction to where the work sort of begins. I’ve got two records, an EP, and a remix collection coming out in the next year, though, so hold tight.

And a songwriter I seem to return to again and again is William Prince (Winnipeg). I heard him interviewed on the CBC last summer and became a fan before I even heard a note of music. The guy just speaks, writes, and sings so beautifully. I’d love to sit down and hang with him sometime.