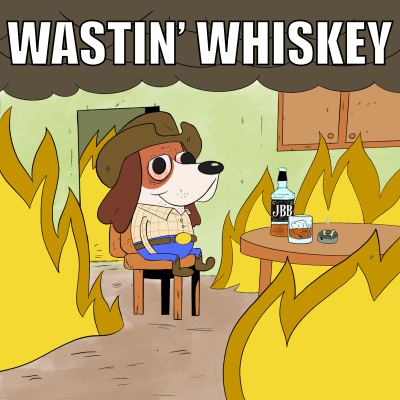 “Wastin’ Whiskey” hit the airwaves and everywhere else on March 25. It’s the follow-up to these PLATINUM-selling country stars James Barker Band’s (JBB) record-setting #1 last month “New Old Trucks” feat. Dirk Bentley. That tune cemented them as the Canadian country group with the most #1s in the BDS/Mediabase era. Finding viral success with “Wastin’ Whiskey” on TikTok earlier this year, this single is expected to quickly become a fan favourite.

This tune was written by James Barker, Jared Keim, and Travis Wood and it takes listeners back to the all-too-relatable agony of not being able to get over a broken heart, regardless of how many drinks you down. Driven by heartbreak-fuelled electric guitar licks and Barker’s smooth vocals, this tune impeccably captures the desperation of simply wanting to move on but having total failure to do just that. So, say the lyrics – This black label band-aid ain’t working like it supposed to / It ain’t no use till they start making something missing you proof / It don’t matter how much when I’m drinking ‘bout us / Baby I’m just wastin’ whiskey.

Barker jokes about the single and goes on to say,

“We’ve been blown away by the response to this new track and are happy to know that we’re not the only ones who have had a hard time getting over a breakup. We knew we had something special with this one when it came together in just a few hours –everything from the lyrics to production. Most of the vocals are the ones we laid down right then, that day.”

There was a teaser released on Tik Tok a while back. And, always leading with their fans-first mentality, “Wastin’ Whiskey” views quickly climbed to over one million and the response was loud and clear — the fans wanted more.

Barker says this about on the choice behind the new track and TikTok,

“We love getting feedback from our fans on new music. Over the past year, TikTok has allowed us to connect with them in a whole new way, giving them access to new tracks before we even know what we have. We’re excited to see how this track performs as our first fan-driven single.”

“Wastin’ Whiskey” is available for download and streaming HERE.

Catch JBB across Canada this spring on The Some Things Never Change Tour 2022
On another exciting note, the JBB four-piece made up of James Barker (lead vocals/guitar), Taylor Abram (guitar/background vocals), Connor Stephen (drums) and Bobby Martin (bass) will bring their rock-fueled live show on the road across Canada this spring on Dallas Smith’s The Some Things Never Change Tour 2022. With stops in 25 cities from coast to coast kicking off in May, fans can check out where to get tickets for the show closest to them at JamesBarkerBand.com.