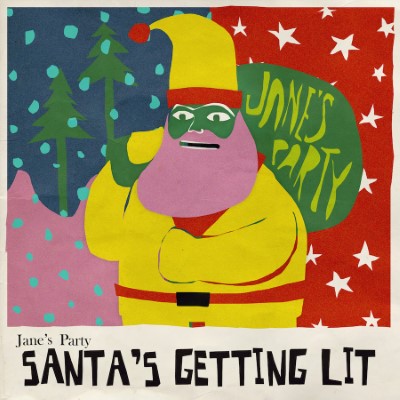 Toronto pop-rock quartet Jane’s Party has released “Santa’s Getting Lit”, an ode to how hard Santa works on Christmas Eve.

“Having delivered presents to all the kids in the world, Santa deserves some time to lay back and let loose. Hence, Santa’s lighting up the town on New Year’s Eve,” shares the band.

The original song was recorded at Pineship Sound in Toronto with Mike O’Brien and Carlin Nicholson of Zeus. It’s accompanied by a music video featuring Santa in Hollywood, Malibu, and Joshua Tree kicking his feet up and enjoying his time off.

“It’s always an unexpected treat for a song to arrive fully formed,” Tom Ionescu (guitar/vocals) explains. “‘Santa’s Getting Lit’ basically wrote itself as I tried to track down a rental car in a large parking lot on my way to a Christmas party. I figured if anyone could understand the slog of having to bear through holiday commitments, it’s ol’ St. Nick himself. I knew immediately what kind of sound it had to have; that timeless Chuck Berry meets Beach Boys flavour that only the best Christmas songs exude.” Jeff Giles (keys/guitar/vocals) adds ”When Tom sent around the demo, we all knew it was the Christmas song no one knew they were missing, but unmistakably needed this holiday season. Xmas always seems to have a Hallmark, family-oriented PG type of feel to it. ‘Santa’s Getting Lit’ finally shows a side of Santa we all know deep down is there, but no one wants to admit. Let’s just say the verses came easy and the vibe in the studio while recording was as loose as Mr. Kringle is going to be feeling by the morning of December 25th!”

Jane’s Party is currently at work with Zeus—who served as a big inspiration for the band coming up as musicians—to foil the pop-heavy production of 2019’s Casual Island, embracing a raw, “back-to-the-garage” approach that captures the essence of their notoriously tight tour-de-force of a live show. More information about Jane’s Party and the new album will be released in the coming months.