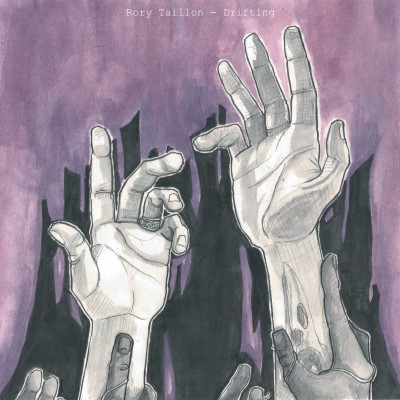 Drifting is the newest album from Ottawa based artist, Rory Taillon.

Drifting is like a dark back alley cafe, lit only by sparse candlelight and Taillon’s voice. The deep timbre of Tallion’s vocals echo off the smoke-filled room, resonating with your bones, urging you to connect with the music. Even if there are others in this imagined ‘cafe,’ Talliion builds a space just for him and the listener with minimalistic accompaniment that is only used to enforce the power of Taillon’s vocals. Instruments on Drifting include piano, percussion, upright bass, and electric bass, but the album most heavily leans on Tallion’s strumming acoustic guitar. So what does Tallion want to say once he has invited us into this rich space? It seems Talion does not want to waste our time with anything but the big stuff: existential themes of remorse, acknowledgment, mental health, depression, frustration with the status quo, loneliness, and love. Using mostly free form lyrics, almost stream of consciousness, Drifting provokes the listener to present and mindful while exploring these essential ideas with the artist in real-time.

Standout tracks to me were “Wonder” and “Wilful & Blind”. “Wonder” starts with Taillion’s voice, almost a whisper, with the rhythm of a lullaby. However, this track is not for children as much as it is to lay the dead to rest. Tallion almost seems to be musing next to a passed loved one as he remarks in refrain; “I wonder if it’s like going to sleep… after a well-spent life.” There’s no more apt description for this track than ‘haunting.’ “Wilful & Blind” has an excellent sense of drama to it that almost put me in the mind of a gothic epic. With a constant, ominous chime throughout, Tallion’s voice takes on the effect of a gregorian chant, raising to emotional wails as the lyrics muse on the inevitability of death — and the human tendency to be willful and blind to these facts. There are other ‘lighter’ tracks on the album, but these two tracks really connected with me in this particular dark time.