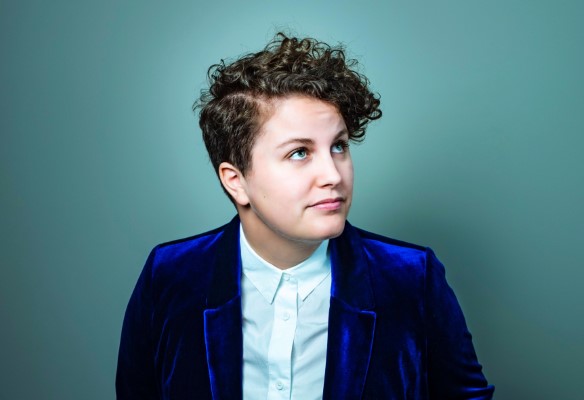 The Newfoundland songstress released the song in 2018 as part of her debut album Benefit of the Doubt. The album featured 10 wonderfully-crafted songs that touched on love, nostalgia, heartbreak, and consciousness.

Now Loder is debuting the music video for “Molded Like A Monster” – reflecting the captivating message surrounding the song itself which asks what our world would look like if love consistently overpowered hate.

We caught up with Kellie Loder to talk about her journey from her debut until now, the importance of making this video, and the exciting new projects she has cooking.

It’s been a couple of years now since you released your debut album, Benefit of the Doubt. It’s been great to see first-hand how people have received you and your music. What have these last two years meant to you?

Over the last two years, I’ve experienced some serious growth as an artist and as a person. It was amazing to see the album do so well, but I worked hard for sure. It was nice to see it get some recognition at the Canadian Folk Music Awards as well as the Music NL Awards. It’s an album I’m proud of when I listen to it, and it’s opened up so many doors for me to perform, including being able to tour the US for the first time this past summer.

There is a vulnerability that’s woven into all of your songs, which translates into this authenticity and stirring emotion. What was your journey like as a storyteller in the years before you made your first album? Growing up and writing songs, were you always so open and willing to share your story? Or did it take time to find who you were going to be as an artist?

I come from a family of storytellers. My dad and my brother are actually much better at telling stories in my opinion, and I feel like they’re funnier. For whatever reason, when I’m on stage, this whole other level of whit comes out, and sometimes I even surprise myself. I was always open to sharing my songs while growing up and I always wanted people to listen, but there was so much joy in writing the songs themselves, and there still is. I remember if life was ever heavier than normal on a given day, I’d escape to my room with my blue guitar and write songs. I’d record them on one of those skinny twenty dollar computer mics, and I still have some of the recordings today. I feel it’s always taken time to figure out who I was going to be as an artist, and that hasn’t changed. I, like everyone, am always evolving but I like to believe my spirit is consistent. I like to believe I have a sound.

Before we talk about the video, take us back to when you originally wrote the song. The message has continued to be so relevant and powerful in the world we live in. What was the story behind crafting this song?

I wrote this song after seeing the movie “American Sniper”, the true story of Chris Kyle. If you haven’t seen the film, it’s about an American soldier/sniper who is deported to Iraq (starring Bradley Cooper). There’s a scene in the film in which an Iraqi boy (probably 8 years old or younger) comes out of one of the buildings and he picks up a rocket launcher and points it at the American Troops. Meanwhile, the sniper is watching everything happen and is begging the little boy underneath his breath to drop the gun, otherwise, he knows he’ll have to take the little boy’s life. This scene shook me to my very core and it got me thinking that we don’t really choose the mold we’re born into, the family we come home to (if any family at all), or to hear the things we’re told and rewarded to believe. We all have the ability to be someone else’s monster through our judgment and discrimination, but we all have a heart that beats, we all want to be loved, and we are more the same than different. I wrote it in the car via my voice notes when I was driving on the highway and I finished it at my parent’s place in Badger, Newfoundland just a few days later. I actually wrote the chorus in the bathtub.

The video for Molded Like A Monster really does speak volumes. What was the conversation like between you and your team when you decided you were going to make a video to accompany the song?

For the longest time, I struggled to find the right idea for this video. A couple of years ago I was applying for a grant to make the music video and the company I had partnered with hired someone to write the storyline for the video. Sadly, we were unsuccessful in getting the grant. Sometime after that, I was successful in getting a grant from FACTOR. Therefore, I went looking for the writer of the storyline to explain that I now had the funds to make the video. I found out her name was www.ashleawessel.com and I then discovered she was also a director. I hired her and her term to make the video. It seemed pretty fitting.

I want to touch on your upcoming projects because you released a new song during Quarantine called “Afterglow.” Tell us about the process behind this song, and how it ties into the next project you’re planning.

“Afterglow” was sort of an impulse song. My roommate/producer Daniel Adams and I were getting pretty cabin-feverish while in quarantine and we decided to start recording some demos of songs we had written. While in the middle of recording “Afterglow” he looked at me and said “Wanna release this?” and I said, “Why not?” At this point, I’m taking things just one single at a time and we plan to release another song for the summer.

You must be itching to get back out on the road and play live shows. Are there any special venues that you hope to return to?

I really do miss it. I was pretty bummed when all the festivals I was booked for this summer got canceled, including the Mariposa Folk Festival and Calgary Stampede, so it’ll be nice if the same line-ups get booked for next year. I was also really looking forward to opening Joel Plaskett’s tour this past May. Hopefully, it gets rescheduled and I can have that experience.