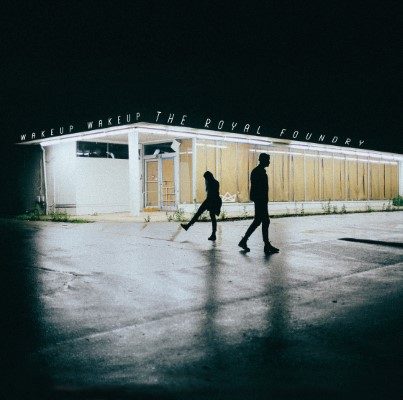 WAKEUP WAKEUP is the newest album from Edmonton based band, The Royal Foundry.

Overall, WAKEUP WAKEUP is irresistibly joyful and lively – a veritable playground of energy. Using primarily lead male vocals, female backing, synths, samples, and electric guitar, the album lives up to its namesake as WAKEUP WAKEUP seems laser-focused on WAKING YOU UP – but also putting a smile on your face while it does it.

Standout tracks for me on the album were “I Need Ya”, “10”, and “Skin is Thicker.” In the track “I Need Ya,” the lead singer builds a funky melody on top of the pulsing synths beats to plead their case of how desperate their love is. On top of the base layer of vocals, though, “I Need Ya” is punctuated by brief samples of an assortment of other instruments, including piano, bass, and even a full angelic choir (with harp) as if the singer is calling on everything they have musically to plead their intention.

The track ‘”10” starts slow and sadly as the lyrics describe the loss of a lover, undercut by a slow sad beat – but 30 seconds into the song, the track suddenly kicks into an almost tango like beat with a cacophony of lively horns, guitar, and synths. This switch is striking, but effective, in communicating the song’s message. The singer may have been hurt by a loss, but every time they feel lost or hurt, they can count to ten and remember there’s still time to start again and enjoy a vibrant life – a great message for any listener who is in pain.

The track “Skin is Thicker” is the only song on WAKEUP WAKEUP where the female vocalist of the Royal Foundry takes lead vocals. Starting with simple piano chords and the singer’s hushed vocals, the song builds on this simple foundation with violins, guitar, drums and so on till the song explodes with sounds, finally tapering off with just the singer and piano. This accumulation and denouement of sounds take the listener on a journey as the lyrics detail the singer facing adversity but feeling no fear as their “skin is thicker” and they will survive any challenge un-scarred.