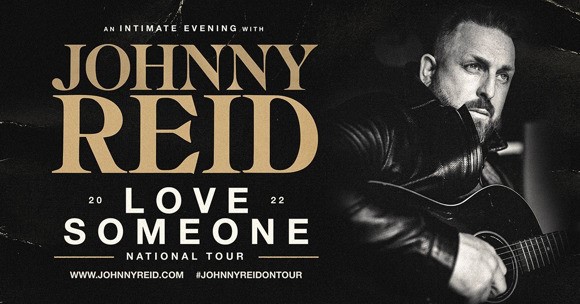 Multi-Platinum, JUNO Award-winning singer-songwriter Johnny Reid has announced his 2022 Love Someone tour will kick off on February 10 in London, Ontario, and is set to be one of the longest-running artist tours in Canadian history with over one hundred shows once all tour dates are announced! Reid is making it his mission to connect directly with fans across the country with his tour that boasts a stripped-down set with stops in smaller communities that rarely get to see an artist of Reid’s caliber during a national tour.

The tour falls on the heels of the release of Reid’s 11th studio album, Love Someone, which was released on October 15 via Universal Music Canada. On this 14-track album, Reid returns to his country roots and marks his most intimate and inspired collection of songs to date. Complementing the album’s inherent intimacy, the tour will give fans a rare chance to hear Reid live in a highly up close and personal setting as opposed to the major market venues and colossal crowds he typically draws.

Reid shares his thoughts about this tour,

“The pandemic has taught me a lot about the value of time. I’ve given a lot of thought about how and where I want to spend my time. I’m really excited to bring this tour to as many places as possible. I can’t wait to reconnect with all of the people that have supported me all of these years in a more intimate concert experience.”

Information about ticket sales can be found HERE.