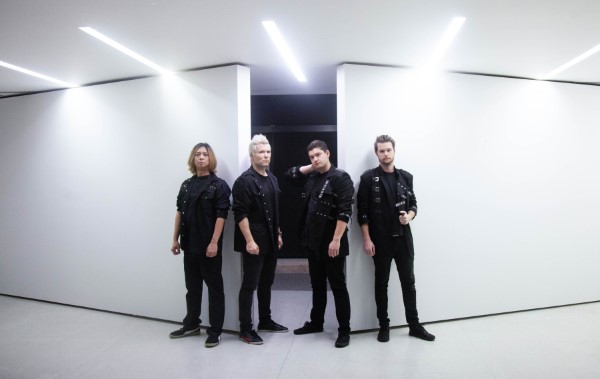 Vancouver, BC-based band, OurGlassZoo are set to release their sophomore album in early 2020, following up their debut EP which was released back in 2017.

They have unveiled the lead single, “Astronaut”, along with a video for the release. The electro-rock track matches the futuristic video perfectly, check it out below and find out more about OurGlassZoo via our Five Questions With segment.

Hey everyone, we’re OurGlassZoo, an electro-rock group out of Vancouver, Canada. You could also consider us “cinematic rock”, which we interpret to mean music that evokes powerful imagery and we strive to create music that does exactly that. Our concept is that we are all citizens of a “glass zoo” where people are limited by metaphorical walls put around them by society and their own thoughts. The band members are freedom fighters against those powers of oppression. And in between all those serious concepts, we’re just a fun bunch of guys who really love music.

Our music has elements of a variety of genres since we all have fairly diverse inspirations. After you listen to it, you’ll likely agree that it contains homages to pop, new wave, electronic and alternative Rock. We all love the energy that is inherent in rock music so we try to bring that energy as much as possible.

When we write, we start with an organic jam or a riff one of us comes up with. We then play with it for a bit, pause to talk about it, and start forming the emotional progression of the music. Once the music is solidified, Josias (vocals) will pitch an idea to the group about the song’s meaning. Garrett (guitar), Ramon (drums), and Carmine (bass) will then provide their own thoughts for Josias to include in the lyrical content. Once the song is “written”, we collaborate with producers to enhance the sounds to give it that unique feel which includes the electronic ingredients.

Yes! We’re very excited to be playing an EP release show at The Roxy Cabaret (Vancouver) on April 25th, and then an “Astronaut” music video release show at the Fox Cabaret (Vancouver) on May 23rd. If you come to our live shows you should expect to be given a group of committed entertainers. We really enjoy engaging our crowd while we play. We look at our shoes enough when we’re not on stage so we don’t need to do it while we’re performing ;). We always plan a setlist that will keep our audience engaged. You can clearly see and hear how much we love playing live as we do not try to hide the thrill of a show. We’ve also brought other musicians in to perform with us because we want to ensure our fans are entertained and want to prove ourselves to potential new fans.

Josias (vocals):  ‘Sins’ is a very special song to me personally. It features a string quartet, a choir, and deals with a subject matter that is close to my heart.

Garett (guitar): It’s like saying who is your favourite child. 🙂 One hour 17 minutes later… my suggestion will be “Shallow Streets”

Carmine (bass): I personally really like “Another Way” because it starts sounding dark but ends up with an anthemic joyous conclusion. I think I would have to say “Astronaut” though, since it is our latest song and it captures our energy well.

Josias (vocals):  I love fellow Vancouver bands Mother Mother, the Zolas and XL the band. I am also a fan of Metric, Dragonette, Thee Weekend, Half Moon Run and Dallas Green as well. As far as lyricists, Raine Maida from Our Lady Peace was always a big inspiration to me.

Garret (Guitar): Recently I have been influenced by the Zolas, Wide Mouth Mason and Mother Mother. But in terms of songwriting, Ryan Guldemond is a big influence. Shaun Verreault phenomenal’s slide playing is heaven to me. Kevin Breit, when doing his own show can be super inspirational because he dares to do ‘strange things’ with his fuzz pedal, very often thinking out of the box.

Carmine (bass):  Lately I’ve been listening to more homegrown classic metal. The groups Skull Fist (Toronto) and Striker (Edmonton) are really great. A local (to Vancouver) group I would love to hear more from is Magik Spells. They are a little bit like us in that they defy genre. Their “Elements” album has a super cool sound.

Ramon (drums): Death from above, We are the City, The Zolas, Live in Color, Metric, and Half Moon Run.