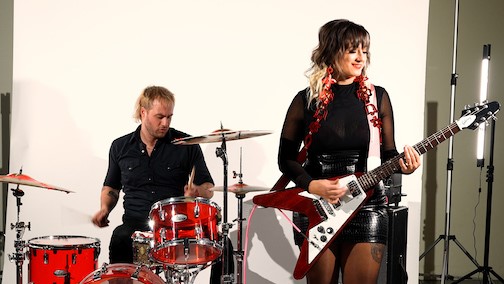 Calgary, AB-based guitar-and-drums garage rock duo, Miesha and the Spanks is made up of front woman-guitarist Miesha Loui and drummer Sean Hamilton. The two released a video for their new single, “Mixed Blood Girls”. Directed by  Alex Manitopyes and Angel Aubichon from Indi City, the video describes Miesha’s experience as a mixed-Secwépemc girl in her small hometown in BC.

“We released our song Mixed Blood Girls on March 26, 2021,” recounts Miesha. “It was the last single to be released ahead of our Singles EP, and describes my experience as a mixed-Secwépemc girl growing up in the East Kootenays and as a young woman once I move to the city. I talk about my broken family, my privilege, my feelings of displacement, but ultimately am proudly anthemic with my M-m-m-mixed Blood Girls…”

“I didn’t “come out” as NDN on this track, I’ve always been,” says Miesha. “But I’ve never used my platform as an artist to talk about my disjointed connection with my Indigenous identity. It was hard to be so vulnerable, but I was inspired, and it was something I needed to do. I heard Rain Prudhomme read her poem Mixedblood Girls one evening, when I attended my hometown friend Smokii Sumac’s book launch here in Calgary. She was sharing her mixed experience so openly and it was beautiful and I related and I was drawn to it immediately.”

Miesha continues, “On my way home, Mixed Blood Girls circled over and over in my head and I decided I would share mine as well. Other mixed blood girls heard the song, related, and reached out – including Alex Manitopyes and Angel Aubichon from Indi City – the creators of my favourite earrings, and filmmakers in their own right. They’ve worked with Drezus, Mama Rudegyal, and I had really really hoped we would connect on this.”

“The first time I heard ‘Mixed Blood Girls’ I immediately started dancing around, excited that there was finally an anthem to proclaim out loud and proud,” says Indi City’s Angel Aubichon. “As a not completely white-passing girl but also not obviously Indigenous I found myself on the quest for belonging by not ever really belonging. Miesha writes about the remarks people made to her and about her as a young girl that contributed to a disconnect from her identity and belonging. I totally resonate with that. That was my life growing up in small-town Northern Saskatchewan. “Mixed Blood Girls” brought it into perspective that there are others out there who share similar stories of reclamation, healing, and pride in our own being-ness.”

Alex and Angel successfully applied for funding from Calgary Arts Development under the Original Peoples’ Investment Program to make a cinematic music video for Mixed Blood Girls. This program supports the preservation and revitalization of First Nations, Métis, and Inuit (FNMI) art through art-based projects that are supported and validated by FNMI artists, community, Elders, and Knowledge Keepers. They wanted to include Miesha, her “younger self” (played by Aria Faith Merasty), a performance aspect, the poem that started everything, and more mixed blood girls.

Says Angel, “I conceptualised the many faces of the ‘Mixed Blood Girls’ aspect of the video to reflect this. Folks need to see the various faces of Indigeneity.”

Watch the video for “Mixed Blood Girls” below, and stay up to date with Miesha and the Spanks via their socials.