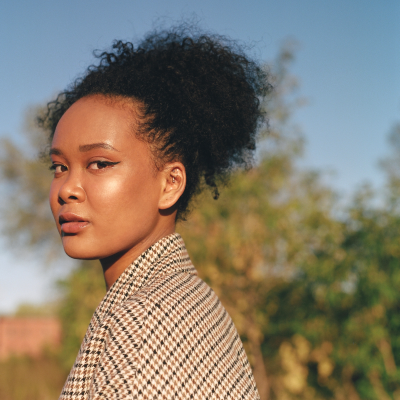 Tamara teamed up with her dream duo to see “Autumn Tears” through to its final product. The song was produced by Dominique Messier (Céline Dion) and mastered by Marc Thériault who boasts an impressive portfolio of working with top musical talent including Céline Dion, Charlotte Cardin, Sia, and Eric Clapton.

The single is a musical representation of the advice Tamara wishes she could have told her younger self and an encouraging reminder to learn from the past and persevere.

“Autumn Tears” touches upon a toxic relationship Tamara was involved in several years ago. She was coming out of a dark place, a time when she was going through enormous waves due to her mental health and was with an unsupportive partner. She decided to go in-depth about how the relationship affected them both overall, but specifically towards its end. And as much as one can blame the other, the reality was they were both at fault. Throughout the song, Tamara circles around topics such as ‘problem drinking’; manipulation; depression; anxiety and self-blame. Tamara wrote “Autumn Tears” towards the end of Autumn, a few weeks following an encounter with her ex years after they went their separate ways. Although writing the song in months due to having to revisit awful memories, Tamara has said that writing “Autumn Tears” has helped her cope, learn, heal and grow.”

Check out the single below, and find out more about Tamara via our Five Questions With segment.

Sure! My name is Tamara Grace, I’m a 21-year-old singer/songwriter and musician, and I’m from Montréal, Québec. My admiration for music started pretty early on! I was surrounded by my parents, grandmother, aunt, and two uncles, who each had very different music tastes. From Country to Classical, to Pop and Metal… everything was played in our house, and I was quickly able to catch on that music could be interpreted and approached in more ways than one. I remember having my first taste in songwriting when I was 8. I was bullied a lot back then and would write my feelings down in my diary rather than talk about them. And those heavy feelings in a page of paper then turned into lyrics I would add to my melodies. And yeah, I’ve been in and out of studios since I was 15 and have been loving every single moment of the ride!

I wrote “Autumn Tears” about a toxic relationship I was in a couple of years back. The relationship itself was like walking on eggshells. We remained together, even though we both knew we were horrible for one another because we were two lonely birds in need of companionship. After our breakup, we hadn’t heard from or seen one another in years. So, seeing him for the first time since then, it made different emotions resurface: sadness, anger, confusion, shock… and being an overthinker, my brain kept on pressing the replay button on that scenario. One night, I was on my piano playing what is now the song’s melody on and on, and the entire first verse came out of the blue. I solely wrote and composed “Autumn Tears”, just like with all of my tracks. But with this one, I got the pleasure to work alongside recording engineer and musician Dominique Messier, who produced the track! He is an absolute genius and working with him was such a cool experience! I’m just… insanely proud of this track and how it turned out, truly!

Great question! I think like many creatives out there, I’ve been a lot more active on social media, especially since the pandemic hit. I think due to the fact that in-person interactions were near to impossible, social media was the ‘next big thing’. So definitely having an active presence in the ‘internet world’ for sure!

Canadian Beats is all about Canadian music, so if you were able to work with one fellow Canadian artist, alive or dead, who would you choose?

Oh… there are so many to choose from! We have such talented artists here in Canada, so that’s definitely tricky! However, an artist I would love to collaborate with someday is Bülow. I adore her music and I’m just in complete awe of her vocals! I remember first hearing “Two Punks In Love” and “Sweet Little Lies” on the radio a few years ago, and I was sucked in right away. I feel that our voices could blend so well, as we both have soft voices that are evenly dark and sweet. So, an opportunity to work with Bülow would be a dream!

I do have a couple of goals for this year… like all creatives out there, I hope to grow as an artist: career-wise and mental-wise. I also am looking forward to collaborating with more artists this year. Since the start of 2022, I have met several upcoming artists and I’m just excited about working with new faces, always! And also, gigging for sure! I can still remember my last performance, however, it’s a little fuzzy. It was right before the global pandemic had hit! So, performing in front of a live crowd again… ah, I just can’t wait!