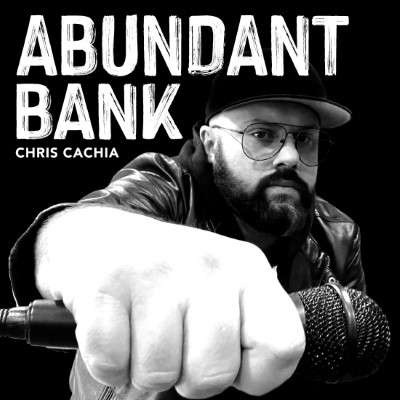 Chris is a music-maker and word-shaper who draws inspiration from the golden age of hip-hop that would focus on lyricism. Often addressing social issues through his storytelling, Cachia aims to call upon the power, and pleasure, that language has when in the right hands.

Cachia jumps right into his newest LP with a boom-bap track. Fueled by the fire embedded in Cachia’s flow and wordsmithing, “Abundant Bank” goes hard. Mixing personal struggles and triumphs into the fire creates a startling yet inviting aura that can only be found crowding around a roaring bonfire.

No stranger to the theory that “art is pain,” Cachia uses his music to convey an uplifting message to his growing fan base.

“Creativity can be used as means to address mental health concerns and issues of social injustice. Good art often comes from difficult places,” he says.

What’s good? My name’s Chris Cachia and I’m an independent Hip Hop artist. Hip Hop’s been a big part of my life for as long as I can remember, ever since I got a Fat Boys tape when I was about 7 years old and started writing, rhyming, and recording on my father’s tape deck just after that. I know this is off-topic, but the Fat Boys don’t get their due. Everyone thinks of them as a novelty act, but they were produced by Kurtis Blow, and it doesn’t get much more classic than “The Breaks.” As you can probably tell, I’m a bit of a nerd when it comes to Hip Hop history. Besides making music, I’m into a lot of other forms of art. And besides being creative, I’m proud to be a husband and father and son and brother and friend. I have the best family, including two beautiful and smart daughters who take after their mother. Oh, and I’m a teacher and incorporate Hip Hop into a lot of my work as an educator.

What kickstarted the idea to write “Abundant Bank”?

Well, “Abundant Bank” is the first track on my latest album, Persona. Really, the whole of the project is about the many different performances we give and roles we all play in the various aspects of our lives. Who is the realest me? The realest you? These kinds of questions about identity have interested me for a long time, but especially when I was going through a serious mental health challenge a few years ago. Looking back, being diagnosed with OCD, which I had probably dealt with all my life, was a real disruption to my own identity and how I thought of myself. I’m fortunate, though. I have a lot of support, especially from my wife and girls, and it was that challenge that prompted me to get back into music after a long hiatus. I found myself thinking a lot about identity in a new way during the pandemic, a time when we were all wearing masks. All of this, all of these ideas and experiences, were the impetus for this album in which I take on different personas, but they’re all me. “Abundant Bank” starts the story. It’s about the bandit, the outlaw, the loner, who will do whatever is necessary to provide for himself and his family.

What do you love about being in Halton Hills?

I lived downtown in Toronto for many years, but we moved for my wife’s work. I like that I can still get downtown fairly easily, but also that we live in a place with access to a lot of trails and a community that is becoming more and more diverse. Home is wherever my family is.

Who was the first MC to knock you sideways?

KRS-One. My top 5 changes all the time, but I think KRS is my GOAT. To me, he’s the prototype of a real emcee. His story is almost mythical, and yet he always speaks the truth. His voice is raw. His stage presence is enormous. His rhyme styles are unique and versatile. He can freestyle, tell a story, and just straight-up rhyme. There have been a lot of really good Verzuz battles, I think of the Erykah Badu and Jill Scott lovefest, DJ Premier and RZA going record for record, Beenie Man and Bounty Killer clashing for king of the dancehall, but, for my money, the KRS and Big Daddy Kane battle was quintessential Hip Hop. Plus, like all of the great philosophers before him, and like Nas and all of the great emcees that came after him, KRS’ whole being is contradictory.

Wow, that’s tough. I immediately think of all the great Hip Hop acts, from Kardinal Offishall to Haviah Mighty. Still, I have to go with Neil Young. He’s a legend who’s always shown integrity in both his music and activism. I’m sure a lot of people feel this way, but I’m always drawn to those who are most authentic. That’s also why I’m a fan of Mustafa, Fefe Dobson, Alessia Cara, and a host of others. No matter the age or genre or anything else, real people make real music, and that will always resonate.