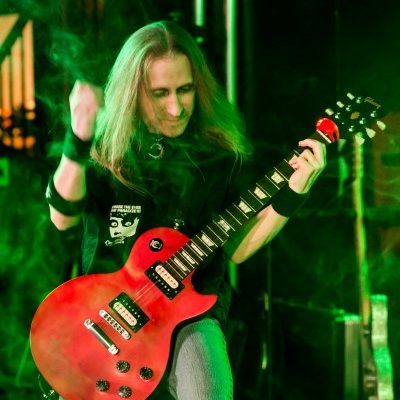 Ottawa and Toronto-based musician and songwriter, Darren Michael Boyd has recently released a video for “The Earth is B Flat”.

“Darren is a rock star…there’s no doubt about that. He’s got the look, the attitude, and the chops to pull it all off. I’m really excited about this album! Boyd blends the theatrics of bands like KISS, Alice Cooper and Queen with technical playing and melodies around every corner, with a modern twist to the sound. This is definitely not a ‘throwback’ record. Guitar fans are gonna flip!”

Check out “The Earth is B Flat” below and find out more about Darren in our Five Questions With segment.

Certainly! My name is Darren Michael Boyd. I’m a songwriter and guitarist from Ottawa, and I recently released my debut solo instrumental album called Lifting the Curse.

I classify it as Instrumental Witch Rock. It’s guitar-driven rock music with a connection to nature and the invisible world. I approached writing my instrumental album the same way as I write for vocal songs. It’s always all about the song. Even though I’m primarily a guitar player, it’s not a shred-fest at all. (Not that there’s anything wrong with that!)

I have no live dates on the calendar – YET! When I was recording the album I really didn’t expect much opportunity or demand for it to be performed live. Apparently, I was wrong – This happens occasionally! I have some musician pals I’m working with to solidify a killer show, and can’t wait to bring this insanity to the stage. I am working on a tight, theatrical show, so it will be worth the wait to get the performance and stage show just right.

Probably Circle of Sixes, because it’s so guitar-driven and raw. The production is straightforward, even the video is simple. I feel new listeners will like the energetic rock vibe and also be able to tell I’m having fun and not taking myself too seriously.

I could make this a long list because Canada has so much wicked talent! Here are some I think are extraordinary: