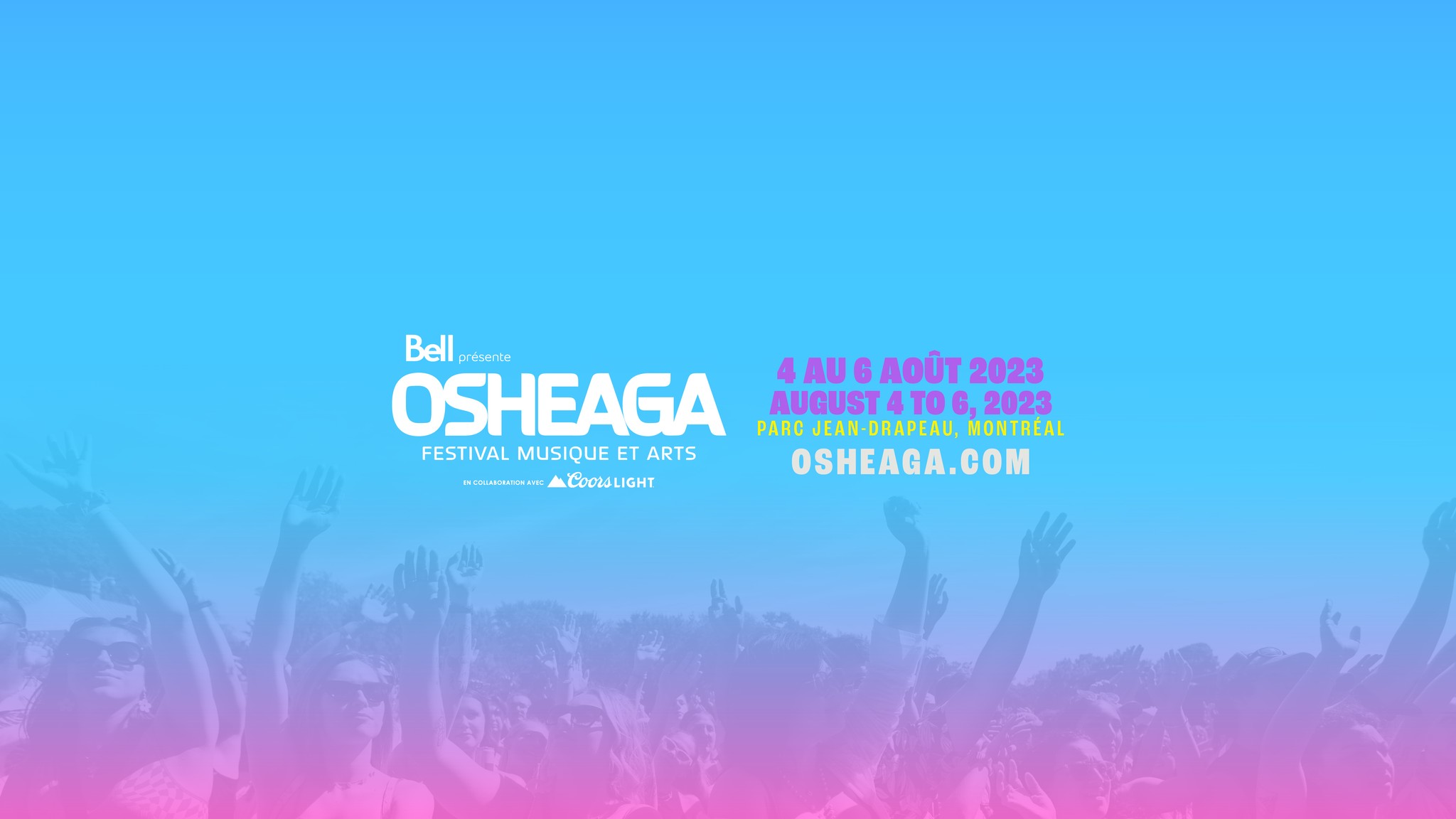 The 16th edition of the OSHEAGA Music and Arts Festival presented by Bell in collaboration with Coors Light is set to be a massive celebration with some of the top performers in music. From August 4 to 6, Montreal’s Parc Jean-Drapeau on Île Sainte-Hélène will be the epicentre of live music bliss, as the headliners of Canada’s favourite music festival take the stage on a gorgeous island located in the middle of the mighty St. Lawrence River for 3 days of excitement, discovery and delight! 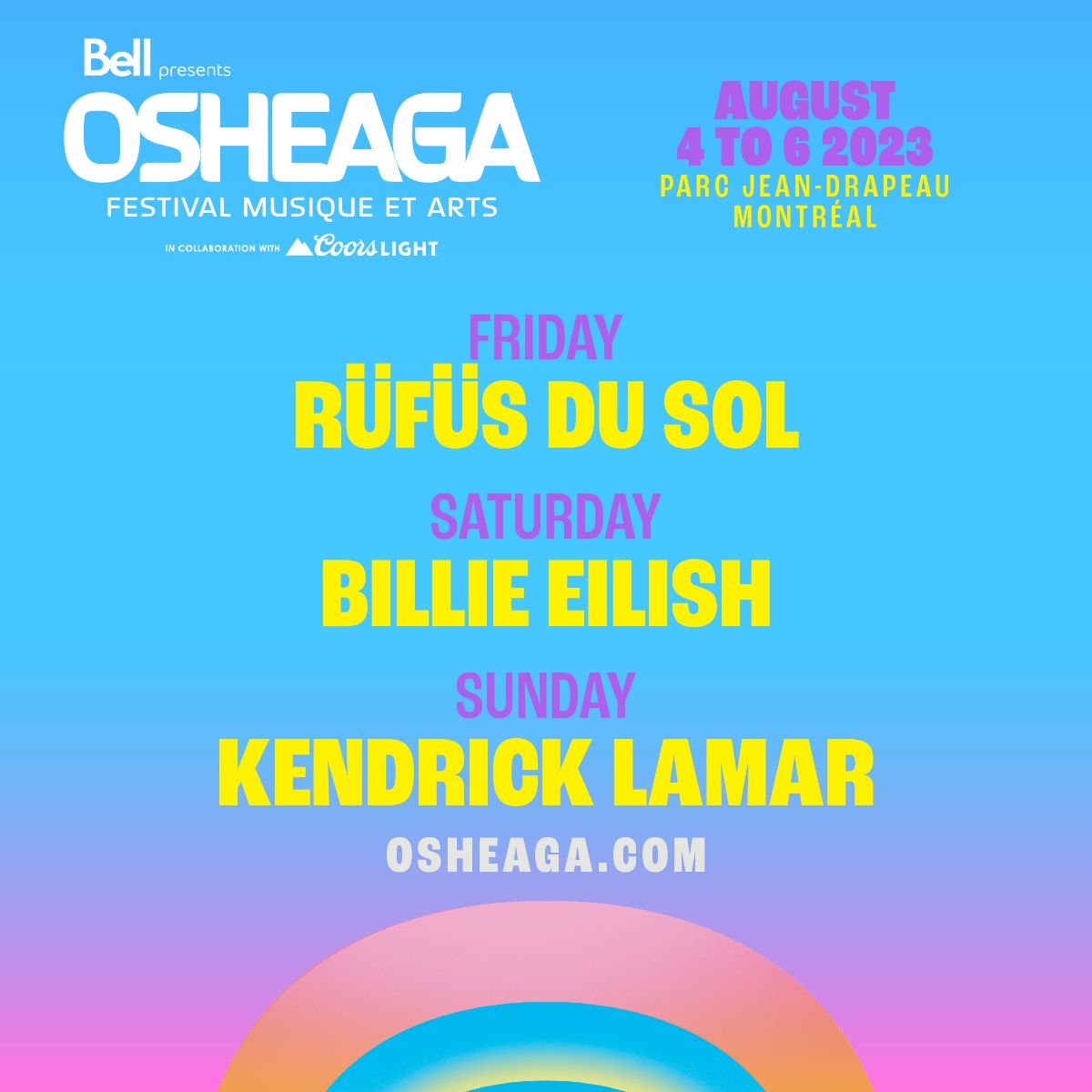 RÜFÜS DU SOL are no strangers to Montreal, having built a deep and meaningful relationship with fans in this city over the years – notably in 2019, when their set on OSHEAGA’s Green Stage was one of the most talked-about performances of the entire festival. This Australian group is known for their incredibly rich live show, which is lush with sonic layers, over-the-top trippy visuals, and undeniable underlying big beats. The trio absolutely blew audiences away with their concerts in Montreal and Toronto this past summer, and they are nominated for two Grammys at next year’s ceremony: Best Dance/Electronic Recording (for their single “On My Knees”) and Best Dance/Electronic Music Album (for last year’s “Surrender”). Anyone who hasn’t seen them before should make it an absolute priority this summer, and those that know, know. We’ll see you there on Friday!Billie Eilish returns to OSHEAGA after a breakthrough performance at the Valley Stage in 2018 that was a total revelation for everyone in attendance.  She has one of  those rare voices that can literally stop people in their tracks, regardless of age or generation. She is timeless and yet completely of the moment, and OSHEAGA has been supporting her since the early days, when she performed as a newcomer at the fest in 2018. Since then, Billie’s arresting vocals, intimate lyrics, and forward-leaning sonic production have made her one of the most popular and enigmatic artists of her generation; she’s the youngest performer in history to have won the top four Grammy Awards (Best New Artist, Song of the Year, Record of the Year, and Album of the Year in 2020). She also left a huge impact on Montreal when she sold out the Corona Theatre in 2018 and Place Bell in June 2019. Fans eagerly await her next visit to our city… and she will finally return this summer to totally enrapture her legion of admirers on Saturday night.Having headlined the festival in 2015 to an adoring crowd, in what is largely considered one of the most amazing headline sets OSHEAGA has ever seen, hip-hop legend Kendrick Lamar is known worldwide as one of the most brilliant rappers of all time. Possessing razor-sharp lyrical prowess, and an acrobatic ability to deliver them with spitfire precision, he stuns audiences every time he performs, either solo or backed by his super tight band of musicians. The rap god was recently honoured with 8 nominations for the 2023 Grammy Awards for his critically acclaimed album, Mr. Morale and the Big Steppers, and he will certainly blow fans away when he hits the stage to close out the festival on Sunday!

” 15 years into this journey we have been fortunate to have some of the greatest acts in the world grace our stages. I feel that this year’s headliners continue in that tradition and represent what our festival is all about: Amazing live performances! We are excited to see RÜFÜS DU SOL and Billie Eilish graduate to the main stages after their excellent performances in 2019 and 2018, and we anxiously await the return of Kendrick Lamar whose 2015 set is definitely in the running for one of the best OSHEAGA hardline sets ever. Long live Live Music, we hope you enjoy this year as much as we will. “

Needless to say, this edition will be one for the books, and you don’t want to miss out! Tickets go on sale Friday, December 16th at 6am ET, and American Express card members can get Front Of The Line® presale tickets starting today at 10am ET. General admission 3-day tickets start at $375 CAD but hurry up, 3-day tickets are on sale at the 2022 price for a limited quantity! For tickets and more info, visit OSHEAGA.com.