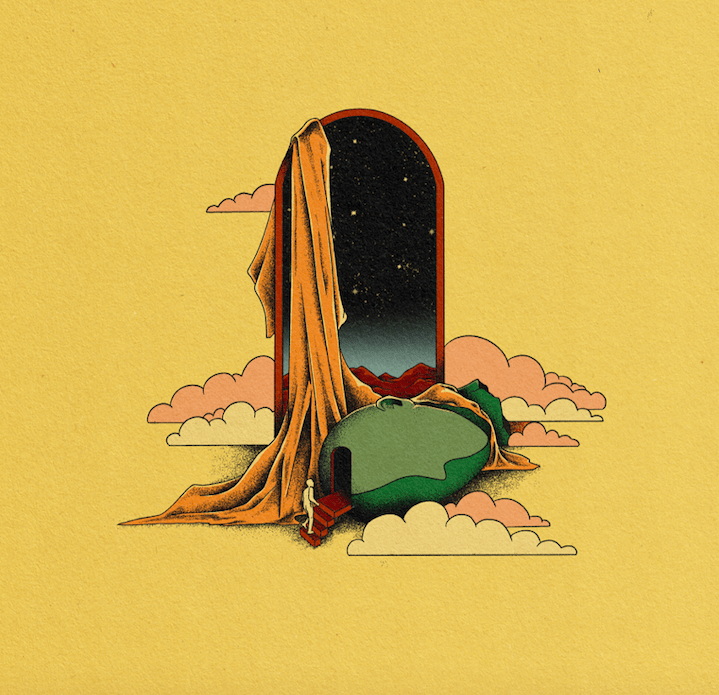 Ten Minute Detour, the Alberta-raised, Ontario-based four-piece, unveiled their latest album Golden Tapestry on September 16, 2022, which is their first album in four years.

The twelve-song release starts with a brief, chaotic intro, which leads into “Midnight Kid.” Starting off with strong Americana vibes, the track is an excellent introduction to the album; as the band states on this release, they “explored American and folk roots, while still remaining true to their indie-rock sound.” As the song plays on, the band merges that Americana sound with an indie-rock feel. The chorus of “Midnight Kid” quickly burrows into your brain, and you’ll find yourself singing along.

“Got It Down” possesses a cheerful beat and captivating vocals. It’s easy to see that Ten Minute Detour does not stay put in one specific genre, which shows that they are multi-talented and are going nowhere but up. When I heard the chorus, “Honey you got it down, With every move and every sound, Oh I can’t believe that you ran into me, Honey you got it down,” I immediately felt as though it expresses encouragement and found it to be quite morale-boosting.

“What Can I Do?” features unhurried vocals and a light indie-rock vibe. During the chorus, “What can I do? To find my way home again, Back to you, Make me feel whole again,” the vocals switch from easygoing to melodious and captivating. As with many of the tracks on this release, the track addresses issues that much of the population deals with, in this case, feeling insecure and possibly lacking self-worth.

Next up is “Morningbird,” which was the first single released earlier this year and amassed over 34,000 plays on Spotify. The track begins much as the last, but once we reach the chorus, the beat intensifies. The vocals strengthen, belting out, “Frozen, On the water, I’m a soldier, Of the sea, Riding, I’m capsizing, I’m indebted, To this dream, Ain’t no ever after on the beach, Ain’t no better laughter singing.” It’s not hard to see why this track was chosen as a single and is a stand-out for me.

At the halfway mark, “On We Go” bursts in with a strong, persistent beat. The vocal effects throughout the track and the soulful stylings add another dimension to the band’s expertise.

The title track, “Golden Tapestry,” shows yet another side of the band, with intense vocals and a fast-paced beat. It’s one of those songs that doesn’t allow you to sit still. The lyrics, “I’ll just hover in the shadows as I slowly unwind into, Threads of my past, Each memory a feeling different colour different cloth, Cut me loose, set me free, I’m ready to be born again I’m ready to be me,” caught my attention straight away. Add in the chorus, “And I’m reminded of a beautiful memory, And I unwind it ’till it makes me cry…,” and I feel like this song is much deeper than it may seem. We’ll each have our own interpretations, but for me, these lyrics speak of being someone you’re not because you’re afraid to be yourself, but you want more than nothing else, to just be yourself. My message to anyone who feels that way is, just do it, be you.

As we reach “Calibrate,” we know that Ten Minute Detour can do anything they put their mind to. As the beat rises and falls with the lyrics, the listener is transported into the track. The vocals on this track have an almost hypnotic, calming feel to them.

Coming in at track ten, “In A Lifetime” is a song that will surely speak to the masses and is definitely a stand-out in my books. With lyrics, “How many times must we stand in line, Missing out on what money can’t buy, How many nights must we spend alone, Eyes on the screen of a telephone,” is a question that we should all be asking ourselves. I am certainly guilty of being absolutely addicted to my phone, and I am willing to bet most of you are the same. I would highly recommend everyone listen to this track. Just sit back, and ponder the lyrics, which are 100% relatable.

“Garden Party” brings a crisp and clean beat, combined with lyrics expressing wanting to please someone, and doing everything you can for that person, to make them want you back. Now, that’s something we’ve all felt, am I right?

Closing out the release, “City At Night” is a beautiful indie-rock track with a strong Americana influence. The light and airy vocals, combined with the thought-provoking lyrics, create the perfect conclusion to a release that is nothing short of breathtaking.

As a whole, this is one of those albums that you can’t go wrong with. The songs will appeal to fans of various genres and relate to listeners of any age.