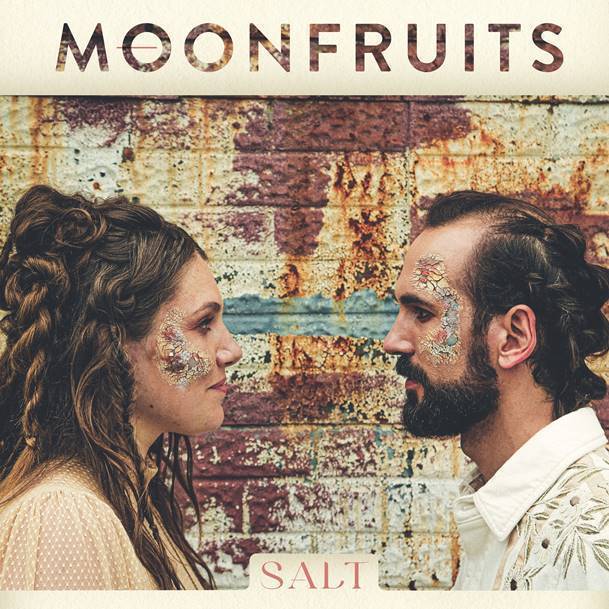 When it comes to Ottawa’s Moonfruits, vocal harmonies are undeniably the highlight. That’s not to negate the music, which features wonderful banjo, guitar, violin, and then some. But there is something just so lovely about the way that the voices of partners Alex Millair and Katlin Milroy come together, as they so regularly do on their newest album, Salt.

Either singer is impressive on their own, as shown when one or the other takes the lead, like with the Millair-only baritone of “Time Past Time” and mezzo Milroy-centric “Moon Cradle.” More often, however, there is a back and forth between the singers that constantly find their sounds uniting, which is always a pleasure. The tone and pace are, for the most part, light, at times even delicate, but some songs are comparatively animated. “Renter’s Ramble” even gets downright rowdy at times, in a stomp-the-floorboards-to-the-rhythm kind of way.

Listening to the lyrics, the concept of connection repeatedly comes to mind, not just between the musicians themselves but in a much larger sense as well. “Atoms of the Apartment,” for instance, considers the very nature of human existence. At the same time, “Seven Billion” reminds us of the value of looking out for one another with its repeated refrain of “We all do well when we all do well.” That kind of consideration for the appreciable aspects of life resonates throughout the album.

In some ways, listening to Moonfruits’ Salt feels like sitting in on a couple’s private conversation. At the same time, it’s as though they are welcoming the world to join in conviviality together. It all has the sensation of being intimate yet also inviting. Count me in for that.