The Discarded share their new single, “Thoughts and Prayers” (Interview) 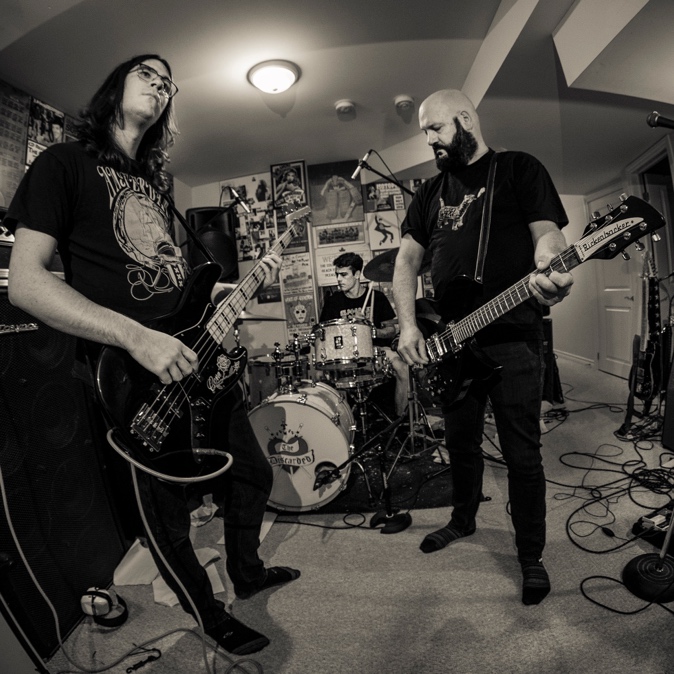 The Discarded Send “Thoughts and Prayers” in Provocative New Single

The human cost of political inaction on gun violence and the meaningless “Thoughts and Prayers” from leaders that follow inevitable tragedy is the subject of Orangeville, Ontario-based rock band The Discarded and their provocative new single.

Inspired by the heavy toll and senselessness of gun violence across North America and the family unit within the band, The Discarded’s latest song, “Thoughts and Prayers,” accompanies a collection of exquisitely constructed tracks on the highly anticipated new album and soundtrack to the upcoming animated feature film, “The Getgoes.” The new record was produced, engineered, and mixed by JUNO award-winner and founder/owner of Green Door Studios, John Critchley.

“Thoughts and Prayers” was initially conceived by veteran rocker and guitarist/vocalist for The Discarded, J.P Wasson, after the shooting at the Parkland high school rocked the community. The song calls out politicians who have chosen not to use their power to keep communities safe and instead offer thoughts and prayers in the wake of catastrophe.

As Wasson says, “Sadly, the relevance of the song has not diminished since that time nor the use of the platitude.” Emotions run high on “Thoughts and Prayers” as Wasson plays alongside his two sons, who began playing and honing their craft at the ages of 13-and 17-years-old.

“There is a unique family bond between us that transcends into the unspoken communication and creation of our music.”

Wasson explains that they intuitively pick up on one another’s playing to form a sound that is more than the sum of its parts. Caden Jax Wasson provides the earth-shattering percussion for The Discarded, and his brother Jared Dean Wasson nourishes the band’s grooviness on bass.

While the song came together over a couple of weeks, the band’s family dynamic is what drove home the messaging in the lyrics. The vocals on the track are further enhanced with an appearance by singer/songwriter Carmen Toth. “Thoughts and Prayers” is a complex symmetry of intricate rock melodies and a visceral social commentary that pulls no punches.

Chaperoning the forthcoming album is the official music video for “Thoughts and Prayers.” The animated video introduces audiences to Peter Guindon’s psychedelic art style and The Discarded’s sound. The unique audio/visual fusion forms the basis for the upcoming full-length feature film, “The Getgoes,” which will be released later this year.

Watch the video for “Thoughts and Prayers” below, and learn more about The Discarded via our mini-interview.

Hi, we’re The Discarded from Orangeville, Ontario, a small town just north of Toronto, Canada. We are comprised of drummer Caden Jax Wasson, his brother Jared Dean Wasson on bass, and father, veteran rocker J.P. (Joel) Wasson on guitar and vocals. Throughout the 90s, JP played in such seminal bands as Fifth Column (drums) and Snowdogs (drums and lead vocals). The two brothers started playing in the band when they were just 13 and 17 years old. The ensuing years, countless rehearsals, and live shows have seen the band develop into a tight hard, rocking unit that thrives on the creation of original, creative, well-crafted music.

Since their formation in 2016, The Discarded has recorded and released four albums and one EP, with an already completed fifth full-length album and film slated for release in December 2022. They’ve played close to 100 live shows, several southern Ontario tours, and have opened for The Sonics at Toronto’s Danforth Music Hall and Teenage Head at Hamilton’s This Ain’t Hollywood. They’ve also supported Lowest of the Low on their 2018 tour and opened for Rusty’s 2019 album release. Their albums have received airplay on college and online radio.

The Discarded’s first three albums and EP were produced, engineered, and mixed by Ian Blurton (Change of Heart, Future Now), at his Pro Gold Studio. Those albums are 2017’s self-titled debut, “The Discarded,” 2018’s “Manifesto,” and their EP “Not From This Town” and 2019’s “Sound Check and Fury.” Their latest album, “The Getgoes and their single Thoughts and prayers, “was produced, engineered, and mixed by Juno winner John Critchley at his Green Door Studio. Critchley also mixed 2021’s “Live Pandemic Sessions,” recorded live off the floor at Sessions on The River in Fort Erie, which was released with an accompanying video. All albums were mastered by Grammy-nominee Joao Carvelho, with artwork/photography by Rick McGinnis and design by illustrator Racheal Muir.

What’s it like being in a band from Orangeville/Toronto?

Orangeville is where I sleep (J.P.), but I spent my formative musical year in Toronto and is where we typically play our local shows and we hear many of my lifelong friends live. Orangeville’s okay, but not much of a music scene for bands like us to play. Jared moved to Ottawa during the pandemic and now lives there, and Caden is off at Laurier for university and only summers in Orangeville now. So, to answer your question- very low-key to be a band from Orangeville.

How did you go from being frustrated by the gun issue to creating a song about it?

I’ve never been a fan of the mass shootings of children and the inaction and lame platitudes after each instance. I wrote the song after the Parkland shooting in 2019, seeing the same BS and refrains of “thoughts and prayers and” and “what can be done,” so I wrote the words. Jared came up with a cool riff during a rehearsal, and I applied the words to that riff, and we solidified the song very quickly. It’s kind of cool that it was all written together as a band in the basement outside of the words.

The Beatles. That hasn’t changed much. Caden and Jared have their own journey of favorite bands. Of course, The Beatles (forced upon them by their dad- ha!) and Green Day when they were younger. But Jared is into Sabbath, The Who, the bass playing of Geddy Lee and Rush, as well as Cliff Burton of Metallica has informed his sound. Caden is into Led Zepplin (John Bonham) and has gone down the Deep Purple rabbit hole of late. I know sort of classic rock for a band whose music is punk garage rock-influenced, but our sound has morphed a bit since they were thirteen and seventeen when we started out. I’m a big Ramones fan as well, and you could describe our sound as if The Ramones had Bonham and Entwisle as the rhythm section.

Well, us, of course- ha! We typically say Locomotive 8, or how about a Sloan album or Skye Wallace!!

Related ItemsEric Alper PRfeaturedInterviewontarioOntario MusicOrangeville ONThe DiscardedThe GetgoesThoughts and Prayers
← Previous Story Pressa shares on his recent time in LA, being back home and more (Interview)
Next Story → The Mendozaz – Five Questions With