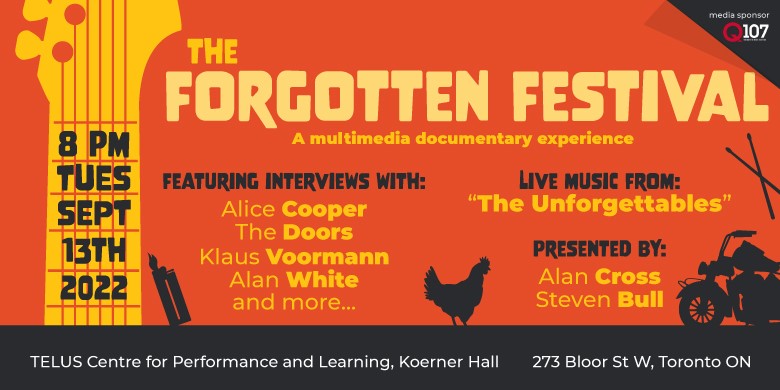 It Ended The Beatles, Put Shock Into Rock, And Revolutionized Concert Culture: See The Film And Discussion About All Of It.

You’re forgiven if you’ve never heard of the 1969 Toronto Rock and Roll Revival. After all, this 12-hour concert—in true Canadian tradition—has long been called the Forgotten Festival. And yet so much of the history of modern music was written that day in front of 20,000 spellbound fans at the original Varsity Stadium in downtown Toronto.

It’s where John Lennon launched the Plastic Ono Band live, only days before seeing the end of the Beatles. It’s where 20-year-old Alan White got his start as Lennon’s last-minute drummer, years before joining Yes and earning his place in the Rock Hall of Fame. Also, Alice Cooper and “the chicken incident?” That happened here, too. And it’s where that whole business of flicking a lighter during a concert got its start. Culture is about stories: so many were told about this event.

“So how in the world has nobody done a documentary about this?”

That’s what award-winning broadcaster Steven J. Bull asked himself. Now see the film about that incredible event, including his journey on how this documentary got made, guided by “three wise men” who were there for the show back in 1969.

Get your tickets for this exclusive event:

Steven J. Bull presents THE FORGOTTEN FESTIVAL, with Alan Cross (storytelling) and music by The Unforgettables.

This documentary screening is a one-night-only engagement on September 13, 2022, at Toronto’s Koerner Hall (273 Bloor St. W).

Learn more about the event here.