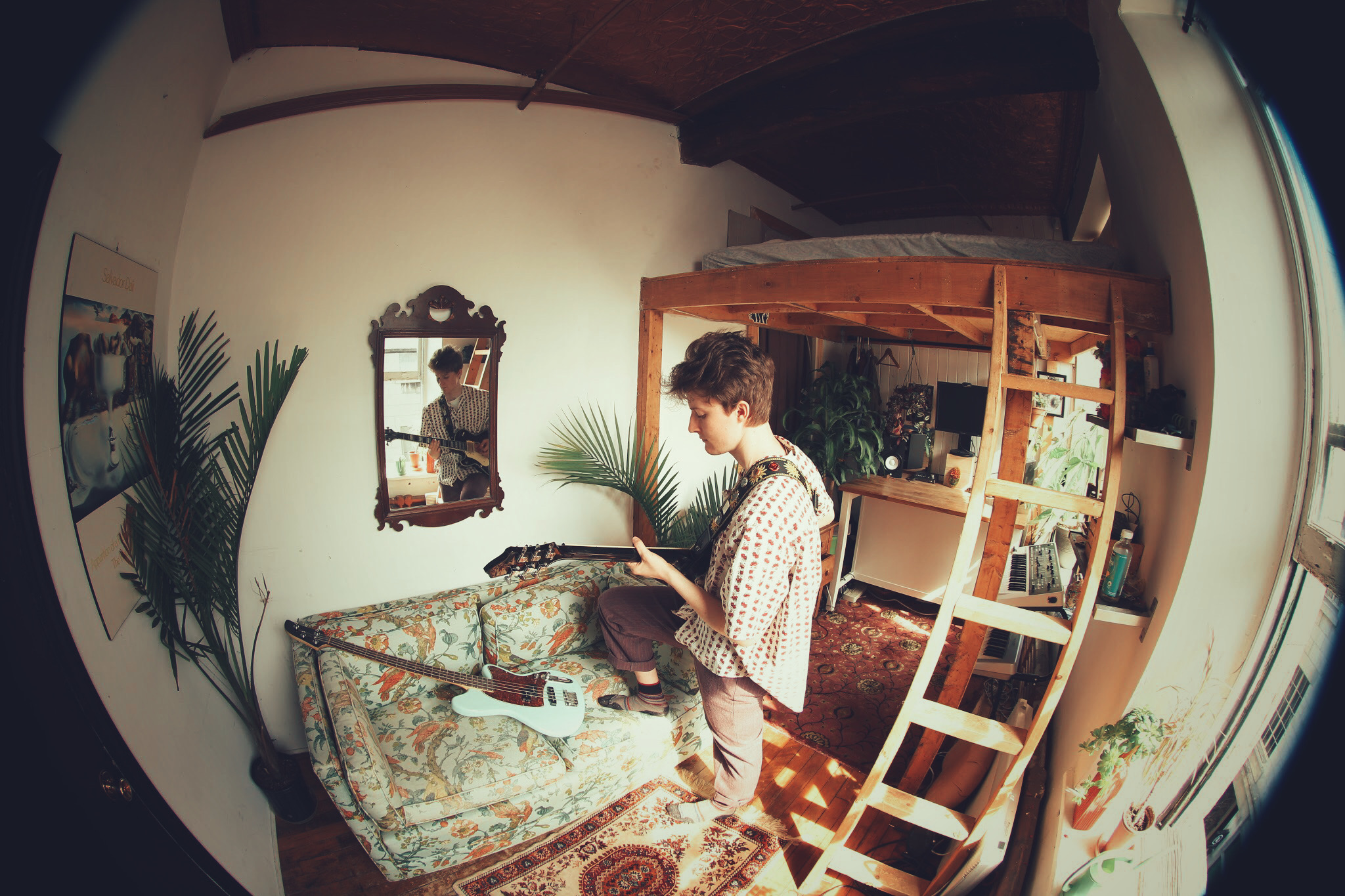 While dreaming of summer, Nicholas made the song in his bedroom studio in Montreal this past winter. The neo-soul track pulls you into a calming lull with blooming guitar melodies and soothing vocals complimented by lush harmonies. It has the perfect vibe for a coffee shop, park hangs, or relaxing just about anywhere. “Kaleidoscope” depicts a couple helping each other find joy in simple pleasures and feeling at home sharing a moment together.

“I wanted to portray the feeling of how another’s presence can open up new perspectives and possibilities of experiencing the world;” shares Nicholas. “The verses are filled with imagery that pulls you into this new found comforting world, while the refrain contrasts an expressed worry that we’re wishing our days away. Kaleidoscope is a perfect moment between two lovers holding this feeling of not wanting to waste their lives elsewhere.”

“Kaleidoscope” is accompanied by an official visualizer featuring Gilles Brière.

“For this song, I thought it would be fun to shoot something that was focusing on the listener’s experience, and when I made the song I visualized a simple scene, smoking in a park.

We met Gilles (the actor) and he had so much character we thought it might be funny and cool to just have the video one long shot of him smoking this joint, vibing out to the song.

Our goal with the video is to catch people off guard a bit and disarm them with an almost psychedelic feeling. Can we get people feeling like they’re mid-trip when they’re tuned in? This is something I’m looking to explore more with my music and visuals going forward;” shares Nicholas.

Watch the official visualizer for “Kaleidoscope” below, and find out more about Nicholas Cangiano via our Five Questions With segment.

My name is Nicholas Cangiano. I’m a solo musician based out of Montreal, QC, making neo-soul and funk-inspired pop music. I’ve been writing, recording, and producing my music for about seven years now, and I’ve been a street performer in Montreal for four years, live looping in the squares and streets of the old port.

Kaleidoscope is the third and final single from my new project entitled ‘New Occasion.’ It’s a collection of music that I wrote in late 2021 and early 2022. I had a big writing period during that time, but funny enough most of the songs on the EP were written within the span of about five days. Kaleidoscope was one of them.

I find that happens a lot in my creative process. I’ll hit a stride, and a lot of my best music will come out all at once. I wrote the instrumentals first, and the vocals came very naturally afterward. Kaleidoscope is about a couple helping each other find the beauty in simple things, and for me, it really just puts me right in the place it depicts, laying in nature, feeling like time is standing still.

I tend to be inspired most when I try not to force anything, my best music comes to me when I kind of get my ego out of the way and let the energy I’m in come out in the way it wants to. I like writing from the perspective of feeling and the things that I feel when I’m most present, like embracing the impermanence of life and the value in simple things, but try not to take things too seriously and convey ideas in a way that feels good and loose.

Musically I’m inspired by the likes of Tom Misch, Chet Faker, & Remi Wolf, but also Montreal contemporaries like Kaytranada, HOMESHAKE, Magi Merlin, & Busty and the Bass. I like to pull from many styles and think of my music as a blend of classic funk and neo-soul with a touch of modern pop and rock.

I’m locked in on playing a private release party on my rooftop for my EP release in October, and I’m also doing a showcase with the Favourite Library team (Edwin Raphael and other Montreal artists). A couple more shows are in the works, so hopefully, a North East Canada Tour soon!

My goal is always just to keep making the music that feels good to me, and wherever that takes me, I’m happy to go.