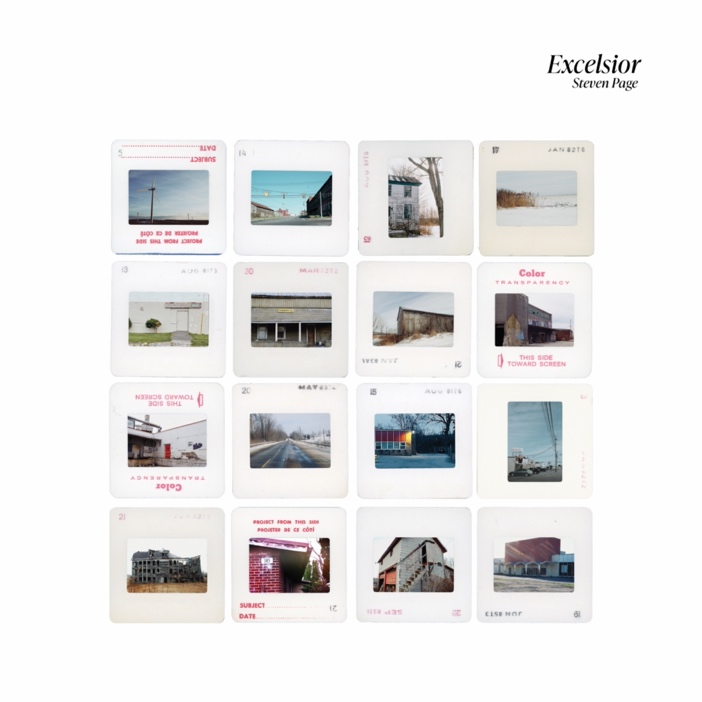 On September 30, Steven Page will release Excelsior digitally; it’s his first solo album since 2018. The album on Page’s Fresh Baked Goods imprint will be available on CD on November 11, with a 2-LP vinyl version out early in 2023. Pre-save the album on Apple Music.

The album’s 11 tracks were composed and produced entirely by Page, who co-founded the band Barenaked Ladies before departing on a solo career in 2009.

The lion’s share of material on Excelsior was “workshopped” for audiences on his wildly popular virtual concert series Live From Home, which Page has been conducting via Zoom since April of 2020 from his home near Syracuse, NY. Thousands of fans throughout the world have been tuning in on Saturdays (5 PM Eastern, 2 PM Pacific, 10 PM/UK, 7 AM Sunday – Australia-Eastern), which are limited to 1000 ticketed audience members per show, with an estimated to-date paid viewer total of 85,000+. The more than 90 episodes of Live From Home are available through Patreon.

The Excelsior track titled “Zoom” is, in fact, the album’s first single and is out now.

While Page played most of the instruments heard on Excelsior, other musicians participating include Craig Northey (guitar, vocals) and Kevin Fox (cello, vocals), members of the Steven Page Trio, his touring ensemble who are well known to Live From Home viewers for their ability to accompany Page from remote locations. Also heard on Excelsior are Doug Elliott of the Odds (bass), as well as Joe Pisapia (pedal steel), who had been a member of Guster and has both backed and produced k.d. lang. Steven’s brother Matthew Page guests on drums.

Once the Canada-US border re-opened, Page was able to complete Excelsior at his Fresh Baked Woods (FBW) studio in Blackstock, Ontario, with some of the basic tracks recorded in the Upstate New York basement from which Live From Home originates most Saturdays. FBW is the same facility where several Barenaked Ladies albums, including Barenaked For The Holidays, were recorded.

Seven of the 11 tracks comprise a thematically linked song cycle that Page characterizes as “a suite of songs tied into what we’ve been involved with over the last ten years.” These will occupy sides A and B of the 2 LP version of Excelsior when it is released next year, along with the unrelated additional four songs (“gifts with purchase,” Steven jokes) to be found on side C of the second LP.

Side D will be silent and occupied by an etched graphic. “So you have two buckets of songs, so to speak. One speaks to an ‘outer life’ — bigger picture stuff. The others are largely about our very online existence and isolation we’ve all experience. It’s about all of us who spend too much time online.”

The songs on sides A and B are, in some way, an overview of humanity’s plight as reflected in the struggles of the individual.

“I don’t want to make it totally prescriptive as in ‘this is how you should hear it,’ but you might want it to apply it to your own lives if you feel so moved.”

The album’s title, taken from the state motto of New York, relates to a Canadian living there and unable to go back to his native land for more than a year and half to see his parents or kids.

Page, who was born in Scarborough, Ontario, and inducted into the Canadian Music Hall of Fame explains,

“I was kind of stuck here (Manlius, NY) and, in essence, became a true New Yorker. The state’s vaccine passports are called Excelsior Passes, and we reflect the slogan’s ‘onward and upward’ meaning in the album’s artwork.”

Beyond Live From Home and the new album, Page was commissioned to write “Canada Loves You Back” on the occasion of Ryan Reynolds being given the nation’s 2021 Governor General’s Performing Arts Award. In a Tweet seen by almost 4 million, Reynolds referred to Page as “a friend and a legend” and thanked him “for wasting this amazing song on me.”  See Ryan Reynold’s tweet and hear the track here.

This fall, the Steven Page Trio open select North American dates for The Who.

“We’re not using drums on the Who dates; we can’t compete with them so the best thing you can do in that situation is to do the thing you do well.”

He points out that “The Who was the first band — that wasn’t the Beatles — that I fell in love with.”

The Steven Page Trio is additionally doing Midwest tour dates and expects to be on the West Coast in January in support of Excelsior.