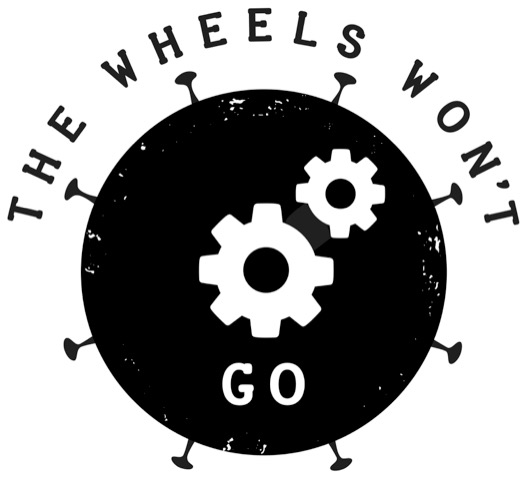 Singer-Songwriter, Square Dance Caller, and Early Childhood Musician Hannah Shira Naiman has a new single coming out on September 2 from her upcoming third full-length album out on October 7, 2022.

The readers at Canadian Beats are lucky, though. You all have exclusive early access!

Hannah wrote the swampy, driving, old-time song “The Wheels Won’t Go” in the winter of 2020, and it recalls fear and denial of the COVID-19 pandemic’s early stages just around the time that her gigs started to disappear.

It was a dark time for many of us. One by one, concerts and dances were canceled as COVID-19 spread. Hannah Shira Naiman recalls feeling hopeful that the spread of the virus would remain contained in countries and communities far from her. Then came the paralyzing fear that accompanied the realization that no community was immune. For Hannah, much of the album was actually written before the pandemic hit, while taking care of her daughter, and as part of a creation residency funded by the Ontario Arts Council. But “The Wheels Won’t Go” speaks to the hard times we’ve endured, and perhaps in part due to the pandemic, Hannah has written and recorded some of her best work to date.

“The Wheels Won’t Go” starts with only hambone and then ban jo, plucking out a melody to a lyric were both sound as old as the hills and as timeless as dirt. The song builds in intensity and instrumentation, adding an electric guitar (Ken Whiteley, who also produced the album) and full percussion (Gary Craig), but never abandons the darkness or simplicity of its ancient old-time feel. Hannah’s original songwriting continues to honour traditional music, referencing African American hambone rhythms and gospel song structure.

In her video, Hannah takes the spotlight as not only the singer and banjo player but as the dancer as well – a nod to her previous career as a contemporary dancer and choreographer. She studied contemporary dance at Concordia University in Montreal and performed and produced work in Boston, MA, before returning to Toronto in 2008. Hannah’s choreographies focused on the fusion of contemporary dance with English/American traditions such as contra, sword, and morris dance. After sustaining an injury in 2010, she shifted her focus toward music and square dancing.

“This video project is a culmination of all of the vulnerable parts of me. It is my truest and fullest self-expression.”

Watch the video for “The Wheels Won’t Go” below, and find out more about Hannah Shira Naiman via our mini-interview.

My name is Hannah Shira Naiman, I am a songwriter, dancer, and square dance caller based in Huntsville, Ontario. I also work with young children in French and English, teaching early music appreciation and traditional dance.

I was raised in a family of traditional musicians, and I have always been drawn to the very edges of what is “traditional” vs. “contemporary.” Before I was recording music, I was pursuing a career as a contemporary dance choreographer- and even then, I was interested in finding ways to draw out and isolate interesting elements of traditional dance and present them in a modern light.

I live with my partner and kid and a big hound dog named Jimmy Stewart at the edge of a very rugged forest- we fall asleep to owls hooting, and it’s simply the best.

You have unveiled your new single, “The Wheels Won’t Go.” What can you tell us about the writing process behind the track?

I wrote “The Wheels Won’t Go” during the early stages of the pandemic during the first lockdown. I had been at home with my family for several consecutive days, watching my gigs crumble and fall away and feeling the growing dread of this impending pandemic. I, like many, had been holding out hope that the virus would stay out of my community, but as time went on, the reality became clear.

The song follows a traditional gospel form of “mother, father, sister, brother,”- wherein each family member bears the exact same warning. The song format felt like an appropriate way for me to communicate the repetitive nature of news updates at the time and the denial that many of us faced as the virus circled closer and closer to home.

Ken Whiteley’s production of the track highlights my use of hambone- an African American rhythmic technique, and layers less traditional sounds (drum kit and electric guitar) over clawhammer banjo and upright bass.

The single is pulled from your upcoming 3rd full-length album. What can you tell us about the release?

The songs on my upcoming album draw from my experience of motherhood, my move to rural Ontario, my struggle to find a community, the covid pandemic, some beauty, some love, and lots of hard dark grit underneath. I’m excited about this album- it represents a new aesthetic (there are some beautiful horn arrangements by William Carn) and a kind of vulnerability I haven’t allowed for in previous albums.

What is your favourite thing about the music scene in Toronto (and Northern Ontario)?

I moved out of Toronto in 2017, and I miss the traditional music community there every day. I am lucky to have made great friendships and connections in the English and Oldtime communities. They are more than a collection of musicians with similar interests, they are a village, an extended chosen family, and it is pure joy to share music with them.

As for Northern Ontario- I haven’t really had a chance to meet the community here, and I’m looking forward to doing that now that the world is opening up again.

I was geared to rejoin the music scene in 2019 after taking a break to have my kid, and the pandemic knocked the wind right out of my sails. With the release of this album, I’m working to rebuild- I’m hoping to book a few tours in Northern and Southeastern Ontario/Quebec and Northeastern US this year and hop back into the festival circuit in the summer.