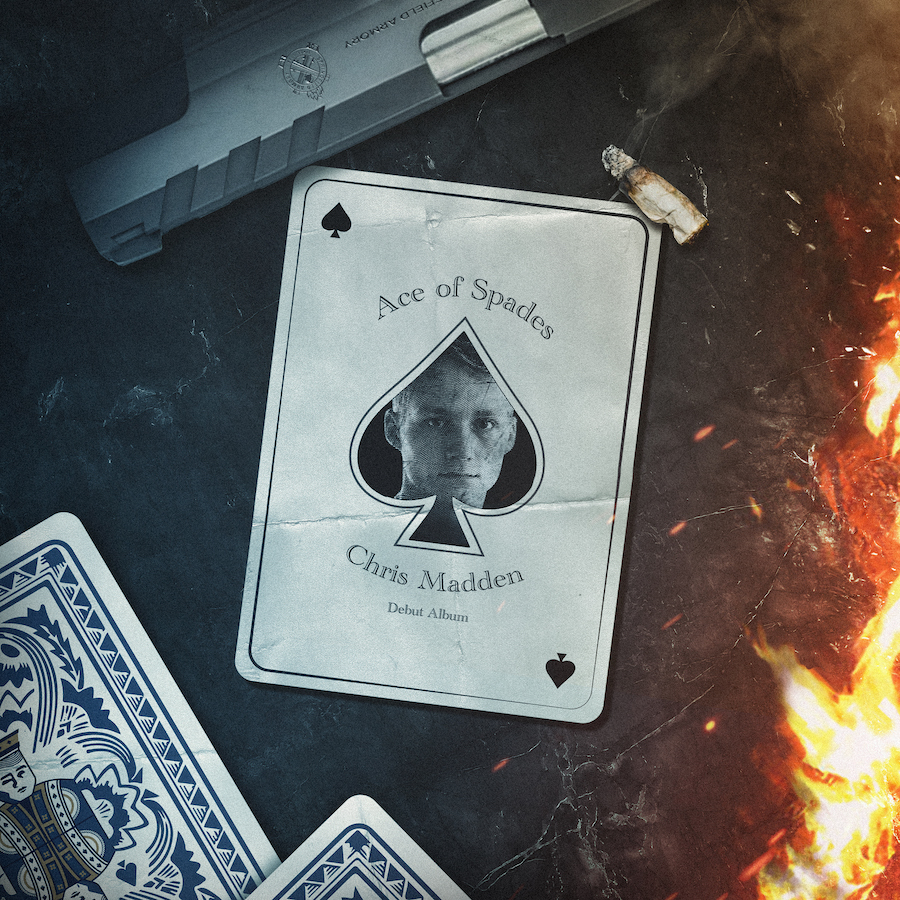 He utilizes witty wordplay, trap beats, and a fast flow in his music with the goal of surprising listeners with both its authenticity and originality.

“Poker is a game of highs and lows, with each move you can spell out extreme fortune or loss,” Madden explains. “In my eyes, life isn’t very different. Ace of Spades as an album demonstrates the volatile up and down journey that life can take you through, but with the swagger and confidence of someone with an Ace up their sleeve.”

“Since infancy, I’ve wanted to be the best,” Madden reflects as he speaks to the inspiration for his new track “Hermano,” which kicks off the album and features Carlyn—Montreal’s young ‘nightmare pop’ singer/songwriter and Madden’s labelmate at mother company Indica Records.

“As I grew up and realized that you need to be the best at something, I found myself gravitating towards music. ‘Hermano’ is a ballad for all those that feel the same ambition and desire to be on top, yet still fight the temptations that inch closer to stopping those dreams.”

Ace of Spades is experienced in three parts. The Club is filled with glamour and unfiltered idiocy, but the fast life brings consequences. Themes of regret and self-destruction take place in high tempos and robust sounds. The Heart holds love songs, which vary from sad and slow to ecstatic and upbeat. Madden reveals lessons learned from relationships and offers a new level of vulnerability. The Diamond symbolizes an obsession for the finer things in life, fueled by an undying desire to live a life of fame and fortune. Madden examines the source of his jealousy and dissatisfaction, born from the belief that he was different from those and the world around him.

Listen to Ace of Spades below, and find out more about Chris Madden via our Five Questions With segment.

My name’s Chris Madden, and I’m an artist based out of Montreal who makes pop-rap music with heavy inspiration from the Top 40’s of the last couple of decades. My parents listened to a super diverse range of music while raising me, like some Mozart and The Beatles from my mom with a bunch of jazz from my dad. Just to explain some of the sounds, you’ll hear in my music, as it definitely isn’t rooted in just rap. I started making music for fun, and it naturally evolved into where I am now, making music while signing to a label in a foreign country. Who’s to say it can’t become more?

I just finally released my debut studio album, Ace of Spades, and I’m really proud of how it came out. It’s been a little over two years in the works, from writing the first lyrics to coming up with some of the first melodies, so it’s very satisfying to finally release it! When you’re doing a project like this that influences so many people – and quite a few steps along the way – it really takes a lot of time.

There are influences from the dominant aspects of my life throughout the project: the fast life of partying and clubbing, the love life of a young person in a city, and the pursuit of lime-light, fortune, and success. Aside from those kinds of overarching themes, I usually just thumb through some of my memories from the past few weeks and write pretty literally about my experiences. Still, of course, there’s a bit of leeway for glorification.

I’ve got a show coming up in Montreal that should be announced in the next few weeks, but I can tell you already that it’s going to be a really good one. Some professional commitments got in the way of the first few shows planned after the album release, which was a shame, but this show will bring it all back. It should be in October at the Blue Dog in Montreal, QC.

My goal for 2022 is pretty simple: get back to writing and releasing music at a more regular rate. It’s been hard being unable to release music, and honestly, it completely stagnated and stifled my “career.” So I’ll for sure be looking to get back to the type of relationship I had with music a couple of years back, before Covid and everything.