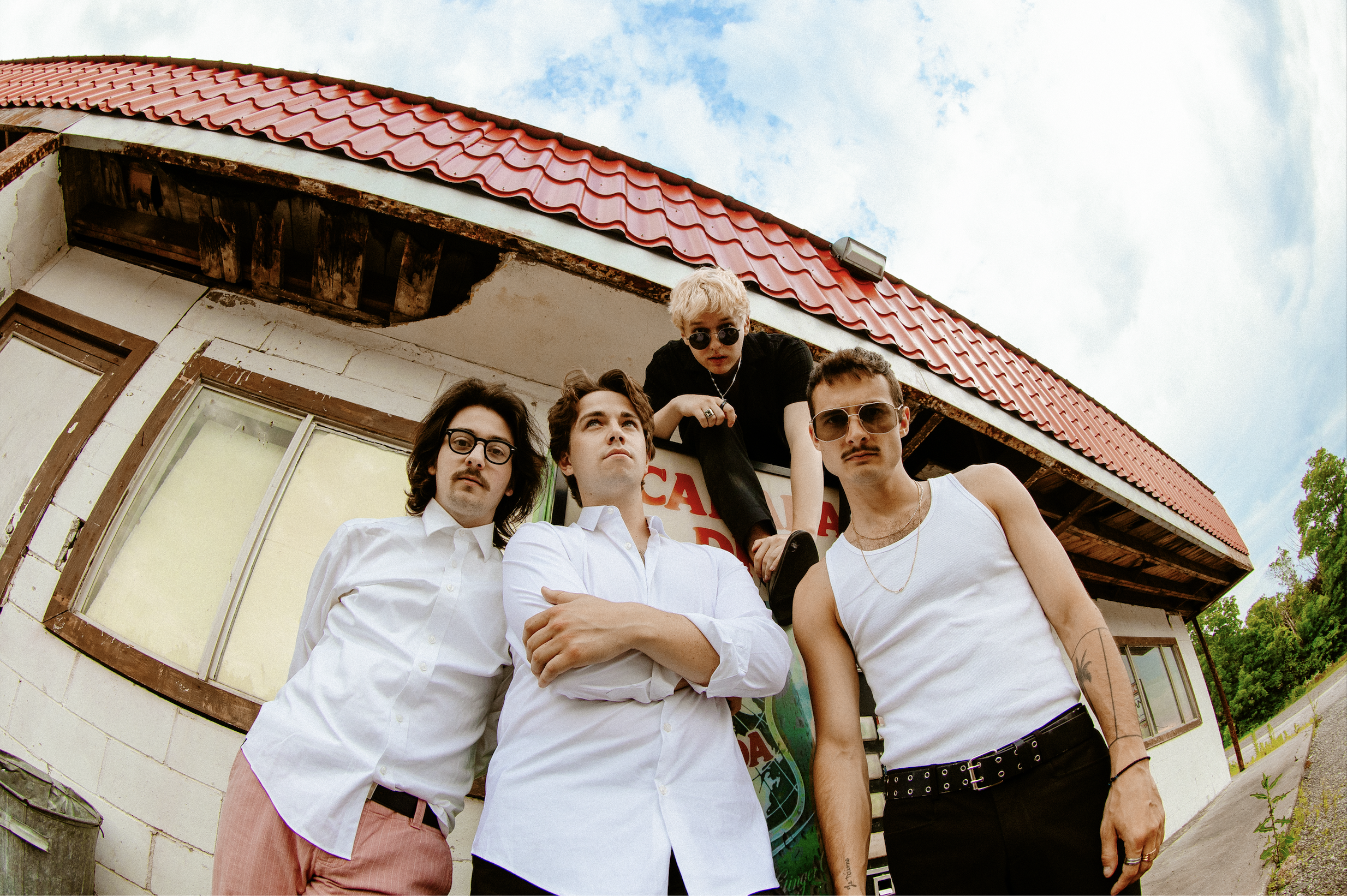 London, Ontario indie pop band New Friends went viral with “Purple Candy,” the first song they ever recorded when they barely knew each other – now at 5.5 million streams and counting. After winning Slaight Music’s $100,000 It’s Your Shot contest, the group went on to develop their sound.

Now, they’ve unveiled their newest single, “Doomed,” a Y2K dance party-themed song all about being self-aware of one’s hazardous and chaotic approach to relationships.

It’s an upbeat and satirical reflection on being reckless that urges listeners to acknowledge the issues in their love lives, smile, and worry about them tomorrow. Featuring vocals dripping with attitude and confidence, New Friends combines acoustic nostalgia with a bombastic, electrified chorus.

The music video features New Friends transforming their label’s offices into a club.

Watch the video for “Doomed” below, and find out more about New Friends via our interview.

Hey! We’re New Friends! We’re a band from London, ON, made up of four members. Conrad, Cole, Ayden, and Stefan.

You have unveiled your newest single, “Doomed.” What can you tell us about the writing process of the track?

The writing process with “Doomed” was quite exciting and different from how we’ve written songs previously. It all started with a narrative that writer Cassie Dasilva began to present to the group. It was all about the toxicity that people bring into relationships. It opened up the floor to some great conversation about what each of us has done in previous and current relationships that may not have been the best choice. Eventually, the song formed into a bunch of anecdotes stemming from the group’s troubles of creating a healthy relationship while also living the very chaotic life of an artist.

You also shared a music video to accompany the release. What was the highlight of the video shoot?

The video was a blast to make! Our favourite part was working with Keegan Boulineau (Stefan’s brother) on this one. Keegan is always a pleasure to work with because he wants to make sure our vision is executed well and comes across better than we imagined. He’s also just great to be around. The location was also a highlight because we shot it in our record labels offices. So, going from meetings and sessions in the workplace to then turning it into the “New Friends HQ” was, I think, more fun than it should have been.

“Doomed” follows your previous release, “That’s Whatsup.” When can we expect an EP or album release featuring these tracks?

“Doomed” is the first single off our new record called Camaro. “That’s Whatsup” was our one-off single previous to the Camaro era. It had more of a purpose than being a 4/20 anthem. It also signaled a change in attitude and sound for the group. We wanted to make sure that our fans and any new listeners could get excited and begin to ask questions like “what are they doing next?!” or “wait, I thought New Friends was…”.

Let’s go back in time. You went viral with your song, “Purple Candy.” How would you say your sound has changed since then?

“Purple Candy” was the band’s first-ever song and, at the time, only song. There are a lot of things that “Purple Candy” taught us as a band. It gave us the reassurance and confidence to take this band to the next level. Sonically, we have grown quite a bit since “Purple Candy” came out. We are now exploring our voices, our musicianship, and most importantly, our deep and inner thoughts and feelings. Camaro is less shy than in our previous work. It is a brutally honest and self-aware record that allowed us to show a bit more attitude without being worried about any outside noise.

You ended up winning Slaight Music’s 100,000 It’s Your Shot contest. What was the high point of this experience?

Since we won the contest, working with Slaight Music has been a high point. It was a surreal feeling knowing that all of the investing in our careers has not only been noticed, but now other people outside of the band want to help and be a part of New Friends. It has been an absolute blessing to work with the great people at Slaight Music, and the support they have been showing us means the world. At the end of the day, we’re four friends who met in college and just loved making music with each other, so Slaight’s involvement has us forever grateful for the journey ahead.

We would love to collaborate with Shawn Mendes. We’re absolute fans of not only his music but who he is as a person. His writing style and approach is something the entire band respects and loves. We’re also massive fans of Scott Harris, who is a frequent co-writer with Mendes as well. We’re always students in this business and love learning from the greats.

You need to sing a song at karaoke. Which song do you choose?

If Stefan is on that mic, “Hold the Line” by Toto. If Conrad is on the mic, it’s always “Don’t Look Back In Anger” by Oasis. Ayden’s go-to is “You Get What You Give” by the New Radicals, and Cole is “Tequila”.

If you were asked to give some advice to a brand new band, what would it be?

Our advice to any new band is just to keep going. Making and performing music is a gift. Everything after will come with time and hard work, but never forget that if you have even one person show up to your shows, or 100 streams, you are already winning. Keep working hard and trying to be the best you can be, and people will take notice. It’s going to be the biggest ups and lowest lows. Learn to love every part of the journey.

For the remainder of the year, it’s playing more shows and a new single, maybe even two. We’re hitting the road and doing a tour of southern Ontario in September. Can’t wait to see people at the shows!

Thank you for having us for the interview Canada Beats! It was a pleasure, and thank you to the readers! We hope to connect with you all soon 🙂 -NF x