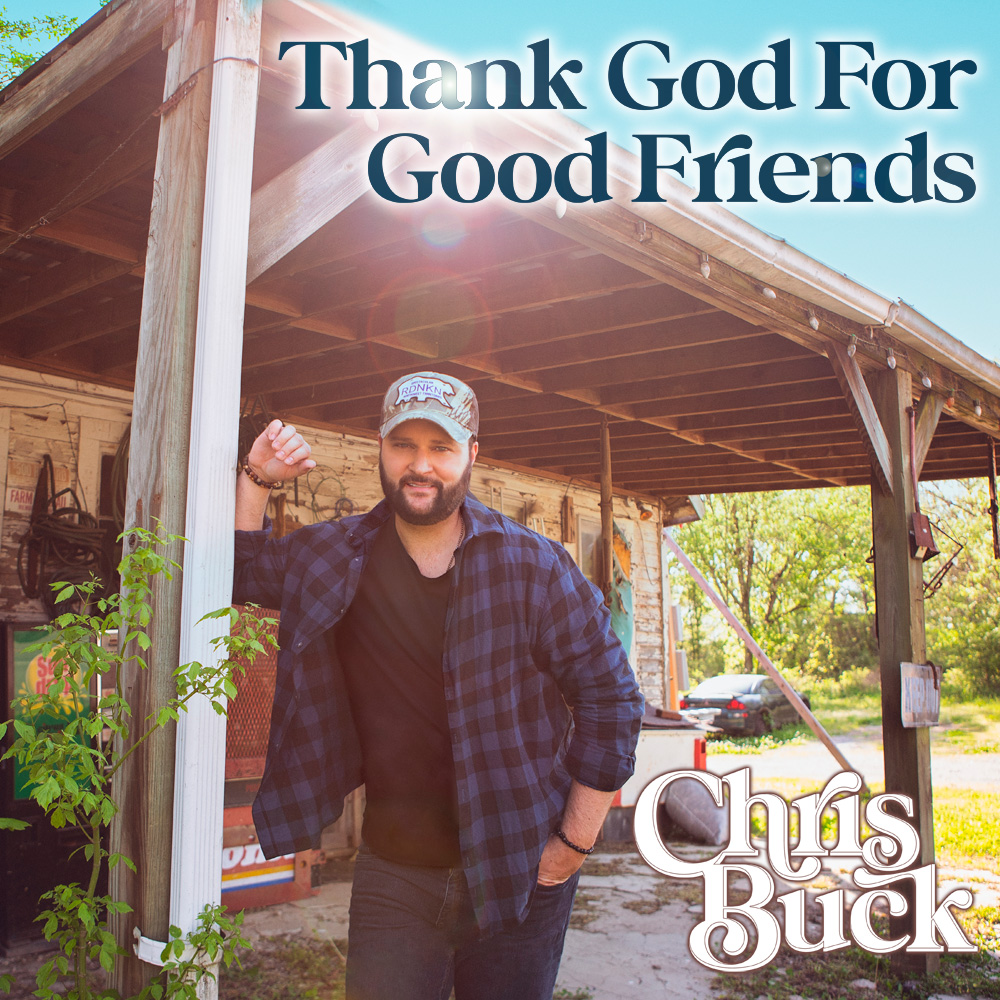 Chris Buck is back with his second single of 2022, “Thank God For Good Friends”

The second single from Chris Buck, “Thank God For Good Friends,” is a heartfelt anthem saluting those good friends who stick with us through thick and thin. It’s produced by Jeremy Stover/Julian King and Dan Swinimer as part of the album coming from Chris Buck in early 2023.

Chris wrote the song with his good friends Chrystal Leigh and Baker Grissom after being inspired by a chance meeting with another songwriter.

“Funny enough, the song became an idea a few years back. I was out at a dive bar west of Nashville, and my friend pointed out a fellow and said that guy wrote Friends In Low Places by Garth Brooks!” says Chris. “I didn’t believe her, but I googled his name, Earle Bud, and realized it was him! So I sat down and spoke to him, and on the way home thinking about the conversation, I thought it was weird there really hasn’t been a friends-themed song like it since, so I set out to write one!”

Sakamoto Music’s Joelle May shares on the single,

“This is just the beginning of what’s to come from Chris Buck. Amid a couple years of immersing himself in songwriting, Chris has written some of the best songs of his career to date, and they keep getting better. Thank God For Good Friends is one of those songs that pulls you into your own nostalgia for all the good times (and the bad) with good friends, and you’ll find yourself singing it back to yourself hours after hearing it.”

Listen to “Thank God For Good Friends” below, and find out more about Chris Buck via our mini-interview.

Hey everyone Chris Buck here! I write my own songs, have a very upbeat live show, love boating, hiking, and tons of laughter. I am from BC and live just outside Kelowna. In my career, I’ve had a Gold single, five Top 40 hits, two albums, six BCCMA awards, and two CCMA nominations. I’m signed to Sakamoto Agency for live bookings, Sakamoto Music is my label, and Anthem Entertainment is my publisher.

You have unveiled your new single, “Thank God For Good Friends.” What can you tell us about the writing process behind the track with your good friends, Chrystal Leigh and Baker Grissom?

Yes, it’s so great I get to write with my good friends! I got the idea when I met Earle Bud (who wrote Friends in Low Places) pretty randomly at a Nashville bar called Alley Taps. I thought to myself, “why hasn’t anyone done another song about friends?” So after a few months of trying to find the right song title, it came to me, and I sat down with my pals to write it.

“Thank God For Good Friends” is the second single you’ve shared this year. When can we expect an album?

The album will be coming this fall/winter. It’s more of a mature-sounding album for me, recorded in Nashville and produced by Jeremy Stover (Justin Moore), Julian King (Tim Mcgraw), and Canadian hit producer Dan Swinimer. It was mixed by Juno-nominated Jay Dufour and mastered by Suite Sound.

You worked with Jeremy Stover, Julian King, and Dan Swinimer on the single. How was that experience?

The experience was amazing! Having their talented musicians on board and having #1 hit producers work on this was just the best feeling. Even more interesting, we got to record the album at Castle Recording Studio, which is where Al Capone used to live!

You played various festivals this summer, with Country Wild and Pemberton Barn Dance still coming up. Do you have any tour dates planned for the Fall?

I’ll be performing a few shows during CCMA weekend in Calgary, then back to BC, and more falls dates filling in before the end of the year!