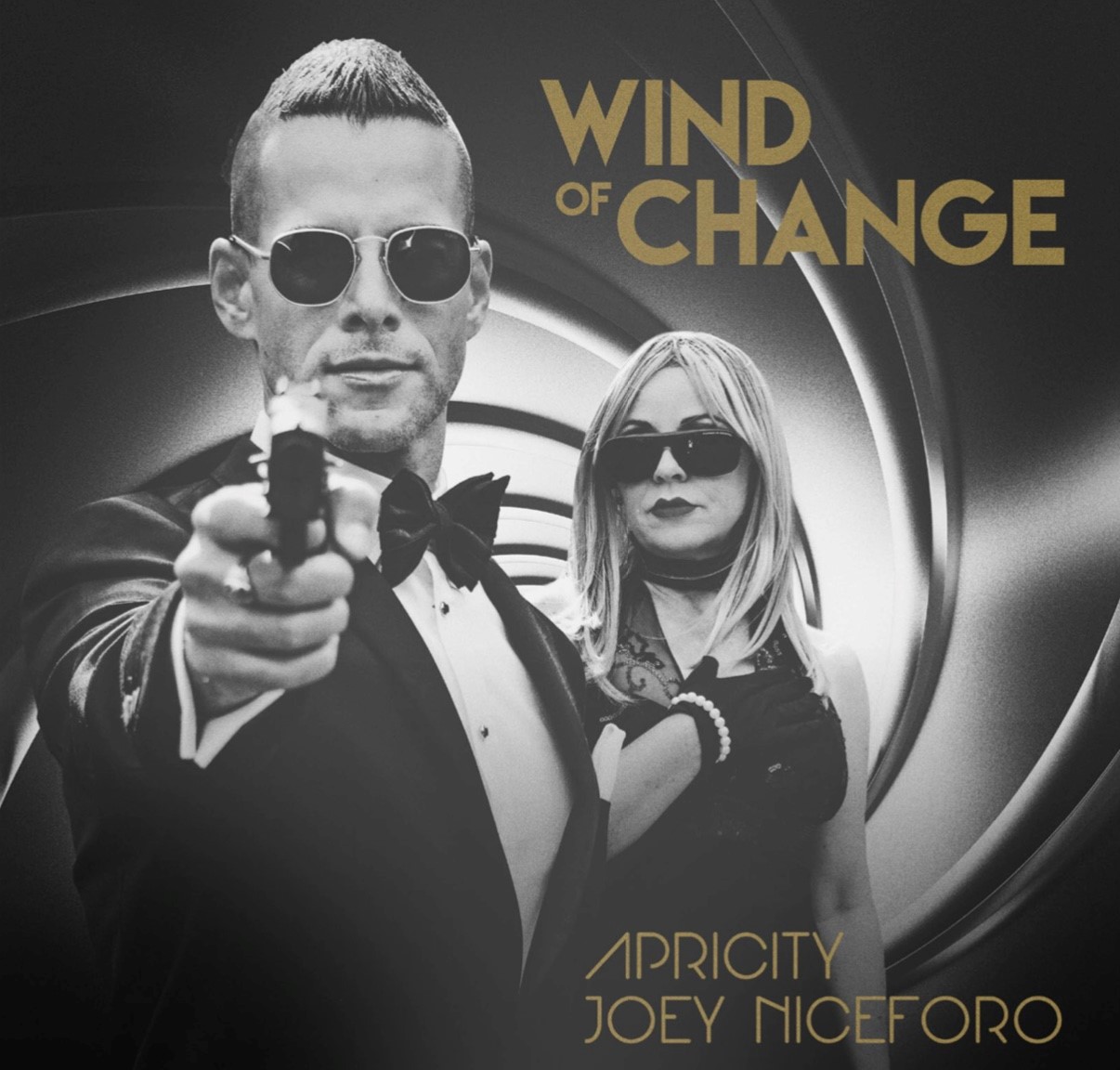 The Scotland-born, Puslinch, ON-based songstress and entertainer, Apricity is captivating audiences once again with her cover of the Scorpions 1990 classic, “Wind Of Change.”

Teaming with former Canadian Tenor Joey Niceforo, Apricity breathes new life into “Wind Of Change” while remaining pure to its original structure, transforming it into a lush and beautiful duet.

In true Apricity fashion, the song is accompanied by a stunning music video – shot in sepia, and captivating from the opening of an ominous phone call. Apricity and Niceforo are thrust into a new mission – complete with action, drama, and suspense.

“Bringing this spy-themed video to life with Apricity and Joey was an absolute pleasure. I don’t think there are many artists that could do a classic song like “Wind of Change” justice, but they were certainly able to do just that! Shooting the video was a blast, and using locations like Rosedale United Church and Dundas Square was surreal. Joey and Apricity brought a very James Bond-esque feeling to modern day Toronto, and I’m proud of what we were able to create,” says Jesse Read, Director, DropoutEntertainment.

The rock and roll vocalist has become synonymous with Canada’s music community. Having been “bitten by the entertainment bug” as a child, Apricity has dedicated her life to music and entertainment. Hailing inspiration from female leads like Shirley Manson and Amy Lee, Apricity has nestled into her own groove as a songstress, singing songs that inherently move her.

Apricity’s debut single, “All My Lies,” set the precedent for her tenure in music back in February 2021. Teaming with producer Thomas McKay, Apricity is at the cusp of a turning point in her career – finding her voice, her style, and her groove.

“I feel so fortunate with respect to the way things have played out for me,” she says. “It’s been incredibly tough in some respects, but if it wasn’t for the pandemic, I might not have had the chance to work with Vic and Tom and this great team I’ve found myself with. So many people spend countless days and hours dreaming of what they want to do with their lives but then determine it’s not realistic. So for me, this whole experience just seems surreal. It is something I’ve been dreaming of for such a long time.”

Now Apricity’s release with Joey Niceforo is steadily racking up views on YouTube with their interpretation of “Wind Of Change” and its Bond-esque cinematic music video. Whether in the studio or watching her online – Apricity is sending fans on a wild ride with this stunning cover – through spy-scape, with a heavy dose of nostalgia. It’s the “Wind Of Change” you didn’t know you were waiting for but are grateful it decided to show up.

Watch the music video for “Wind Of Change” below, and learn more about Apricity via our mini-interview.

Thank you for having me back Canadian beats Apricity here- Alt- rock artist, living in Puslinch, ON, and I enjoy sharing my stories with you

What drew you to cover Scorpions’ “Wind Of Change”?

This is such an emotional song that means so much to many people I remember hearing it growing up, and it was always a song I enjoyed, and over the last couple of years, it has been on my playlist

I can feel it in the pit of my stomach every time I listen to it. I can feel every word that is in that song, and I think with everything that has gone on in the world in the last two years – it just fits.

How did you meet Joey Niceforo, and what made you decide to have him on the song?

I watched a performance at Christmas with Joey that he did online out of his home up north. He had such warmth and emotion in his voice… Such a talent. We started chatting, and at the time, I had wind of change in the back of my mind, and I thought to myself how great would this be to do it with another artist I felt he could add that classical vibe to the song, which he did in such a wonderful manner. Joey was by far mesmerizing to work with

I would have to say Alanis… in fact, I’m still going sideways. So much so that I’m not sure which side is the right way up 🙂

Well, with that being said, I have to say, Alanis – any album of hers is fantastic, but it must be listened to at full tilt …loud!