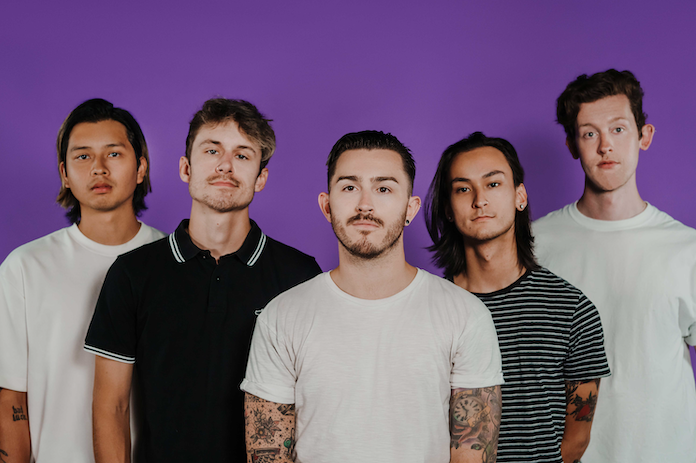 Chief State releases their debut album, Waiting For Your Colours

Vancouver, BC pop-punks Chief State have released their long-awaited debut full-length Waiting For Your Colours.

The follow-up to the band’s 2021 stand-alone single “Metaphors” and 2020 breakthrough EP Tough Love, Waiting For Your Colours is the culmination of 5 years of relentless hustle (not to mention a boatload of blood, sweat, and tears).

The journey to get here began with frontman Fraser Simpson, who, at an impasse in his life, decided on a whim to leave his home in the UK for Japan in 2014 and eventually move to North America to form a band via Craigslist, where he connected with Nik Pang, Chloe Kavanagh, Justin Pham, and Joseph Soderholm to create Chief State.

Uncertainty, longing, a search for meaning, and assessing life choices make up the new album’s themes, which chronicles closing out your 20s at a crossroads and examining where we belong, our place in the world, and allowing ourselves the time to figure it all out.

“There’s definitely a coming of age theme on the new album. We’re asking ourselves: What am I looking to get out of life, out of being in a band? What joys do I want to pursue and where do I want to place my energy moving forward? We’ve come to the realization that we all need to stress less on the things we can’t control and enjoy more of what we have, what we can control and the journey itself.”

Listen to Waiting for Your Colours below, and find out more about Chief State via our Five Questions With segment.

We’ve just released our debut full-length album, Waiting For Your Colours! This is our pandemic, baby, you can certainly hear some of the lockdown feelings in songs like Wasting Away, but the album focuses on the mindset I was in at the time of writing. The common theme is of trying to find your place in life, coming to the end of your twenties, and not really knowing where you stand and who you are.

At the time, I was asking myself, what am I looking to get out of life, out of being in a band? What joys do I want to pursue, and where do I want to place my energy moving forward? I realized that we all need to stress less about the things we can’t control and enjoy more of what we have, what we can control, and the journey itself. The album was actually finished and ready 12 months ago. We’ve been very quiet and kept it under our hat, hoping that we’d be able to release it at a time when the world has some ‘normalcy.’ Who knows what normal is anymore but at least we were able to tour alongside the album release, which is something we couldn’t do last year!

Oftentimes it comes from personal experiences and feelings. Myself (Fraser) and Nik write the majority of the songs. I write nearly all of the lyrics. I’ve found that trying to force a song never really works, or at least it doesn’t quite make the cut. Whenever I’m feeling strongly about anything, whether sad, angry, or agitated, that’s when I pick up a guitar, and songs tend to come out very naturally.

We have just come off of a five-week US tour. We don’t have anything else lined up for a while. We do have some local shows, so if you’re in the Vancouver, BC, area, keep an eye out in the coming weeks for show announcements! Otherwise, we will look at touring opportunities in the coming months into next year, but nothing is set in stone just yet!

Our goal was to release the album and play as many US dates as possible! We’ve just returned home after a grueling month on the road, so it’s time to take stock and decide on our next steps. We’ve been writing a little, and there are talks of recording an acoustic EP, so I’m sure we’ll be back in the studio before the year is out.

Our only other goal is to fix up our burdensome van, which caused some issues during our tour! So if you’re in a charitable mood, hit our merch store at www.chiefstate.com and pick something up to support us and help get this van back on the road!