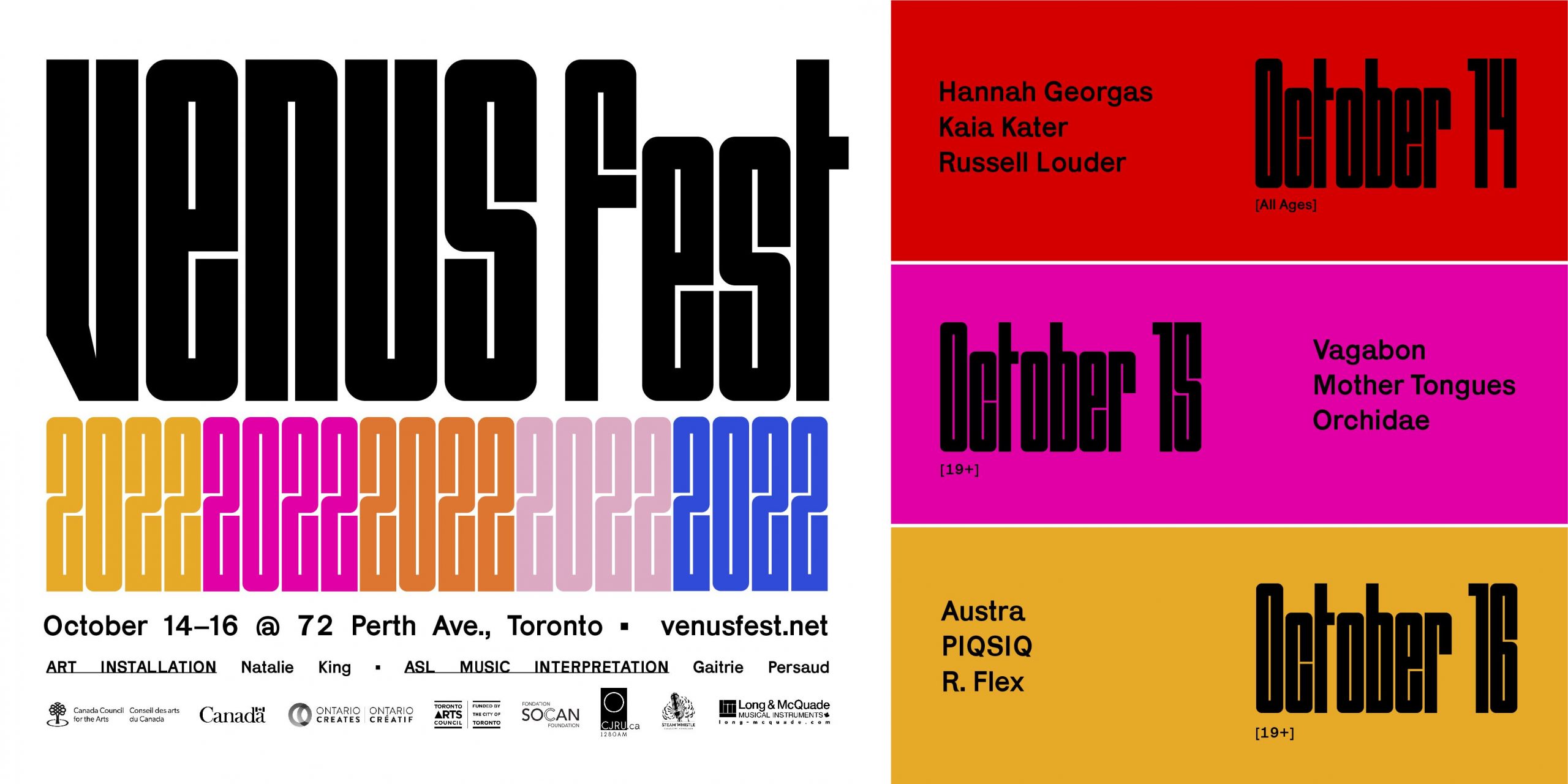 Venus Fest is thrilled to announce its return to in-person programming, with the sixth edition of the festival taking place October 14-16 at 72 Perth Avenue amidst the rich artistic history of Toronto’s Lower Junction Triangle.

Venus Fest 2022 features live musical performances by a sensational lineup of Indigenous, Canadian, and international artists pushing the boundaries of music. Continuing its mission to create an inclusive space that addresses historical and ongoing industry challenges, the Fest embraces the many identities within music, providing a platform for fresh voices that are pushing for change as we work together to eliminate gender disparity on stages across the country.

Venus Fest 2022 also features a diverse roster of talented musicians traversing genres and an immersive art installation by Natalie King, queer interdisciplinary Anishinaabe (Algonquin) artist, facilitator, and member of Timiskaming First Nation. Often involving portrayals of queer femmes, King’s works are about embracing the ambiguity and multiplicities of identity within the Anishinaabe queer femme experience. Her installation will draw inspiration from her thought-provoking, colourful paintings to engage with audiences and animate the festival space. 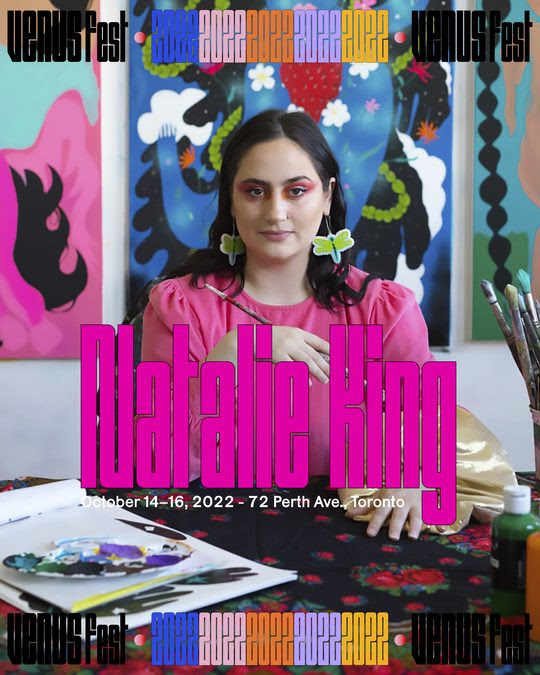 Committed to creating an inclusive and accessible experience, Venus Fest will also have ASL Music Interpretation from Gaitrie Persaud, founder and artistic director of Phoenix The Fire – a theatre community hub for IBPOC Deaf artists – as well as a Restorative Zone and a community engagement and interactive space with audience activities.

Tickets and wristbands for Venus Fest 2022 are available here.

Hannah Georgas
Acclaimed indie-pop singer-songwriter Hannah Georgas has an endless capacity for crafting textured pop songs that confound her audience’s expectations. Since her debut EP in 2009, Hannah has grown from a regionally-based artist to an artist who tours worldwide.

Kaia Kater
Montreal-born Grenadian-Canadian Kaia Kater’s jazz-fueled voice and deft songcraft have garnered critical acclaim from the likes of NPR, CBC, and Rolling Stone, as well as a Juno Nomination. Kaia leans into a wide array of sounds and styles in order to convey a broad range of emotions and topics.

Russell Louder
Songwriter, producer, and performer Russell Louder’s music is carried by a powerful, clear voice reminiscent of Austra. You only have to see them in concert once to fall for the luminous and authentic world they built. In 2021, their debut album Humor made it to the Polaris Prize Long list.

Vagabon
Vagabon is a vibrant culmination of influences, emotional landscapes, and moods, a colorful and masterful statement by an artist and producer stepping into her own. “Break the rules you think you are bound by” is the recurring sentiment of her second album under the Vagabon moniker.

Mother Tongues
Mother Tongues harks back to a time when music and mysticism were entwined, carrying on the canon of psychedelic music that came before them and taking things somewhere new and unexplored. Listeners of Stereolab, Bjork, Broadcast, and My Bloody Valentine will rejoice!

Orchidae
The experimental-pop project of Yolande Laroche, a Franco-Taiwanese Canadian artist, is based in Gatineau, Quebec. Soft, hypnotic melodies intertwine with minimal yet meaningful arrangements and, at times, psychedelic orchestration.

Austra
The vivid music of Austra is born of the creative force that is the producer, songwriter, and recording engineer Katie Stelmanis and the most powerful instrument at her disposal – her voice, one that is capable of effortlessly evoking moments of personal and universal drama.

R. Flex
Named as Now Toronto’s Artist to Watch in 2022, R. Flex is scrupulously revealing their vision for 2022. Known for their arresting live performances and having just released their incredible second EP FLEX WITH BENEFITS, R. Flex is ready to change the shape of R&B.