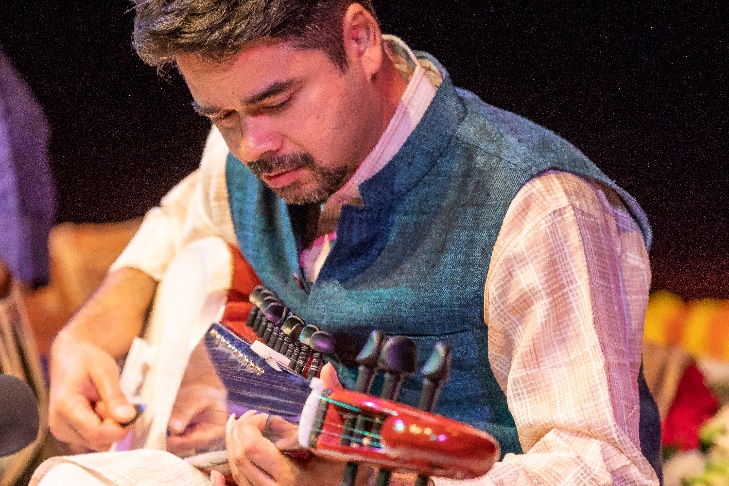 Arnab Chakrabarty, one of the most significant virtuoso sarod players of our times, and among the finest raga musicians in the world, has released his third full-length album, and first in a decade, Cat’s Cradle – Fresh Expressions in Vintage Ragas.

Chakrabarty has evolved into a master of his craft, one of the deepest thinkers of Hindustani raga music today. Cat’s Cradle marks his recording debut as a composer of the gat, a melodic composition in a specific raga, set to a particular time cycle. The structure of the gat inspires impromptu improvisations according to an artist’s mettle and imagination. As his own compositions in time-honoured ragas, the gats in this album are true vehicles of Chakrabarty’s personal expressions.

Chakrabarty has had his mind – and ears – open to other musical forms. While he’s a thorough classical musician, he has internalized useful techniques from the guitar and the banjo without compromising on the aesthetic substance of his musical tradition. For him, these additions have held meaning as they have expanded the sarod’s potential. He’s had an illustrious career as a performer, having played more than 850 concerts over the course of 20 years. He’s recorded for feature films, including the 2005 Oscar winner, Born Into Brothels – Calcutta’s Red Light Children.

Cat’s Cradle consists of five self-composed pieces, each set in a traditional raga of Hindustani music. The album opens with raga “Bhimpalasi,” a typical example, draws its essential structure from the Kafi mode (the equivalent of the Dorian in Western music). It omits the second and sixth in all ascending movements but displays a full, linear descent. The focal points or the musical pivots of this raga are the fourth and the seventh. The composition is set in the Sitarkhani Taal of 16 beats, a variation on the well-known Teental cycle.

Listen to Cat’s Cradle below, and find out more about Arnab Chakrabarty via our mini-interview.

I am an exponent of Indian classical music, also known as Rāga Music, after its driving principle, the rāga, a melodic construct around which performances are created. This broad umbrella of musical thought has two distinct traditions, Hindustani music, which represents India’s cultural North, and Carnatic music, representing India’s cultural south. I perform and teach the Hindustani music tradition, and over the years, have come to be considered one of the leading experts of the sarod, a multi-stringed, plucked, fretless instrument of the guitar/banjo/lute family.

For those who have not heard of the sarod, care to explain?

The sarod is a plucked, fretless instrument. It is most recognizable due to its polished steel fingerboard and skin radiator (top); the latter being reminiscent of a banjo. I describe the sound of the sarod, variously, as “liquid” and “glassy” due to the profusion of sliding textures we create, emulating the human voice, albeit within the limitations of a plucked instrument.

This instrument is relatively young, having evolved into a recognizable form about 250 years ago from the Afghan rabab. The world’s most famous sarod master was Ali Akbar Khan (1922-2009). Another influential modern maestro was his illustrious contemporary, Radhika Mohan Maitra (1917-1981).

Over its millennia-long history, India has been a nation of immigrants, and the sarod is a gift to Indian music from its Afghan settlers, whose engagement with India’s classical music led to the emergence of the sarod.

I am a student of the foundational school, or gharānā, of the sarod, that of Shahjahanpur. The most important artists of this tradition were Sakhawat Hussain (1875-1955) and the aforementioned Mr. Maitra.

You recently unveiled your third full-length album, Cat’s Cradle – Fresh Expressions in Vintage Ragas, what can you tell us about the writing process behind this release?

In Indian classical music, we typically do not write music in the sense that is understood in Western musical traditions. Much of the music is created on the spot in performance, based on highly prescriptive grammatical rules of a rāga. However, in some aspects of the music, such elaborations demand a compositional framework (known as gat, lit. “movement”) that informs and enables an artist’s imagination while exploring a raga.

A gat typically consists of three parts, each covering one or more rhythmic cycles (known as tāla). The first two lines cover the most salient melodic ideas of a rāga in the middle and lower octaves, while the third line is composed to delineate the most efficient approach to the upper octave as per the dictates of the rāga, returning swiftly to the first, central line. The performance per se then emerges as a set of variations and solos around this melodic theme, with its goal being to sound as composed and seamless as possible while being almost 70% improvised!

Composing gats is not a task for a beginner, or even an intermediate level musician. It is a daunting task to publicly state your thesis of a rāga through a melody of your own creation. It is one that involves taking responsibility and staking your reputation on! That’s why we still play gats composed by masters who lived and worked 150-200 years ago, albeit with our own elaborations and explorations!

This is your first album in a decade, what have you been up to during this hiatus?

In this decade, I have been practicing, and constantly working on enhancing my intimacy with the instrument. I have also been designing new sarod prototypes, teaching, and moving cities (and countries) at an alarming pace. During this period, I have lived in Hungary, the UK and since 2018, here in the Toronto area.

My life, however, revolves around my daily musical practice and relentless efforts at creative advancement. I am not a networker or hustler of the sort that capitalism expects its poster boys (and girls) to be. So, I work slowly, at my own pace, without the slightest urge to compete with anyone for a piece of the market pie. I only compete with myself. I must be better tomorrow than I am today.

I hope to secure some funding in the coming year to record a different kind of album, featuring full-length (30-60 minute) performances of ragas, using traditional compositions. I also have plans for video documentation of shorter-length legacy material dating as far back as the 1850s.

While I do not possess conventional entrepreneurial acumen, I am keen to put together some kind of recurring festival of tasteful Indian classical music here in the Toronto area, as well as in India. This kind of music needs robust institutions in order to find its way in the 21st century.