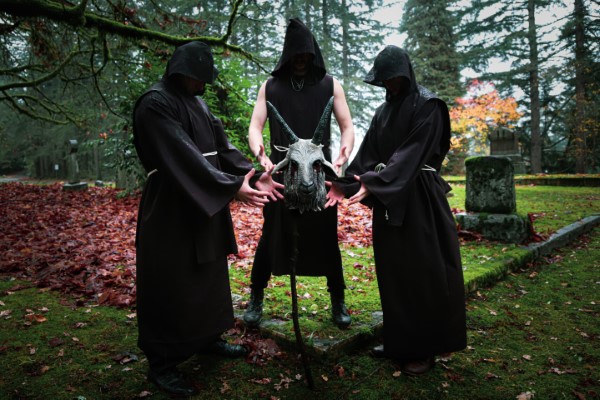 Vancouver, BC-based death metal monsters Thirteen Goats is made up of Rob Fitzgerald (Guitar/Vocals), Graham K. Miles (Vocals/Guitars), and Mike Redston (Bass/Vocals). The trio is eclectic, over-the-top, and just a little weird. Taking cues from some of extreme metal’s most infamous acts, they create a tongue-in-cheek blend of different genre hallmarks that’s as hook as it is heavy.

Thirteen Goats has unveiled their debut album, Servants of the Outer Dark, which features nine tracks, bringing the album length to 38 minutes and 34 seconds. If you’re a fan of death metal, this release is for you.

Listen to Servants of the Outer Dark below, and find out more about Thirteen Goats via our Five Questions With segment.

The name of the band is a reference to our mascot: an immortal dark messiah named Shepherd who’s basically the Antichrist. He wears a goat-skull mask and is always accompanied by 12 demon goats who function as his unholy disciples. Together, they are Thirteen Goats, and Servants of the Outer Dark—which is the name of our upcoming debut record.

Our primary songwriters are myself, Graham K. Miles (lead vocals & guitars), and Rob Fitz-Gerald (lead guitars & vocals). We’re currently joined by Leonid Verman on drums and Cody Lewichew on bass, with help from our friend Callum Meadley. The record also features some songwriting contributions from our original bass player, Mike Redston of Snakeblade.

Servants of the Outer Dark is nine tracks of punchy, over-the-top extreme metal that aren’t afraid to have fun while sounding heavy as hell. The record has one foot in the past and one in the future—we pay homage to our heroes but try as hard as possible to take the ideas that inspired us in fresh new directions and make them our own.

We didn’t limit ourselves to specific subgenres or lyrical topics. This is mostly a death metal record, but it’s got elements of black metal, thrash, groove, grind, and all kinds of other stuff. Some of the songs are personal, others are political, and a few are just goofy. For example, we have a song called “Constant Torment” that’s a fairly dark song about mental health and suicide awareness, and then another one called “Vacuum-Induced Head Explosion”, which is literally just a four-and-a-half-minute banger about… making people’s heads explode. But I think that’s kind of how we see the world: life is full of darkness, but sometimes you need to take it seriously and sometimes you need to have a sense of humor about it. The trick is knowing when.

We’ve put together three videos for this first album that we’re really proud of: a fairly straightforward lyric video for the song “Unholy Mass”, a fully-animated video featuring our mascot, and caricatures of various world leaders for our politically-charged single “Return to Ruin”, and a live-action video for the title track, “Servant of the Outer Dark”, which was directed by award-winning filmmakers Nessa Aref & Alysson Hall. That last video is really cool—it weaves together shots of the band with a narrative short film that Rob and I also act in, and which pays homage to everyone from Akira Kurosawa to Ari Aster and Steven King (whose Dark Tower series inspired the lyrics).

The “Return to Ruin” video is also something really special to us—it speaks quite directly to Russia’s ongoing invasion of Ukraine, which is something we take quite personally as a band full of Eastern Europeans. Our drummer is first-generation Russian, and I’m third-generation Ukrainian, and both of us are outraged by what’s happening. So we wanted to create a video that let people know how angry we were, and how angry we think everyone else should be.

The “Return to Ruin” and “Unholy Mass” videos are already out on our YouTube channel. The live-action video for “Servant of the Outer Dark” will drop a few weeks after the album releases on July 1st.

That said, though, we are starting to play shows again. We’ve got two currently planned for July in the Lower Mainland, and we’re hoping for many more to come.

That’s so hard to answer because Canada has produced so many incredible musicians—inside and outside of the metal world. But as lead vocalist for this band, I’m really inspired by Lord Worm, the original vocalist of Cryptopsy. I find his lyrics incredibly poetic and his delivery absolutely savage. I also really appreciate his theatricality—I have two degrees in theatre and completed my MFA at the former Actors Studio at The New School in New York City, so I respect the hell out of strong stage presence. And when it comes to stage presence, it’s hard to beat eating live worms in front of an audience.

To eat live worms in front of an audience.

Just kidding. I’d like the band to go on tour, I’d like to find us a label, and I’d like to get album number two underway. The songs are already written—we just need to polish them up and put them out there. It would be really cool if this first record paved the way for us to reach more people and acquire the resources to act on some of our bigger ideas. We have a lot of plans for this band.