ShazamFest returns with 2022 instalment to electrify the summer 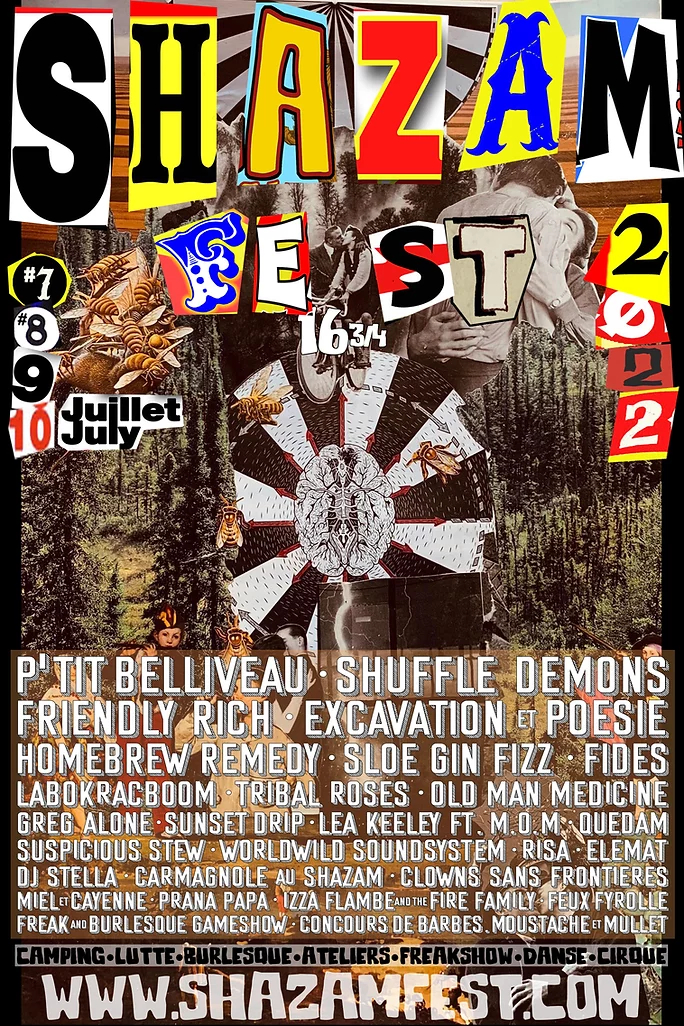 ShazamFest is a four-day festival full of fun fit for both families and fanatics, and it’s back for 2022 after the pandemic gave everyone an unwanted break.

“ShazamFest is like a giant house party,” says Founder/Director Ziv Przytyk, whose picturesque organic family farm will once again serve as the setting for the festival’s summertime cabaret of mirth, merriment, and controlled chaos. “It’s the gathering of the tribes. Times have been tough for a lot of people, so we’ve created a space where everyone can leave their woes behind, be entertained, and begin to dream again.”

Not to be outdone, dance-seeking festivalgoers will surely delight at this year’s lineup of talent on the ones and twos. Battle-tested since 2005, DJ Risa’s globetrotting style incorporates everything from reggae and dubstep to nu cumbia and post-trap. Fancy something a bit more exotic? Something a bit more indebted to global trance fit to bliss out to? DJ Prana Papa has you covered. And how could we neglect to mention the peace, unity, and mindfulness both represented and exemplified by the Worldwild Soundsystem — whose very presence all but ensures the vibes will be immaculate for the party people in the place to be.

“Part of the festival’s mandate is to support local/regional art and communities,” says Ziv. “Fifty percent of the acts are from the area, the Eastern Townships. People are going back to shows, and we want them to know that they can buy a ticket to a major international artist coming to town, or they can come to ShazamFest for not just one local act, but a whole slew of them!”

Looking for more than music?

As usual, music isn’t the only thing on offer at ShazamFest, as the festival’s neo-vaudeville cabaret of all-encompassing entertainment once again brings forth talents including but not limited to the big-hearted world-travelling love & laughter merchants of Clowns Without Borders, the physical/intellectual hybrid circus artistry of LaboKracBoom, the daring and revolution-tinged multidisciplinary carnival stylings of Carmagnole, and the irresistibly exotic rhythmic bliss of the Tribal Roses dancers. The complete list of performing artists is available here and of workshops here.

Got a beard, a moustache, or a mullet you’re especially proud of and want to show off? You’re in luck because there’s a competition just for you with trophies and prizes awarded to those whose hairs are deemed to be most fair, including the ultimate crowd-pleaser Best Fake Beard category for children and adults of all genders and ages! And, for fans of the proud Canadian tradition of heroes, heels, and gravity-defying leaps off the top rope, wrestling will make its return to ShazamFest this summer, with the beloved local grapplers of L’Académie de lutte estrienne set to piledrive and bodyslam their way into your hearts.

The festival’s KidzZone component is back by popular demand to spread the ShazamFest magic to all ages and keep the little ones entertained! A unique space devised for children is set to dazzle once again with a weekend-long program made up of age-specific performances, workshops, activities, and a talent show!

KidzZone also offers 3 daily meals + snacks throughout the entire run of the festival for a modest $25 per child, with discounts offered for multiple children — in addition to free unlimited spring water tapped right at the source, free festival access for children under the age of 13 and free camping! Find out more about KidzZone services & programming here.

ShazamFest’s commitment to environmental and ecological responsibility is a defining feature of the festival and has been since its very beginning. In 2019, the last pre-pandemic edition of the festival, 2000 attendees produced a mere 12 bags of trash over 4 days — a far cry from the unconscionable amount of waste generated at mainstream gatherings.

As in previous years, the ShazamFest team discourages festivalgoers from bringing single-use plastics onsite. The festival will have stainless-steel travel mugs readily available upon arrival, as well as reusable dishware and cutlery, compostable cups, and unlimited free spring water tapped at the source. All of the stages and structures are hand-built with recycled or reclaimed materials found on the site, and the annual post-festival garbage sorting party is back as well with free drinks and meals for anyone wanting to lend a hand!

A True Celebration of Arts & Culture

“In a way, ShazamFest is the antithesis of corporate festivals, the anti-Coachella,” states Ziv. “Here, you won’t see advertisements onsite. You don’t feel like you’re at a big commercial event because you’re not. I’m an artist at heart, and that’s the spirit behind the festival.”

ShazamFest is a festival for artists, a place where even the misfits fit in and where those in need of an affordable break from everyday life can seize the opportunity to both find and build community.