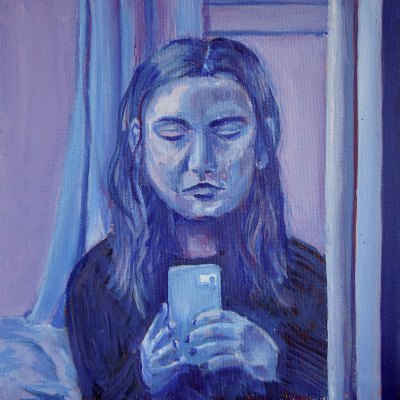 TOVI (Rebecca Emms) vividly bares it all on her first full-length album⁠—her thoughts, her emotions, and most certainly her talent. I Keep Floating Away is one of the more impressive debuts to come out yet this year, made all the more so by the fact that much of the release was written and captured by the artist alone in her Toronto bedroom.

Perhaps the creation process partly accounts for the album’s deeply expressive and intimate sensations. Some of the musical components sound like something The Faint might produce, including the vigorous and effects-heavy “I Don’t Think We Can Be Friends,” albeit it with vocals more akin to those of Alvvays, or Emily Haines at her most melodic.

In fact, portions of certain songs such as “Loose Ends” or “Tennessee Baby” might easily be mistaken for snippets of a Metric tune. Such is the result of TOVI’s delicate and sometimes-whispery vocals, along with her slick use of melodic synth and guitar with frequently boisterous rhythmic elements to generate a moody atmosphere.

The songs often feel like traversing a serene dreamscape with the threat of a nightmare looming in the background, and the two extremes continuously pushing against and blending in with one another. As hinted at by the jam-session-redolent “Storm Warning,” the lyrics reflect that same sort of cohesive tension, being based on themes of destruction versus agency. It is as though a psychic tug-of-war is taking place sonically and personally, unfolding in a way that acknowledges the darkness while allowing it to be superseded by the light.

The song “Progress” may be most exemplary of this, having a wholly sullen tone but with a message full of hope in even the slightest achievements of self-betterment: “I hate myself a little bit less than I did yesterday. I’m making progress.”

In multiple respects, TOVI invites listeners to glimpse into her most private of spaces with this album, and that kind of vulnerability is something to be admired, on top of the supreme calibre of the music and lyrics themselves. Altogether, I Keep Floating Away is both intense and beautiful⁠—and oh, what a vibe it is.