Home / Interviews / Art d’Ecco shares on his new album, After The Head Rush

Art d’Ecco shares on his new album, After The Head Rush 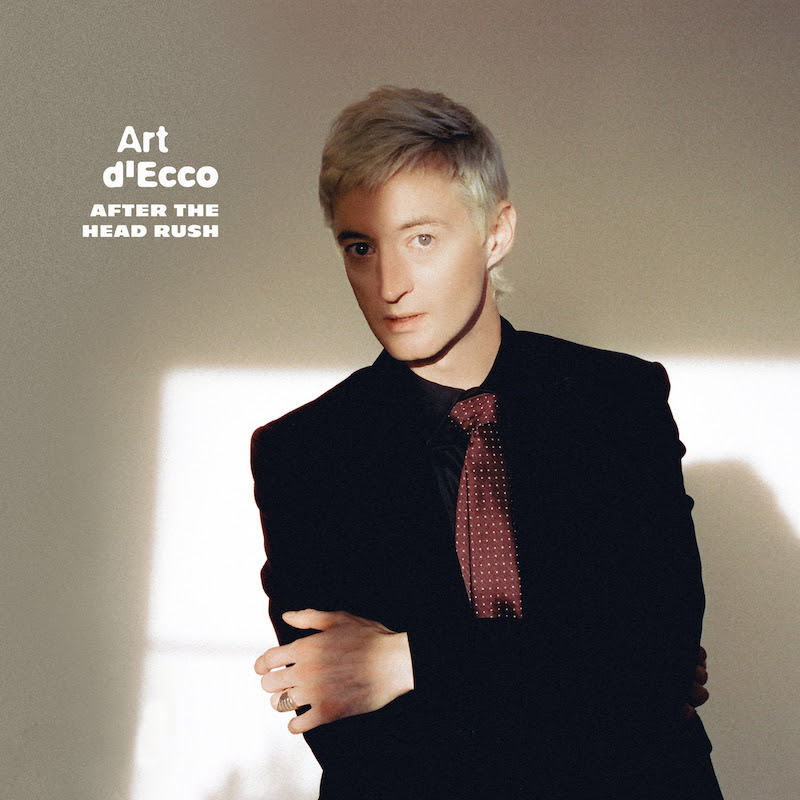 Art d’Ecco is back with his new release, After The Head Rush

Canada’s glam rock artist and producer Art d’Ecco has unveiled his new album, After The Head Rush, via Paper Bag Records. On top of this, he has also shared a new single, “Run Away.”

On the new single, Art says:

“Two lovers say ‘fuckit’ and skip town. Like Lula and Sailor in Wild at Heart.” He continues, “Run Away is a road trip song. I was trying to capture that feeling of autonomy and freedom one feels when they buy their first car and a whole new world opens up. Pile in, fill it up and skip town. It is a rite of passage for many, and a defining moment in my life came when I could finally break free and crank up that stereo.”

An unapologetic ode to the audacity and playful cynicism of growing up, After The Head Rush emerges like the shadow of a sundial cast between two time zones – one in the past, and one in the present. Infused with belated coming-of-age wisdom it sparks the dawn of a new era – inspired by a move to his hometown and the thrill of rediscovering the music of his youth.

“After The Head Rush is an album that was inspired by a recent move back to my home town of Victoria BC,” says Art “It’s a place where I spent most of my formative years – discovering music, learning an instrument, and falling in love with rock and roll. The album explores a dual timeline – the younger, youthful one that’s hopeful, curious, adventurous; and the current one – that’s age-worn and playfully cynical. As the album progresses, we flip-flop between the past and present, co-mingling perspectives and points-of-view, until learn that sometimes – things only seem better in the edited versions of memories.”

Listen to After The Head Rush below, and find out more about Art d’Ecco via our mini-interview.

You have unveiled your new album, After The Head Rush, what can you tell us about the writing process behind the album.

The album was inspired by a move back to Victoria BC, a place where I spent my formative years – learning to play guitar and jamming in garage bands. It’s where I fell in love with rock and roll.

I wanted to write from the perspective of how I felt discovering all that seminal music for the first time. The “head rush” of one’s youth- when things are less complicated.

But it’s also about being long past those salads days and reconciling this as a so-called “geriatric millennial” in an industry obsessed with youth.

The album follows your previous release, In Standard Definition, which was released approximately 12 months ago, how did you manage to put together two records in such a short period of time?

I guess I’m not good with sitting still? I’m constantly pushing to learn more about the technical side of music creation and the best way to learn is to put it into action – writing and demoing songs, recording them- using the compositions as a means to work on honing my skills. The home studio is just a test kitchen for the ears. And sometimes you burn a lot of meals chasing that perfect recipe.

On top of being a singer-songwriter, you are also a producer and did production on both of your recent albums. Walk us through the production process.

Once the demos are at a place where I feel comfortable showing them to the band, I’ll set up a week of pre-production where we hole up in a rehearsal space and workshop them, learning them as a group. I’ll just sit back and listen- objectively, critically. I’ll call out tempo changes, or throw some audibles at the band in real-time.

From there, we head to the studio and things get elevated to another level. I’ll bring in an engineer so I can roam around and coach and direct like a conductor.

Once the beds are done I’ll shrink the group down to just me and the engineer and start working on the vocals, synths, guitars, and overdub various groups into the fold (like the horn section). On ATHR I had a lot of help from my guitar player (Connor Head) who runs a studio in Victoria called Catalogue Studios, where we did a lot of tracking and took turns playing parts.

You’ve been in the music industry since 2016, releasing your first album, Day Fevers solo with a piano and an iPhone. Since then you’ve shared Trespasser in 2018, and the two newest albums in 2021 and 2022. What are the three major changes in your sound through these album releases?

Every new album is like a final exam to me- it’s where you’re tested on everything you’ve learned; technically speaking, how has your songwriting advanced or improved? Have you gotten better at expressing yourself? Have you achieved your sonic and compositional goals with this new batch of songs? And so on.

When I made Day Fevers I was just trying to see something through from start to finish. It was a patchwork of demos that I’d been crudely making from 2013-2016. So there was less fuss about how it sounded in the final approach, and more “let’s just get this finished”.

With Trespasser there’s a more focused and deliberate attempt at creating a sound- I invested a lot more into the home studio, and started taking the production seriously right from the demoing stage.

In Standard Definition was sort of a continuation of Trespasser but this time it was set through a special set of rules (100% analogue, record to tape), and lastly, with After The Head Rush I think I’ve reached the apex of “peak d’Ecco”. It’s a graduation to big, bright maximalist rock & roll. A punchy sparkly record from nose to tail.