POP Montreal is pleased to announce its first round of programming for the 2022 Edition.  Taking place from September 28 – to October 2, 2022, the annual non-profit curated cultural event champions independence in the arts by presenting emerging and celebrated artistic talents from around the world.

Stay tuned for additions to the lineup, as well as updates on Art POP, conferences, and discussions as part of the POP Symposium  Film POP, and Kids POP.

All show listings and tickets can be found here. 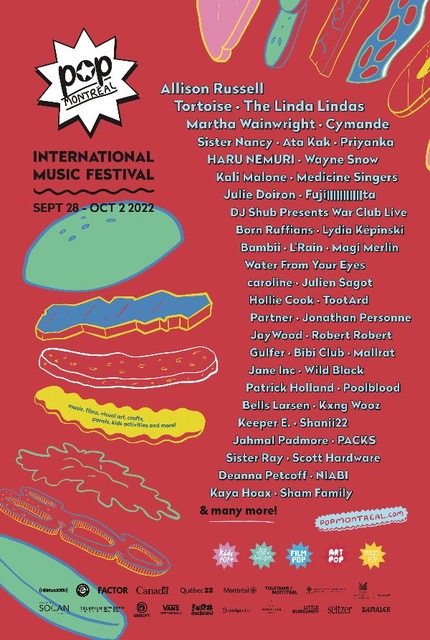 The festival was launched back in 2002 by friends and colleagues who had the desire to create an important and unifying cultural festival, POP Montreal is now entering its 21st year as an integral part of the Montreal festival circuit and the international music world.

Taking place in a bilingual environment, each edition offers an eclectic program of 200+ multidisciplinary artists, including 150+ musical artists and 50+ Quebec musicians to more than 45,000 spectators during 5 days.

The POP Montreal International Music Festival has become the trusted platform for local and international audiences to discover Montreal and its artists alongside cutting-edge headliners in an inclusive and community-driven environment.