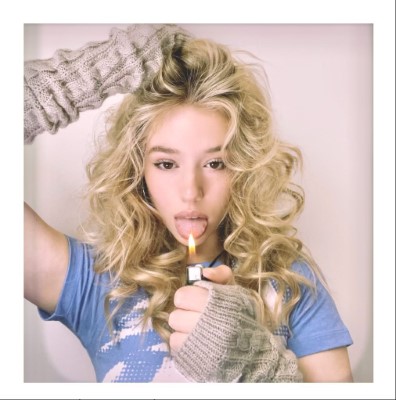 With a foundation of artfully dissonant industrial beats, “Megan Fox” tells the story of a young woman whose boyfriend compares her unfavorably with a poster of Machine Gun Kelly’s fiancée… And it doesn’t end well.

The song’s overarching theme of a talk-sing “argument” over sparse beats is interrupted by interludes of melody, allowing the listener to experience the narrator’s deep sorrow over being unfairly compared to a Hollywood actress and her stomping, justified rage. ‘Try my best, but I always just end up fuckin’/ Stressed I’m not tryna be your second best.’

It’s a song that reflects the prison of impossible female beauty standards with unflinching honesty.

“’Megan Fox’ is a fierce twist on the frustration of never feeling good enough in a relationship,” DiVenere said. “It outlines the insecurities of constantly being surrounded by unachievable standards of perfection.”

DiVenere penned the song based on a wounding personal experience.

“I felt like no matter what I did, I could never please this person, be good enough for them or even give them what they wanted, no matter how hard I tried,” she shares. “I poured buckets of my frustration out that day and wrote a mega-empowering song that I later jammed out to in my car and. let me say it was better than therapy.”

She adds that no one should have to be in that predicament of feeling not good enough in a relationship.

Listen to “Megan Fox” below, and stay up to date with Kayla DiVenere via her socials.