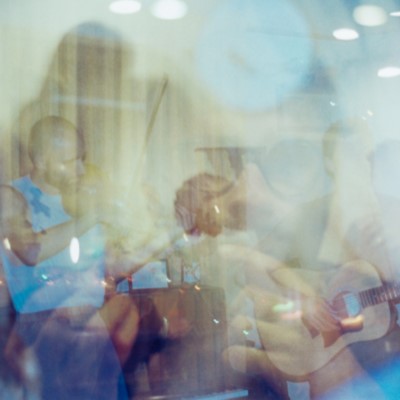 davis & james, the Vancouver-based duo made up of an indie-folk songwriter and a classical musician, has shared their debut single, “old remedies.”

Formed in 2021, davis & james consists of james and his background as an orchestral violinist, classical chamber musician, and session violinist ton a range of projects from math rock to alt-indie. In contrast, davis is a self-taught guitarist, vocalist, singer-songwriter, and frontman of the beloved but recently dissolved local indie band, Here North There.

Lyrically, the track administers a good dose of both fatalism and optimism, exploring how we cope amidst the chaos.

“It’s been a wild few years and counting, and this song is an ode to reaching for those things that don’t solve anything but get you through a difficult time. Something to relieve, distract, numb, delay, or forget about the mess at hand for a moment. Pretty much everyone’s mental health has been put to the test, in one way or another, and this song explores that state of seeking those tried and true remedies you know aren’t the best for you, but at this point, the immediate reprieve outweighs the predictable cost.

Music, making it or listening to it, is probably one of the healthier choices of remedy for getting through the pandemic or whatever else is going on at both the personal and societal level. So in a meta way, hopefully, this song can take its place as a remedy itself.”

Listen to “old remedies” below, and find out more about davis & james via our mini-interview.

At the heart of davis & james is an evolving conversation between vocals and violin. Voice and instrument mirror, echo, and contrast each other, passing back and forth the thread of both melody and meaning. Sam James brings the classical violin chops, Chris Davis brings the songwriting, and we both sing harmony.

You’ll like our stuff if you rode the 2010’s wave of acoustic folk, but you now find yourself listening to chill playlists of random artists with more synth and less banjo. We are based out of the city of Vancouver, on the unceded territories of the xʷməθkʷəy̓əm (Musqueam), Sḵwx̱wú7mesh (Squamish), and səlilwətaɬ (Tsleil-Waututh) Nations.

We chose old remedies for our first release as a duo because it had the most room for exploring a new sound. It started with our usual jams on violin and guitar, but through the demoing process, we found that the main guitar riff could be reversed and the ‘sonic mirror image’ could be layered over top. This opened a pandora’s box of playing with more electronic/contemporary pop elements: synth bass, ambient electric guitar, classic 808 drum machine, and then we doubled up the vocals/harms to complete the vibe.

Lyrically, it deals with coping amidst the chaos- that state of seeking those tried and true remedies you know aren’t the best for you, but at this point, the immediate reprieve outweighs the predictable cost. Music, making it or listening to it, is probably one of the healthier choices of remedy for getting through the pandemic, or whatever else is going on at both the personal and societal level. So in a meta way, hopefully, this song can take its place as a remedy itself.

At the start of the pandemic, we were both playing in another band that dissolved due to the lack of shows and people moving on. The two of us kept jamming and writing until we realized that we had a new project on our hands. So the absence of figuring out how to keep a project going gave us the space we needed to slow down and create a new one! Our first shows as davis & james were house parties in late 2021- and luckily this spring and summer are turning out to be more open to public performances/gatherings. So we are hitting the road this summer for a small tour of Western Canada.

We are both big fans of Leif Vollebekk, whose music really inspired us to really focus on creating a vibe over anything else in a song. It would be a lot of fun to play a show with him.

Since this is a new project, our goal for 2022 is to start connecting with the music community and listeners – and really just be in the moment, appreciating the possibility of sharing music with others and meeting new faces along the way.