Kriss the Sky – Five Questions With 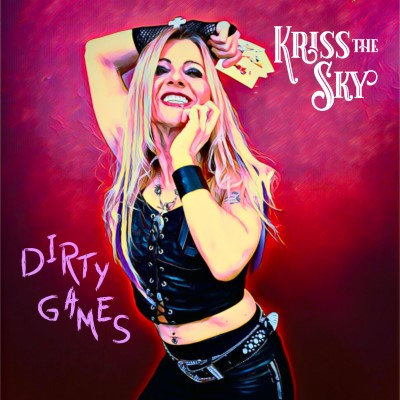 Kriss the Sky is taking no shit with her latest single, “Dirty Games.”

Kriss the Sky (Kristina Gasparic-Block), a veteran rocker from Saskatchewan, is back with her new single, “Dirty Games.”

On this track, Kristina calls out those who are disrespectful towards women.

“I speak for all women in saying I want to show the world that we are strong and won’t tolerate disrespect in any situation. This song has attitude,” Kristina says

The chorus for “Dirty Games” will be chanting for hours after your first listen. It’s a song with a message that will make you feel like you could take on the world.

“The lyrics of this single should release listeners’ playful but sinister side,” Kristina says.

Listen to “Dirty Games” below, and find out more about Kriss the Sky via our Five Questions With segment.

Hello Canadian Beats readers! I’m pleased to introduce myself to you. Warning: my story is a little crazy, hahaha.

I’m Kristina Gasparic-Block, aka Kriss: founder, songwriter, lead singer, keyboardist, and rhythm guitar player for my project, Kriss The Sky. I come from a long line of musicians in my family. When I was 6, my parents enrolled me in organ lessons, which I continued for 11 years while singing to my favourite artists. Growing up, I loved writing stories and poems, which I put into songs. I loved all kinds of music and was a huge bookworm.

When I was around 8, my parents, brother Johnny and I played ethnic music as a family band around Saskatchewan, Alberta, and Manitoba for the Croatian community festivals; Johnny and I are first-generation Croatian Canadians. During this time, people asked us to play for weddings and cabarets. We eventually expanded into playing in nightclubs around the province, covering rock, pop, and country music.

When I started grade 9, Johnny and I formed a rock band, covering rock and progressive genres from iconic bands such as Van Halen, Rush, and Boston. We played gigs in most high schools around the city and events around the province. We were kept busy between both bands playing almost every weekend and often playing gigs Monday through Saturday. I didn’t have much free time to party with my friends, that’s for sure.

In grade 12, I earned my Group Fitness Certification, and after graduating high school was asked to tour with a cover rock band. We made our way from Manitoba to the West Coast and up to the North West Territories and the Yukon, gigging about 300 days a year. Every young aspiring musician’s dream!

After a few years, with much soul searching, I returned home to earn my Music Education Degree, with a major in piano and a minor in drama. At this time, I re-joined my parents’ band, was active in Musical Theatre, and also earned my Personal Training Certification. I was lucky to have earned a living during University doing all that I love to do!

Upon graduation, I joined a local cover rock band called Sonic Orchid and soon after took over the name and its leadership. During this time, I was writing music, and Sonic Orchid released a self-titled EP in 2005, and a full-Length album called Love & War in 2008. We played hundreds of shows around the prairie provinces for many years, doing both covers and showcasing original material. Being extremely busy teaching band in schools full time and working in the Fitness club in the evenings, I took a long hiatus from writing.

But, in 2019, when the global pandemic hit, writing rekindled for me, and I took the plunge to rebrand into Kriss The Sky. This journey has been very exciting so far!

This song is about female empowerment and standing up to those who are disrespectful toward women. I originally wrote this song many years ago in my hotel room right after playing a gig; the night’s events were its inspiration because I was pissed off, and I needed to let it all out. As a female musician in rock music, some people, especially men, didn’t take me seriously and were quite disrespectful towards me back then.

My goal is to empower women to be confident and strong and stand up for themselves. Thankfully though, the music industry is changing, and there is a great community of amazing female artists getting the attention they deserve. Dirty Games sat for a long time, so I rearranged it before recently recording it.

The pandemic has been a massive challenge to the music industry. Still, there have been innovative and alternative ways to keep in the public eye considering live music was not possible. I took that time to research and study the music business and how to stay relevant.

In the past, I was not overly active on social media. I increased my social media presence on Facebook, Instagram, and YouTube by creating home performance videos, singing covers, and presenting snippets of my writing process, using my piano, keyboard, and home recording software. My husband, Stu Block, an internationally successful vocalist, and I also did some live streaming performances from home, which was a blast!! The result of this was that we formed a music duo, covering multi-genre hits and a few of my softer original material.

I used the pandemic as an outlet to recreate myself and do what I’ve put aside doing for years. It’s been quite the journey! So now, thankfully, things are opening up, and Kriss The Sky and our duo are performing regularly.

This is a tricky question because there are many great Canadian artists! So, it’s a toss-up between Heart and Rush, as they are both huge inspirations for me. But since I have to choose one, I’ll side with Rush. Being a singer, songwriter, and keyboard/organ/piano player, Rush has always been a huge inspiration to me with their incredible musicianship, eclectic, fantastical lyrics, early blues/hard rock, and later complex/progressive compositions. It would be an absolute DREAM to meet them.

My goal for 2022 is to write and begin recording music for an EP in the rock genre for 2023. I plan to release another single in the late fall of 2022; a more heavy acoustic style blues/rock piece. I also plan to continue booking live shows and live streams while increasing my social media presence. And, of course, to keep working on myself as a musician and businesswoman.