Home / Interviews / Five Questions With One In The Chamber

Five Questions With One In The Chamber 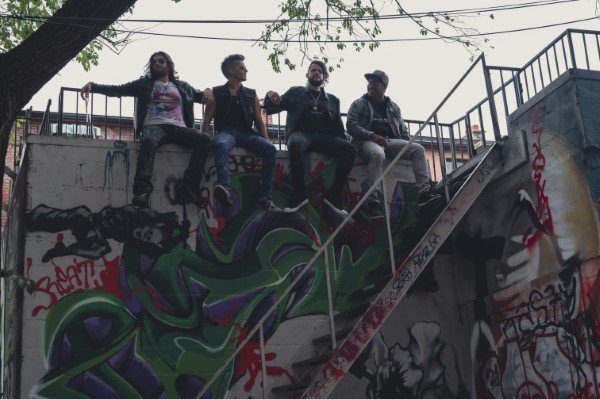 Toronto, ON-based band, One In The Chamber is back with their second studio EP, Reload, which follows their 2018 debut EP, I’ve Got Something To Say…

They released two singles in advance of the release, “Blow” and “To The Gallows”, which left fans wanting more from the band.

Reload is One In The Chamber’s answer to the new and growing wave of rock & roll driven by the likes of Greta Van Fleet, Dirty Honey, The Wild, and Crown Lands. Recorded in 2020 – pre-pandemic – the FACTOR-funded EP saw One In The Chamber return to Phase One Studios to record with producer and engineer, Murray Daigle, and engineer, Mike Smith. The result is a hard-hitting, 5 song record that feels nostalgic – like flipping through an old crate of vinyl – but fresh enough to elicit a sense of excitement and surprise.

The band has also been chosen as one of the bands in the 2022 97.7 HTZ FM Rocksearch. Check it out HERE, and give One In The Chamber a vote!

Check out “Reload” below, and find out more about the One In The Chamber via our Five Questions With segment.

Gerrod Harris: We’re One In The Chamber, a dirty rock & roll band straight from the heart of Toronto.

Christian Dotto: Glad to be featured on Canadian Beats again. Thanks for having us on.

Christian: Releasing Reload has been a huge success for us, so far, as was our exciting pre-sale campaign, leading up to Reload’s release. We feel that this music is our best work yet, and are thrilled to see that it’s being received so well.

Gerrod: It’s been a challenge for sure, but we were fortunate enough to have recorded Reload back in 2020. We kicked off the pandemic with the release of “Blow” and “To The Gallows” – both in 2020. We also had a couple of really cool shows when we could, including live streams through 101.5 The Wolf FM and the Mississauga Arts Council, as well as in-person shows in the last year, including Voodoo Rockfest, a pair of sold-out Toronto dates, and our first theatre performance.

Christian: I gotta say, I think Todd Kearns of Slash featuring Myles Kennedy and The Conspirators, and Toque would be great to work with, as a fellow bass player, fantastic vocalist, and all-around cool guy.

Christian: We have an exciting year planned for ourselves and our fans, with our goal of celebrating Reload. We’re planning to play as much as we can and visit our favourite cities within Ontario and beyond.

Gerrod: It’s a really exciting time. We’re playing catch-up on the last two years and have a bunch of shows lined up for the summer! Even better, we just made the top 16 of 97.7 HTZ FM’s Rocksearch. There’s plenty of new stuff on the way – it’s truly an exciting time for us.