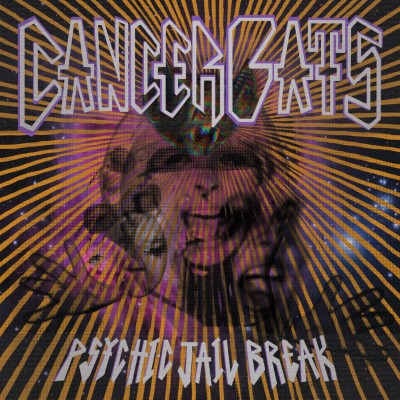 The energy on this one is damn palpable. But seven full-length albums (and then some) into Cancer Bats’ career, that is to be expected. On Psychic Jailbreak, the Toronto group strongly deliver all the elements they have become known for: snarled but consistently discernable vocals, pummeling drums, crunching guitar, and thundering bass which collectively pack one hell of a punch.

The continuation of their legacy is clear from the get-go with “Radiate,” a powerful opener with a chorus that begs to be shouted along to. The rest of the songs are likewise hardcore and frequently intense, but also quite a lot of fun. “Lonely Bong,” for example, is a heavy while somewhat amusing relation of world-travelling anecdotes, with an emphasis on making the most of what life throws at you: “Love the best but enjoy the worst. This road dawg life is a blessing, not a curse.” In fact, the release as a whole contains plenty of positive messaging against a background of cacophony and global bullshit, like the anti-asshole, pro-self anthem “Friday Night,” which also features some of the best riffage of the album. When it comes to standouts, though, “Hammering On,” with guest vocals from Brooklyn Doran, is an obvious candidate, being more restrained in pace and particularly melodic compared with anything else on the album, or within the band’s discography at large.

Psychic Jailbreak is a sonically rollicking reminder that the world can be an unpredictable and sometimes fucked up place, but it’s up to us how to respond to that, and to stand up for ourselves against what brings us down. The album makes a great outlet for reconstituting any pent-up angst you might be holding onto into something meaningful. With that kind of value, Cancer Bats keep on making music as impactful as ever.