Home / Promos / The Arctic releases cover of Backstreet Boys original, “I Want It That Way”

The Arctic releases cover of Backstreet Boys original, “I Want It That Way” 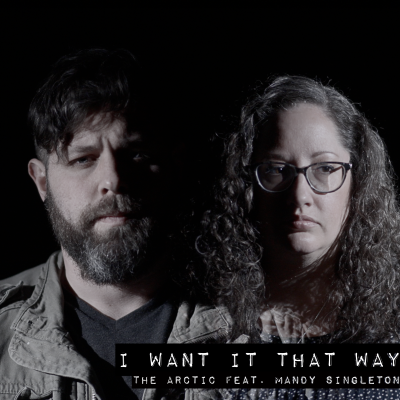 BC-based The Arctic never set out to make a cover of the Backstreet Boys 1999 hit “I Want It That Way”, but the end result turned out more powerful than he could have imagined. The song was created after it won a cover contest for The Arctic’s Instagram page. This version is a darker, alternative take on an untold love story.

The cover begins with a subtle synth line and some solemn arpeggiated guitar chords as Vandevert sets the foreboding tone with his weighty voice. The magic really happens as singer Mandy Singleton harmonizes with Vandevert, shifting the atmosphere to one of regret. Who knew a dance song, with lyrics the Backstreet Boys even admit mean nothing, could be so dark.

“When it won, I had a great chat with my creative and wise sister on whether I should parody the song or do it seriously,” he says. “She said ‘if you’re going to do it seriously, there are only two ways it will work. 1. You blow away everyone with your talent’ — I laughed and said that wasn’t going to happen. But then she said “ 2. You make it dark and command attention” and that struck a chord with me.”

The cover will find love from die-hard fans of the original (like Singleton) and new music lovers who deemed the Backstreet Boys as cheesy, bubblegum pop stars.

This isn’t the first time Vandevert has reimagined a song. On top of his own music, previous winners of his Instagram cover contest were Coolio’s “Gangsta’s Paradise” and The Beatles’ “Come Together.”

“I’m a firm believer that the music can completely change the meaning of the lyrics,” says Vandevert.

The track also arrives with a fresh new music video made by The Arctic.  It begins with Vandevert playing an old film projection featuring apparitions of himself and Singleton singing the track. Check it out below, and stay up to date with The Arctic via his socials.