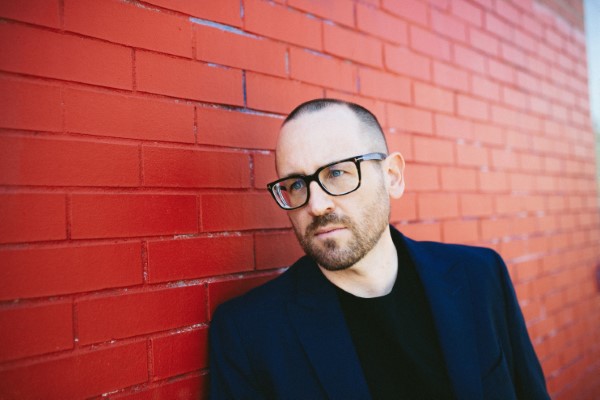 Toronto, ON-based artist, J. Mann has recently unveiled his new single, “A.I.”, along with a video to accompany the release.

For the video, J. Mann enlisted Marlon Chaplin and Michael Greggain, the result is a pretty epic human to robot transformation. Add in that the video was filmed in a factory that makes machines, Mecon Industries, and you have a video nothing short of incredible.

Check out the video below, and find out more about J. Mann and the release via our mini-interview.

I wish I had some catchy “elevator pitch” to neatly and concisely encompass my music, but wouldn’t you raise your eyebrow if I did?

Saying that, I did come up with “indie rock that spins like a bicycle wheel.” How’s that? Any eyebrow raising? But, what, I ask myself, does that really mean? Maybe something that feels good, like you’re getting a workout that you actually enjoy.

By way of my backstory, I started writing songs in my teens and the very first time I played for an audience was when I was 19 in this dusty old place behind a guitar shop in London, UK. When I moved back to Ontario’s London for university, I started playing locally as “Man with a Van” and then in short order adopted the name “J. Mann”.

In the aughts, I moved to Barcelona, Spain. I joined a band called “The Customers” and that’s when I finally clued into the brilliance of playing in a band. Since being back in Canada, I’ve released a couple of albums, the most recent of which is this year’s Take the Wheel, somewhat of a soundtrack for a script I wrote a few years ago.

You recently unveiled your new single, “A.I.”, what can you tell us about the writing process for the track?

Part of what I learned from my bandmates in Barcelona was that sometimes, songs take quite a while to form. I was always trying to rush things previously — both the songwriting and recording.

All the songs on this last album went through a ton of iterations and I pushed my own patience by slowly chipping away at each song over a number of years. The first part of A.I. starts with simple chords (“G” and “Bm” for those interested) and the melody formed through simple experimentation.

Many months later, I came up with the middle part originally thinking it was a completely different song. It took me a while to realize I had just rewritten the same song using the “G” and “Bm” with a slightly different melody and tempo. What does one do? Connect them somehow with a prog-rock break!

Initially, the words that started to emerge centered around the idea of being on auto pilot. I was influenced a bit by a radio interview on CBC about our increasing propensity to ask major life-altering questions in Google searches. I realize this is oft-treaded territory but something about the idea of a system knowing your activities, knowledge gaps, and maybe even needs and wants better than those around you (and even yourself) created the chorus: “you know more about me than family or friends, more than I know myself and how I’ve lived.”

I went through a ton of different of lyric versions and then sent it to my poetically-inclined friend Nasser Hussain. Nasser rewrote the verses and came up with one of my favourite lines on the whole album, “A.I., take the wheel awhile,” which ended up forming part of the album’s name, “Take the Wheel”.

I enlisted my pals Inaam Haq on bass and Cam de Laat on drums and they really helped me “break in the song” both in practice and in a couple of live shows. At one show, I was downright chuffed when a guy from another band said, “I feel like it’s Space Oddity for our times.” Now, don’t get me wrong — I’m not comparing myself or the song to the brilliance of David Bowie, but the comment certainly put a spring in my step.

Inaam came on board to co-produce the album and we went into David Plowman’s Patchwork Studio two days before COVID shut down the world. As we were doing the drum tracks, we looked at each other and said, “I want to give you a hug man, but…” Little did we realize what the future held.

Inaam and I did the rest of the recording at our home set-ups and when COVID settled down briefly the next summer, we went into an isolation booth where Inaam coached me on singing multiple takes, “another! again! another!” He then came up with some soaring synths at the end and gave me the idea to put in a warm electric piano.

I had really wanted to get a bassoon in the prog-rock break but thought there was too much low end already, so asked another friend Patrick Tevlin – an incredible jazz musician – to try out some trumpet. The trumpet ended up being a key piece I think since it simultaneously harmonizes and fights against the synths providing that tension between the human and the computer.

Was that description far more than you bargained for when you asked the question!?

You’ve also shared a video for the single, what was the highlight of the video shoot?

The video shoot was an absolute blast. It was a true pleasure to work with the director, Marlon Chaplin, and the videographer, Michael Greggain, in such an eye-catching backdrop – the Mecon Industries factory.

When Marlon had first proposed the idea of transforming into a robot/machine, we spoke a lot about potential locations and we kicked around the idea of an old printing press. Then, we thought why not film it in a factory and even better, a factory that makes other machines. I contacted a few contract manufacturers in and around Toronto and was delighted when I got a response back from Mecon Industries.

Having the tranquility of shooting in such an expansive and textured environment was really the highlight. I remember Marlon saying things like “this place reads so well on film” or “that machine is ‘juicy’!” Again, a massive thanks to David at Mecon Industries.

You worked with Marlon Chaplin on the video, what was that experience like?

Top notch. From the first time we spoke on the phone, we hit it off, talking non-stop about music and film. I had stumbled across videos he had done for his own music and was taken with the quality and his love of storytelling. I dig how he digs into each video as if it’s a short film.

While we were throwing around ideas, I mentioned a few things and then he said, “ok, here’s the thing. I’ve had this idea for a while where a guy transforms into a robot. Are you into that?”

Naturally, the cinematic element was big for us and some of the film references that were in the conversation were Spike Jonze’s Her and Tim Burton’s Edward Scissorhands.

At first, I wasn’t exactly sure about his vision for the mask. When we met in person, after a delay due to COVID, I brought a bag of old electronic items and pieces and he politely said, “I imagined something a bit different.” Luckily, I left it in his hands and he constructed the mask you see in the video; the mask reminded me of the poster for the Almodovar film The Skin I Live In.

On the day of the shoot, he said, “I’m going to direct you quite a bit,” and I was quite happy to comply. Between takes, we kept up our obsessive music chats and somehow got onto The Clash’s blistering London Calling. At one point, we started spontaneously singing out lines from the album. Then, right as we were on our last shot, a random radio in the factory that we hadn’t noticed until then started playing “Train in Vain.” Was it a sign?

I plan to hit the road and do some solo and band shows in Toronto, London, and Windsor this summer. Time and resources permitting, I plan to do another video, hopefully carrying on with the overall cinematic theme of the album.