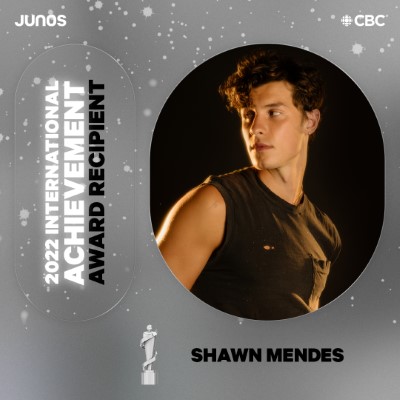 For almost a decade, GRAMMY-nominated and 11-time JUNO Award winner, Shawn Mendes, has been capturing the hearts of millions around the world and has topped international charts with his poignant but powerfully catchy singles and a string of number one albums.

Now, to honour his achievements outside of Canada, the Pickering-native has been named the recipient of the 2022 JUNO International Achievement Award.

In a statement to the press, Allan Reid, President & CEO, CARAS/The JUNO Awards, says “from his work as a singer-songwriter to the creation of The Shawn Mendes Foundation, he has demonstrated an incredible commitment to music and cultivating the next generation of creatives. We are grateful as Canadians to claim Shawn as our own and can’t wait to commemorate all of his achievements in person at this year’s JUNO Awards.”

The JUNO International Achievement Award recognizes Canadian artists who have attained exemplary success on the world stage. The award looks to honour Canadian talent who have not only topped charts but who have raised the profile of Canadian music around the world. Throughout the 51-year history of The JUNO Awards, the International Achievement Award has only been given out eight times, with the most recent presentation in 2018 to Arcade Fire.

Mendes will receive the 2022 JUNO International Achievement Award on May 15th, as part of the 51st annual JUNO Awards broadcast live from Toronto’s Budweiser Stage; which will also mark the JUNO Awards return to the live stage after the cancellation of the event in 2020 and 2021.

The 2022 JUNO Awards will broadcast live across Canada at 8 p.m. ET/5 p.m. PT on CBC TV, CBC Gem, CBC Radio One, CBC Music, CBC Listen, and globally at CBCMusic.ca/junos. For more information and to keep up-to-date with all the 2022 JUNO Awards celebrations, please be sure to visit www.junoawards.ca.