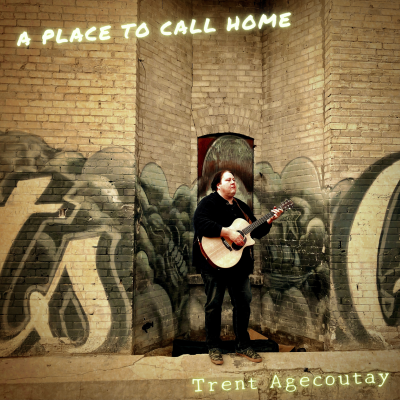 Alberta-based Indigenous singer-songwriter, Trent Agecoutay‘s love for songwriting comes to him honestly, as he watched his dad from a very young age, sitting at the kitchen table and writing songs. He loved to sit in the next room and listen to the stories his dad would create. This, along with his love of music and storytelling eventually inspired him to start composing his own songs. He also has learned through the years to produce, through trial and error. He has produced two albums for his father’s band, Duster, as well as both of his solo projects.

On May 1, Trent unveiled his new album, A Place To Call Home. He wrote the album to shine a light on Indigenous homelessness and each song is a different moment in time in someone’s healing journey.

So sit back, take the time to listen to each track, and hear the story behind each. My personal favourite from the release is “Couch Surfing”, it’s got a great beat that possesses a gritty country feel, as well as rock undertones.

“The song talks about lack of resources, the cycle of poverty, and the feeling of being unsafe in a strange place.”

Check out A Place To Call Home below, and find out more about Trent via our mini-interview.

I am an Indigenous Singer/Songwriter, and country music has been part of my DNA, my Mooshum, my Dad’s Father, was a fiddle player, and his legacy in music was passed down to me from my Dad. The first time I stepped foot in a bar, I was only eight years old. It was a Sunday morning and taverns weren’t permitted to open on Sundays, but I was there to help my Dad load his music gear so he could head out to the next gig, somewhere down the road. I have fond memories of my childhood being filled with music, and musicians would regularly come by to jam or write songs with my Dad. I eventually started playing in a band called Duster with my Dad when I was 19 years old. My younger brother Bryce eventually joined the band and we performed together for almost 20 years. When the old man retired in 2014 I started putting out my own music.

You have shared your new album, A Place To Call Home. What was the writing process like for this release?

I actually started the process just before the pandemic began. With the subject matter being so heavy, I walked away more than once. I treated the whole album like it was one big story and each song is a chapter in that story. The themes I explored are lack of opportunity in home communities that lead many Indigenous people to travel to bigger cities for better opportunities. I also talk about the struggle to secure housing, the dangers of living on the street, I do songs about intergenerational trauma and addictions, but then the album moves towards a rediscovery of culture, finding your way home, and being grateful for survival and the experiences that lead you to be a healthier person.

You have said you wrote the album to shine a light on the indigenous homeless, care to elaborate?

I was a Housing Outreach worker with Homeward Trust in Edmonton and I was actively securing housing for people experiencing homelessness. I was doing my best to help my community but the statistics were showing that although we were housing a lot of people, the percentage of people experiencing homelessness that identified being indigenous was increasing, and I had to start asking myself why? I was witnessing the effects of intergenerational trauma every day as a helper on the streets of YEG, and I had family members experiencing homelessness, and it was a lot to take in, so I walked away from the project for a whole year. When I had time to reflect on what I had experienced I realized that hope is a powerful thing. I had witnessed people coming off the street and being successful and for Indigenous participants getting connected to their culture and being able to identify with who they are and where they come from is an important part of their healing journey, and because of this, each song from this album document a different place in someones healing journey.

What song on the album would you recommend that people listen to first?

My favourite song on the album is “Kokum’s Stories”. The song has an almost Celtic feel mixed with a traditional Indigenous drum and a traditional singer who goes by the name of Old Rock Man. The song also features the voice of my Kokum (Grandmother) Agnes’s voice, She passed a while ago now and I was fortunate enough to do a video interview with her when she was in her eighties so I harvested that audio and worked it into the production. My Aunties all told me they tear up when they hear the song because no one has heard her voice in fifteen years.

More music and more playing. I also have a band I am involved with called NiiJii and we have an EP scheduled to be released at the end of Summer. We are currently planning a fall tour out West, and we have some dates here in Ab coming up in late May and June.