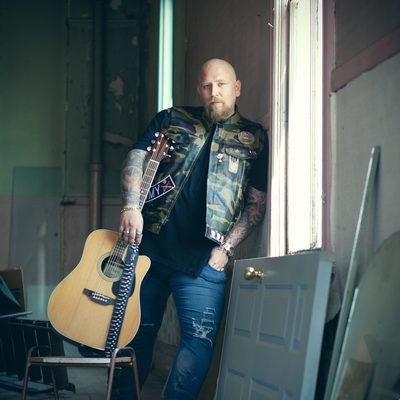 Graham Trude’s story is like no other country artist. It was a very long and difficult path to get where is he today. Trude is a singer-songwriter with a characteristically big voice, an even bigger heart and he calls Tiny Township, ON his home. Here’s his story.

In 2007, Graham signed up to be a was sent to Afghanistan for a challenging tour of duty. When he returned to Canada, he joined the military reserve and began using songwriting as a therapy to deal with his trauma. He was a member of the Nishnawbe Aski Indigenous Police Service and from 2017 to 2019, he toured with “The Singing Soldiers,” a band he formed, partnering with Wounded Warriors Canada, to spread awareness of PTSD in veterans and first responders.

In 2018, Trude’s own PTSD came back to haunt him, when he hit rock bottom battling his demons of war by self-medicating through alcohol. But with the support of his family, and lessons learned from previous treatment, he was able to recover, using music as medicine and daily songwriting as his personal therapy. Trude is now embarking on a full-time music career as he gets ready to release his debut EP in the coming months.

And, this emerging Canadian country singer-songwriter is beginning his music career with his incredible new single “PTSD” which is out now on all streaming platforms.

I had the opportunity, through Canadian Beats, to chat with Graham Trude via email about his single and some great things happening in his life. Check out our questions and his answers to learn more about this amazing human.

Wow! I listened to “PTSD” and was immediately struck by how hard yet perhaps healing this song was for you to write. It was a long journey for you to get to this stage, I imagine. Can you please tell us about that journey and how this song got you to where you are right now mentally and emotionally?

Thanks so much! Absolutely, I began the military in 2007 training all over the country and some foreign countries. In 2009, I went to Panjwai Afghanistan with my army regiment, LdSH (RC) out of Edmonton, AB. When I came home, I became a songwriter and musician full time but as we all know this is a hard career to pay the bills with when you are new to the scene. In 2014, I joined the Nishnawbe Aski Police Service which was a fly-in First Nation in northern Ontario. I would work two weeks on and two weeks off. I then transferred to Orangeville Police Service and ended my law enforcement career due to some untreated mental health issues from my previous service. Mentally and emotionally, I was at a point of planning my demise until I sought help from Edgewood treatment facility in Nanaimo, BC. To this day I practice the principles I learned and I am mentally and emotionally happy and grateful.

“PTSD” was produced by my friend and renowned producer, Jason Barry, in Moncton, NB. Jason is a massive supporter of the military and I could not have thought of someone better than him to bring this song to life. As many know, Jason is a multi-award-winning producer and guitar player but most importantly, an incredible human. (I totally agree with Graham Trude on this statement.)

Tell us what you hope listeners will take away from this single.

I hope that some may find solace or understanding with it. Many individuals do not know that the leading cause of death in soldiers and first responders in North America is suicide. This is sad, but the reality, and the world I lived in for a long time.

Let’s chat about your life …

As a former Afghanistan war veteran and police officer, how and why did you make the decision to leave that all behind you to embark on a full-time music career?

Really, it came down to that life-or-death decision. It was a decision of, do I continue like this, never see my family, drinking binges, dead by 50 or suicide. I also had untreated mental health issues from my time in the military and northern Ontario. I got really tired of living in the world of death and destruction and wanted to love myself and people again.

Will The Singing Soldiers, partnering with Wounded Warriors Canada, still tour to spread awareness of PTSD in veterans and first responders now that Canada is opening up again?

Unfortunately, The Singing Soldiers are no longer, but I will never stop spreading awareness for wounded soldiers around the world. I have recently signed with a new management company and I am excited and honoured to work with Stereo Dynamite Music Company out of Toronto. Touring is being planned as we speak and I will always be a soldier spreading as much hope and awareness as I can.

Last but certainly not least. If you could have one thing that your fans could remember about you, what would it be?

That I never gave up, and neither should you. You are NOT alone and so many people are here for you and to support you. Life is a journey so please enjoy the journey and don’t be afraid to live in your emotions. Connect with your inner child and be an immature kid as much as you can. Life is too short to get mixed up in other people’s bullshit. Thanks again for having me. Much love to Canadian Beats.

We, at Canadian Beats, thank you Graham so much for taking the time for this interview and sharing your life story. It is so touching and relevant right now. We wish you continued good health and all the best with your single and upcoming album.

It’s important to get help if you or someone you know is going through a crisis or thinking about suicide. Help is available. Learn about the resources available to you HERE.