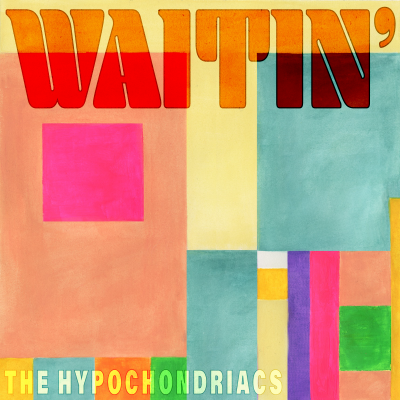 A roller-coast of songs like, “Highway #2” singer Josh Bravener really hone in on his yodelling chops & “Waitin’” (album titled track) has the horns & female vocal harmonies from Kelly Waterhouse & Jeaninne Gallant take center stage. Along with some blusey guitar, from the talented, Connor Fox.

Check out the album below, and find out more about the band via our mini-interview.

My name is Josh Bravener, former subpar Elvis impersonator, currently the frontman of The Hypochondriacs!

You have shared your new single, the title track from your upcoming album, “Waitin’”, what can you tell us about the writing process behind this track?

The writing process to the song Waitin’ was supposed to be a nod to old Doo-Wop music intertwined with my own sad love story. What you hear is what you get. One night I was quite literally waiting for my then girlfriend to call me back and she never did. At that point, I walked to her place and that’s when she broke up with me (for the second time).

You are set to unveil your new album, Waitin’ on April 29, what can you tell us about the making of this release?

The making of our album release has been a long time coming. For years we were playing a lot of country music, but as the band grew in size, and we added horns and keys this new sound kind of naturally fazed into the sound of our new album “Waitin’”. A lot of the songs you hear on the album started out as slow country songs, but when you bring them to such an amazing and talented group of musicians, the songs take on a life of their own.

You’re performing at the 2022 ECMA’s in Fredericton this year (May 4-8, 2022), how does it feel to play that stage in your hometown, after such a long break from shows due to the Pandemic?

Playing at the ECMA’s this year is such a treat. It couldn’t have timed out better that we would have this new album to show everyone AND it’s taking place in Fredericton right after COVID restrictions are lifted. I am sure people, including myself, are really looking forward to the “normalcy” of a proper weekend of music and ECMA’s is a great treat to start that out. I’m just excited to show people all over the East Coast how much Fredericton has to offer as a small little conservative city.

You have a slew of tour dates throughout May and June, what are you most looking forward to when it comes to getting back on stage in front of your fans?

When it comes to these upcoming shows, I’m just most excited to head out on the road with all of my best friends, and go see all these friends and fans we haven’t seen in years. I think right now it’s hard to process, but I am sure once we set foot back on stage somewhere like Montreal, seeing all those old faces and hopefully some new, it will be very emotional.