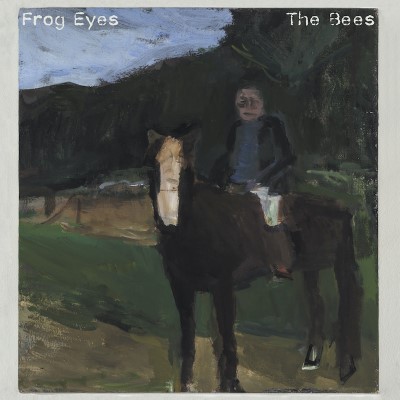 Frog Eyes recorded The Bees over four days: two days in March 2021 and two days in May 2021. They worked with musician, John Raham to engineer the album at Afterlife Studios. The result is ten songs that feel expansive—taking the listener on a whirlwind adventure to meet the ghosts of Frog Eyes past, present, and future—each track possessing the tempo necessary to incite a room filled with people to move. Inertia has no place here. All the energy of previous Frog Eyes records resides in The Bees, with the track “I Was an Oligarch” a triumphant reclamation of a time when nineteen-year-olds wore white belts and cut the hems of their pants, all for the sake of being able to dance with utter abandonment. The minor-key spells for which Frog Eyes is known are on full display in the track “Scottish Wine” and the return to what they know best is found most clearly in reclaiming their name back, as Mercer notes wryly, “can you ever really sound like anything but yourselves?”

The album features previous releases, “Rainbow Stew” and “I was an Oligarch”, along with eight other tracks, including my personal favourite, “A Rhyme for the Star”. As I listened through the album, there are many great tracks, but this particular one really stuck out to me. It’s a bit on the slow side and features an almost hypnotic beat, which always tends to pull me in. Add in Mercer’s vocals, and you have a track that I’d highly recommend.

Check out the album below, and find your own favourite track.

On top of this, the band has unveiled a lyric video for their new single, “The Bees”.

“Once I slept outside in a place where a river flows into the open ocean,” says Carey Mercer. “The low-lying topography makes this place vulnerable to tsunami waves, should an earthquake occur. At the top of the hill behind the river, there is an old dam with no seismic upgrades. This spot is about 40 kilometers from the Cascadia subduction zone. If an earthquake occurred, you might have a tsunami barreling in. You might also have a torrent of water and trees and concrete barreling down on you from the ruptured dam.”“I felt exhaustion lying there at the edge of the river. I had no automobile to get out. The song ‘The Bees’ is like stretching a piece of musical latex around the fear I was feeling. I was so tired from trying to get to this spot without an automobile. The safety plan was, if the dam burst, to just drive away. But what if you don’t have an automobile to drive? As I sing in this song: “Where is my guide?” As I dealt with my panic by panicking, or panic-attacking, I thought to myself, ‘Why do I resist?’ That is the last line of the song.”

I make albums with two other core musicians, Melanie Campbell and Shyla Seller, under the name Frog Eyes. We have been working on this endeavour since 2001.

You have shared your new album, The Bees. What was the writing process like for this release?

You worked with John Raham on engineering the album at Afterlife Studios, how was this experience?

He is fast and supportive and runs a wonderful space. The experience was the most positive argument for surrendering parts of the process to someone else.

The cover art for the album is a beautiful piece of artwork by Janice Nowinski, how did you decide on this painting for the artwork?

It hit me as soon as I saw it. It reminded me of my old paintings—this painting is much better, but a similar love of the energies that come from moving paint around?

The Bees celebrates the band’s collective 20th year of making music, how do you find things have changed since you began?

“Things” is a bit too vague, my friend! Assuming you mean the musical landscape: well, people’s livings have been devastated by streaming and tech banditry that really does nothing for the relationship between creator/creation and listener. The neo-liberal wasteland stretches out beyond the horizon. There is still, as always, a 100% possibility of making a profound connection with people through songs, the same as always. Music is still a profoundly riveting source, at its best. I still love it beyond words, and my fealty to it is strongest at this moment.