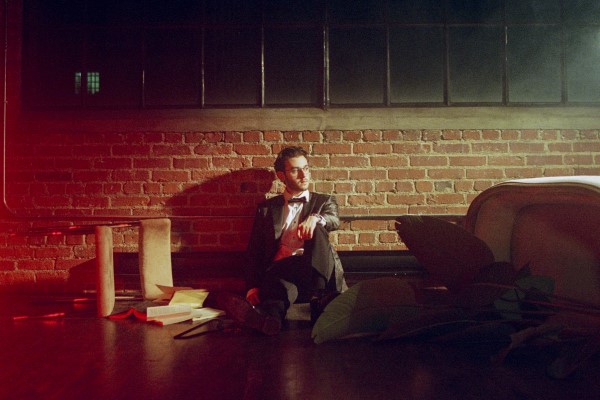 Toronto, ON-based singer-songwriter and producer, Chris Grey has teamed up with Allegra Jordyn for his newest single, “Dancing On The Edge”, from his latest EP, Together, but Barely.

Driven by a pulsing bassline, replete with an 80’s worthy synth solo, “Dancing On the Edge” is the moment of accepting the inevitable ending of a relationship and coming to terms with that.

Grey offers, “There is an understandable sadness but also a moment of savouring the last moments together.”

The video for the track, which Grey directed and edited, captures the irrefutable chemistry between he and Allegra while at the same time evoking an aching poignancy.

Watch the video below, and find out more about Chris via our mini-interview.

Hi Chris, welcome to Canadian Beats. Congratulations on the release of your EP “Together, but Barely”. You released several singles and music videos from the EP over the past year. How does it feel to finally have the EP out?

Thank you! It feels really good to finally have it out! I’ve been working on it for about 2 years now and have had a lot of different versions. I had about 30 tracks to choose from and narrowing it down to 6 was not easy!! I have been producing for some incredible artists over the last few years and that diversity of genres, ranging from straight pop to dark pop to R&B and Rap, has expanded my production palette and made this EP even more creative and satisfying. I’m excited to finally be performing these tracks for live audiences. It can sometimes be surprising to see which songs resonate the most with an audience.

The feature track, “Dancing on the Edge” is a duet with Canadian pop recording artist Allegra Jordyn. The two of you seem to have incredible chemistry! What can you tell us about the song, the music video, and your relationship with Allegra?

“Dancing on the Edge” was one of the last tracks written for my EP. I knew I wanted to bring some closure to the project and this song was the perfect ending. Allegra and I wrote this song before we started dating. We had been talking about how our past relationships ended, and that conversation ended up inspiring this song. I think writing the song really closed that chapter for us and helped us start a new one together. Initially, we had written it as a solo song for me but eventually realized it worked a lot better as a duet! The video went through a lot of different versions before we landed on this. The night before the shoot there was a last-minute cancellation, so we had to scramble to reschedule everything but it ended up giving me time to refine some of the finer details, which turned out to be the silver-living.

You had some amazing success with your song “Seamless” which is on the EP. Can you tell us about that?

That was honestly so surreal to me. It was one of those things where I posted something and thought nothing of it. Within a few days, it had millions of views on TikTok! Before I knew it, Seamless hit a million streams on Spotify! One of the coolest experiences though was performing it for The Recording Academy’s Press Play Series on Grammy.com. To be featured by them was a huge honour.

If you could put together your dream tour with any other Canadian artists, who would be on the bill and why?

What’s next for Chris Grey? Do you have any live dates coming up?

Yes, I do! I’m headlining the El Mocambo in Toronto on Tuesday, May 3rd which I’m looking forward to. There are also 3 other amazing artists on the bill (Allegra Jordyn, Ann@lise, and Chloe Florence) that I highly recommend you check out if you want to discover some great new Canadian music. I’ve been in rehearsals all week and I can definitely say it’s gonna be a great show. I’ve got some other performances in the works for this summer and I’m hoping to be on the university and college campus circuit across Canada this fall! And as for what’s next I’m not planning on going very long until releasing more music, so stay tuned.