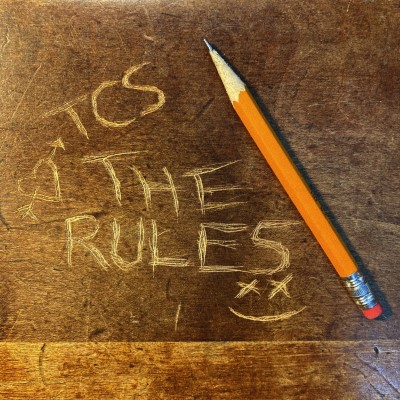 Nova Scotia-based band, The Corvette Sunset is back after a mental health break and losses and replacements of its members. While this is usually a tremendous loss for a rock band, lead singer Matt Steele and new lead guitarist Marcus Tracey rapidly bonded into a writing partnership over their mutual love of The Strokes, Weezer, Prince, and other big-riff, confidence-soaked rock acts across the decades. The band dropped “Matt Stelle and the” from their previous name, and the rest is history.

Now, they have unveiled their first single, “The Rules”, a tongue-in-cheek ode to stereotypical hetero relationships and stories gleaned from the “Am I The Asshole?” and r/relationships sections of Reddit.

In “The Rules”, a defiant narrator expresses annoyance at a suspicious partner, first asking “Was I talking in my sleep? / You’ve been giving me the heat again”, then proclaiming “I ain’t nobody’s fool / except a fool for you”, turning around in the bridge to snap “be a good boy / don’t say nothing wrong / follow the rules / and keep it to yourself” and then leaving the song on an ambiguous note in the final verse, making the listener wonder “was he, or wasn’t he cheating?”

“I thought a lot about stereotypical hetero relationships in media and IRL  when I wrote this song. You know, people like Jay Pritchett and Gloria Delgado from Modern Family who seem to thrive on biting their tongues and sneaking around and coming up with excuses to get out of trouble, or when I got married and some of the married men gave me tongue-in-cheek advice like “remember, your wife is always right, keep your mouth shut if you want to keep the peace,” etc. I just thought it was too good to pass up an opportunity to mix it all together – you love someone, but you have to keep a little mystery, but that can feed suspicion, which turns ugly, and the next thing you know your r/relationships reddit post is going viral on Twitter”

Check out “The Rules” below, and stay up to date with The Corvette Sunset via their socials.